Driver's side floor repair...on to the actual floor

It's been a month of a week.  I'm sure some, if not many, of you know what I mean.   Lot's of stuff going on...some of it not pleasant, but it comes with the profession.  With a trip to Baldwin, Michigan to close up the family cabin, then heading southeast to Battle Creek for my niece's wedding, and sticking around to do my annual fall trip to help my mom with things around the house, I've had precious little time to prep for the trip.  Grass needed cutting, the yard trimmed, getting the dog kenneled, cars serviced and now packing, it's been non-stop.  I wore myself thin and took a nap to feel better. (Harvesting has started and the corn and soy bean dust is killing my sinuses.)

I continued my packing getting all the tools and supplies I need to take north.  After moving the front floor pan out of the way to get to some other stuff, I thought, "Why not get started on that."  So I did.

First order of business was to clean up the cut on the floor itself.  I left the cut "rough" when I removed the old floor until I knew what I needed to get rid of. 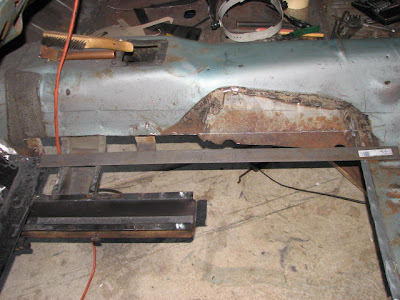 I used a piece of steel for a straight edge and marked the line off.  Then I went at it with my air saw.  I love that  tool!   When I got done, I had this nice straight cut ready to be cleaned up for a good weld. 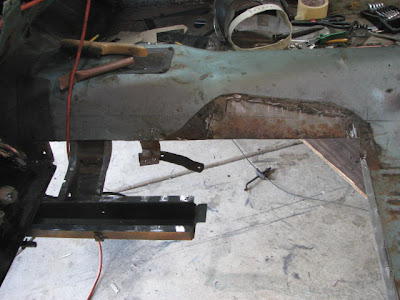 I lined up the floor with the inside of the rocker panel and used the existing spot weld marks as a guide to mark where I needed to drill my 5/16" holes.   This worked good since my weld and seam manual was rather sketchy on where the spot welds go. 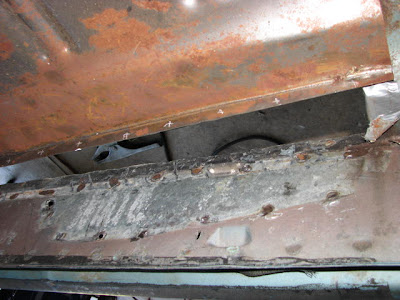 With the welds marked, I took the panel and center punched it for drilling.... 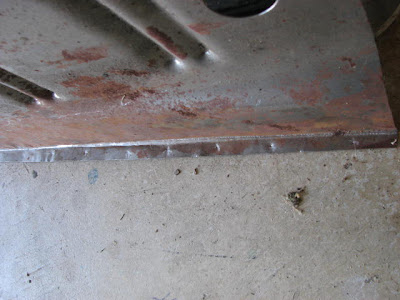 Then came the fun task of drilling the holes.  I bought a really good DeWalt drill bit that is stepped with a build in pilot drill.  It is slick and saves a ton of time.   I used a piece of old deck board (remember that project?) as a backer and drilled out the holes. 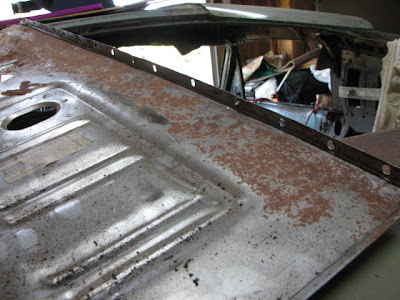 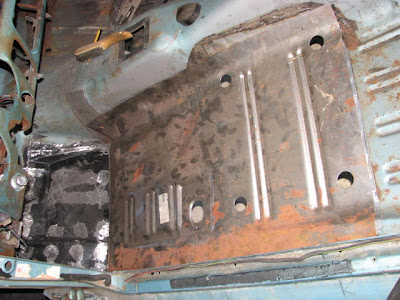 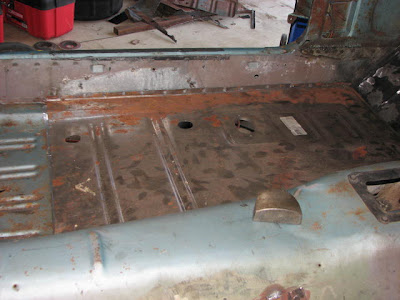 It's not too shabby, but I need to work on the transmission tunnel joint.  I was just glad to carve out a half hour to work on the car.   And the Eastwood fairy came by the house too with a quart of "Metal-to-Metal".   I'm already looking forward to the weekend of the 15th to do more extensive work.   The 15th?  Man that seems a long time away, but if it's like September, it will be here sooner than later.
Posted by deo1929 at 5:08 PM