It's April 1st.   It's also April fool's day.  I wonder if there's a hidden meaning there?

It was 10 years ago that I started this blog.  I fully expected that I'd be driving my fastback by now putting copious miles on it.  Well, that obviously didn't happen.  The other sad part is that as of April 17, this girl has been in my possession for 16 years!   Oh man.

I've missed personal deadline after deadline.  The Mustang was supposed to be on the rotisserie for a year.  6 years later, yes, 6 years, it finally came off.   I can give countless times other planned completion dates for other work has bitten the dust.

Yes, I can give the excuse that for 5 years my work outside the US, especially over summers put a dent in the schedule.  I can blame a number of projects around the house for more delays.  I can point the lazy finger at myself for not getting after it more often instead of watching TV shows of other cars being built.  But the endgame (which I watched last night) is not anywhere near in sight.  And I currently have 3 part-time jobs I'm doing that all together add up to more than a full-time job.  So by the time supper is over, it's 7 PM and I'm tired.  In the next couple of weeks, we're starting a cabin remodel in Michigan which will occupy more of my time away from home.  It seems like it never ends.

I guess I'll be one of these guys that will either take another decade to finish it, or get to a point of just selling it (of which the market is White-Hot for it in it's current condition) and buying a running driving later model Mustang.

But it wouldn't be the same.

So... I am soldering on by having components sent out for restoration.  I figure when I do get to the point after body and paint of putting it all together, I will have things already lined up without needing to wait for restoration or new parts.  So here's the current list of activity...

The T5 transmission is at the shop for evaluation, which isn't looking good.  That's what happens when you buy a used transmission that the guy says, "It's in great shape".  The wrong fluid was put in it as one point and got very hot.  I may just end up using it as a core and buying a new one.  I'll see what the shop says.

The gauge cluster is currently at Auto Instruments in Virginia for the gauge refresh.  I got the quote and they are moving ahead with a nice non-concours restoration with the odo set back to "0" miles. 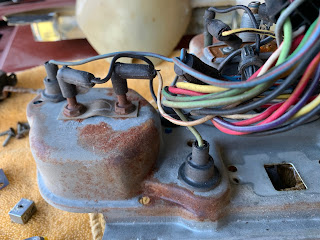 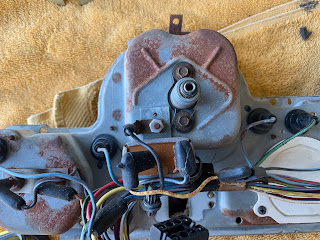 I'm looking at either purchasing a complete AC system or having the original in-dash unit redone.  I'll still need the other under hood components though.  I'm contemplating just buying a complete wiring system even though mine is "OK" but needs a little help.  I may send parts of it off to Midlife Harness Restoration for them to refresh.

I have 90% of the interior components I bought a year ago.  I need to look at the rear axle and decide what needs to be done there beside a bearing and seal refresh in the axles and center section.

There are other parts, such as the radiator, exhaust system, and carburetor to be rebuilt (Holly 600 CFM), but for the most part, I'm probably done until I can get further on the body work and paint.  Yeah, I could farm it out, but I don't have an extra $15,000 sitting around doing nothing.  So it's all on me.

Once I get past a few of my job commitments which I hope will end sooner than later, the fastback will become my new part-time job.  I've come to far with too big of an investment of time and cash to pull the plug on it.

So stay tuned and we'll see what happens.