It's that time of the year when my schedule and activities start getting borderline crazy between home and church.   I'm just catching my breath after the Thanksgiving weekend of cooking (and mighty tasty too, I might add) of smoked turkey, Paella (pronounced "Pie-A-ah") and two stock pots of Jambalya--New Orleans style.   I didn't get to work on the fastback as hoped with family in town.  But  I did get to build a play house for my 3 year old granddaughter out of an HVAC box, that she played in all weekend.   But I digress...

I had a couple of hours on Saturday afternoon to start playing with the "filling the gap" process.  The first thing I did was to get the floor positioned so that it was tight against the inside rocker panel and the best fit possible to the rear edge of the front to rear butt joint.   I used these magnets I've had sitting around that worked well in holding the floor in place. 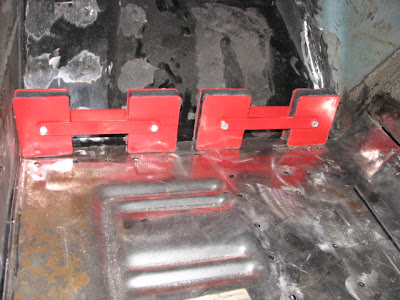 After seeing the nice fit with the magnets pulling the floor and firewall extension together, I thought I'd go ahead and do the plug welds.  Holy Cow!   That was a huge lesson in electromagnetic phenomenon!!!   The welding was anything but good.  Apparently, the magnetic field disrupted the electrical current.  Duh!  Should have thought of that.   Anyway, the floor didn't move at all with the magnets.  I put a few plug welds in the middle of the floor to attache the floor to the frame rail. 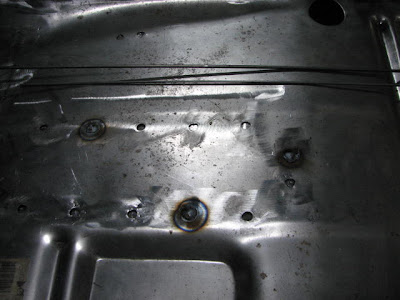 Then I put a couple of plug welds in the floor to rocker panel flange on each end and the middle.  I had what looked like a good gap on the rear butt weld seam with the body clamps fitting tightly and put in a bunch of tack welds. 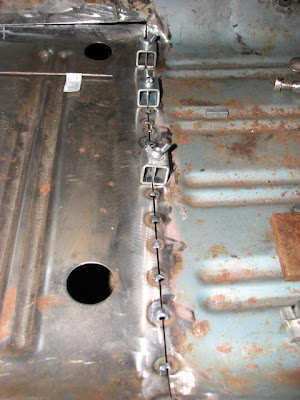 I moved around putting more welds in the rocker panel, the front floor to firewall extension, and the rear butt weld.  I figured I'd deal with the gap at the transmission tunnel last since that's where the biggest problem was.

After hearing from a number of you, I went with the "Glenn method" of using wire to fill the gap.  I got a 1/8" diameter rod at Lowes, but couldn't find anything smaller.  Neither Lowes nor Thrifty Supply had any TIG rods, which would have been 1/16" diameter.   But then I remembered I had a box of insulation support wire left over from building the house.  These are about 17" long and are used to hold up the insulation bats between floor and ceiling joists.

These insulation wires were about the size I needed and ended up fitting almost perfectly in the gap.  I tacked the piece of wire in and then moved down to the other end of the transmission tunnel. 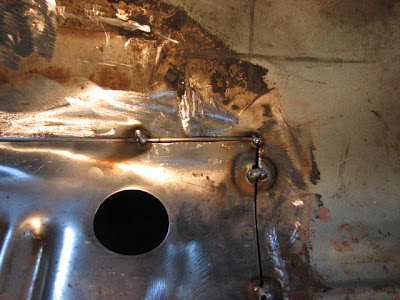 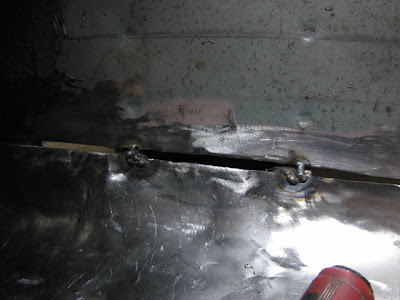 After this I moved down to the middle of the trans tunnel.  Interestingly enough, the gap was almost nonexistent.  I put a couple of tack welds here to hold it in place. 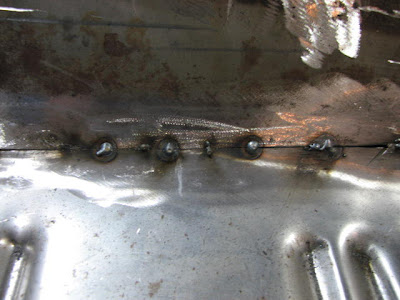 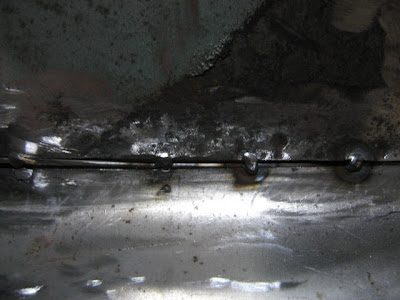 I used the larger 1/8" rod to fill the gap that was immediately to the rear to the transmission crossmember.  One of the things I had to do was to move around and work the butt weld joint to match the changing contour of the transmission tunnel and to keep the heat from warping it.  A judicious blast of compressed air kept things cool. 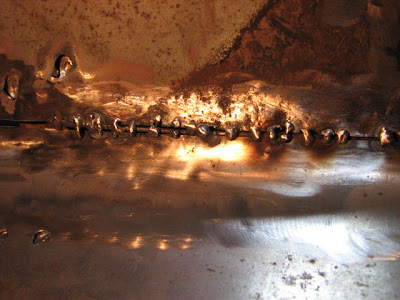 Here's what it is looking like with most of the tack's in from the transmission crossmember to the rear corner of the new floor. 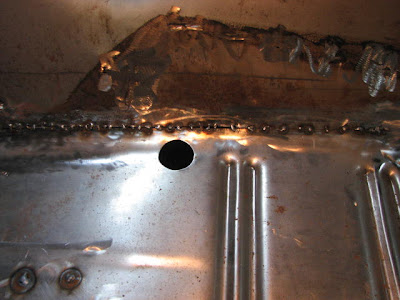 Once I knew I had the floor pretty much tacked in place where it wouldn't move, I decided to finish up the rear corner area to find out how this would eventually look after filling in the spaces between tacks and dressing up the welds. I do have to admit it turned out much better than I would have ever imagined.   I know it's only a floor, but I figure if I can get this to look good, I can make the rust repair in the deck lid and in the corner of the body by the deck lid look as good if not better.

I started to finish the butt joint at the rear of the floor pan, but ran out of time. 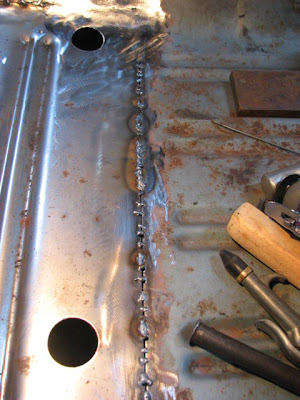 At least the lion's share of the hard work has been done.  I have about half the plug welds to do on the frame rail and the gap to fill and weld between the trans crossmember and the front edge of the floor.  I have probably another couple of hours to finish the welding and dress them up to my satisfaction.   Then I'm ready for the seat riser installation.