Progress has been slow on the fastback.  This winter and early spring has been a busy travel period for me.  The work among the native people of northern Canada this year has doubled over last year.  Add to that my middle daughter just delivered twin girls.  Everyone is doing fine, but the Mustang once again took the back burner.

And now the first trip for the spring and summer season to Canada begins tomorrow with the drive to Sioux Lookout, Ontario.  But before I leave, I needed to pick up the pieces of the garage and try and hang the driver's side door.  This work however began last month.

If you read the last post, it's basically a repeat.  Clean off the goo that attached the vapor barrier to the door.  Then use stripper, rubber gloves, and Scotch Brite pads and 000 steel wool toe get the paint removed.

The factory paint is fairly tough stuff.  It takes 2 or 3 applications of stripper to get it all off which is important for later painting.

One reason it's important to get all the paint off is that the interior skin is textured like a faux vinyl.  Anything left in those tiny cracks and crevices will definitely show up in the final paint.

There was some surface rust and crud that the stripper didn't remove.  I gently used the 3M 2" bristle disc to carefully clean those spots.  Then just to be sure the rust was treated, I used muriatic acid diluted 50% and applied it to dissolve what was left.  It did a good job especially using a Scotch Brite pad to coax the process along.   A thorough cleaning followed with a coating of Pickex-20 sealed the deal. 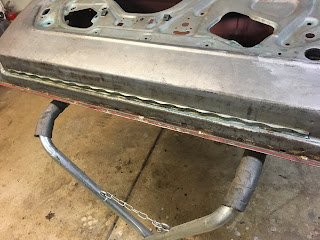 The outside of the door was next.  This round, I used the red 3M velcro abrasive pad on my 4-1/2" angle grinder.  It made quick work and left a nice surface.  An application of Picklex-20 should keep it rust free for awhile. 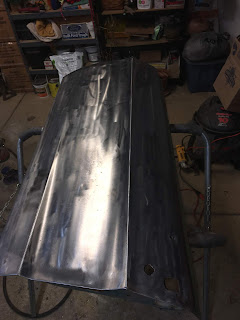 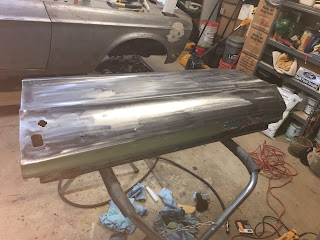 That's as far as I got until Easter weekend.  My oldest daughter and her family came up for Easter.  With the grandkids occupied with doing things with grandma, I borrowed my son-in-law to help with a could of items I couldn't do myself.

After removing the outside door handle, it looked as if it had been forced up which distorted the metal around the opening.  I could fix it using my slide hammer to pull it out but I needed someone to hold the door down while I pulled up.  I used an Allen wrench to straighten out the small hole for the handle. 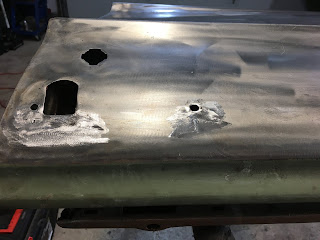 Since I had the help, I had 2 areas of the hood that had dents to pull out.  One in the right front corner which had a pretty deep dent was addressed with 3 rounds of the stud welding gun.  It's much better than before. 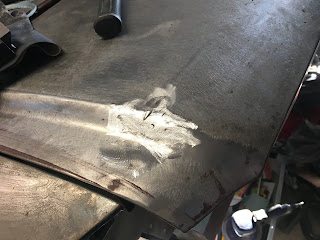 Then there was a spot in the peak of the hood that needed to be pulled out.  The stud gun again was used.  It took 3 passes to get the majority of the dent out.


The clock is running before I leave and I didn't want to leave the driver's side door on the stand.  So last night, I did quick work and ran a tap through the door hinge plates that mount in the A pillar.  With them in place, I installed the hinges loosely. 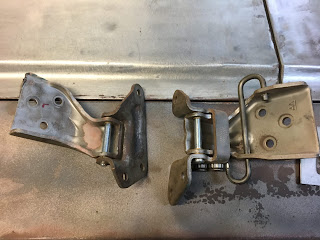 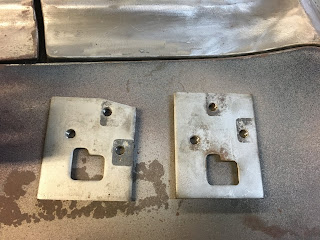 Then came the challenge as it did on the passenger door... installing it with no help in sight.  A step stool and a block of 4" by 4" got the door in relative position.  The top hinge bolts went in OK.  The bottoms were a little bit of a challenge since the both door hinges were loose to and tended to move around.  But I eventually got them all started.  Using wood shims, I got the B pillar gaps close, but it was a struggle to get the bottom gap even close.

Tick-Tock.  Tick-Tock.  The clock is running.  I lightly snugged up the hinges to the A pillar and then used a block of wood and a hammer to persuade them into position.  I loosened the hinges at the door and wrestled with the bottom and B pillar gap.

I had to call it quits and locked everything down as it was.  I put the fender on and saw that I have a bit of work left to do to get the gaps even.  But at least it was together for the first time in literally years.   I'll deal with the fine tuning when I get back in June. 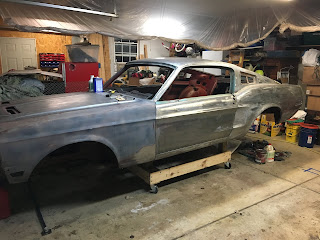 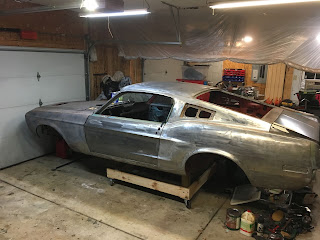 After returning from the north, I'll get Joey to come over and help me with the door.  Then I need to install the front and rear valances.  Then the finish body work will begin... or at least, that's the plan.

So for now, my fastback is in suspended animation until my return. 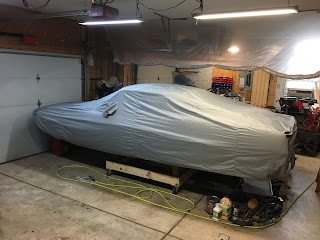 There is a little sidebar ending to this post.  While in the Omaha area in March, my son-in-law took me to see one of his classmates from college.  He just happened to be Andy Leach who is the owner of CAL Automotive Creations.  He build a Ridler award winning 40 Ford coupe called "Checkered Past".  You can check it out here.  He also built a killer 1930 Model A couple that has unbelievable workmanship.  I actually wouldn't mind working for Andy. 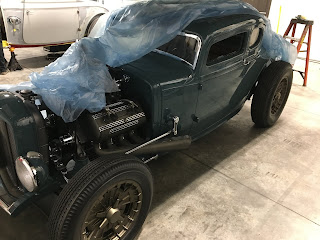