With our current winter weather pattern, my garage space has been rearranged to accommodate my wife's car that we affectionately call "Little Red", a 2010 Ford Fusion SE with 3 pedals on the floor (if you know what I mean).   This keeps me from having to clean off snow, frost, freezing rain, and whatever other combination of winter precipitation that decides to fall from one vehicle (mine) instead of two.  Living in central Indiana, you never know from day-to-day what the weather will be.

Garaging a daily driver however has its drawbacks from a Mustang perspective.  And that is ease of setting up shop to work on it.  The fastback is pushed to one side, support tools such as a workmate, work light, and other miscellaneous items are stored underneath it.  The metal working tools, hand, electric, and air powered, are put away in their respective tool boxes stacked next tot he work bench along with the welder.  Yesterday afternoon, Little Red was relegated to the outside and I set up shop to start tackling the next project on the body--the right rear quarter panel.

In a way, I had already started on it with the repair of the rusted trunk corner and top of the rear quarter in my recent previous posts in December.   I knew I had a small area of rust in the lower section of the quarter to fix.  I also had some major damage to it as well to repair.   I decided to tackle the metal bumping and shaping first.   Part of the reasoning for doing the dent repairs was that I didn't want to invest my time in fixing the rust only to find that I couldn't get the quarter panel back into shape and end up replacing it anyway.  The progress here and following will determine that decision.

I didn't have a really good "before" picture as I've been somewhat working on this panel off and on over the time I've had the fastback.   According to the previous owner, the guy before him stored the Mustang outside next to his barn.  Why not inside?  Who knows.  The story goes that a couple of cows got loose and in the scuffle ran into the rear quarter panel.  Funny though...I didn't find any Guernsey or Hefer cow marks on it. :-)     This is the best picture of how the panel looked upon arrival at my house. 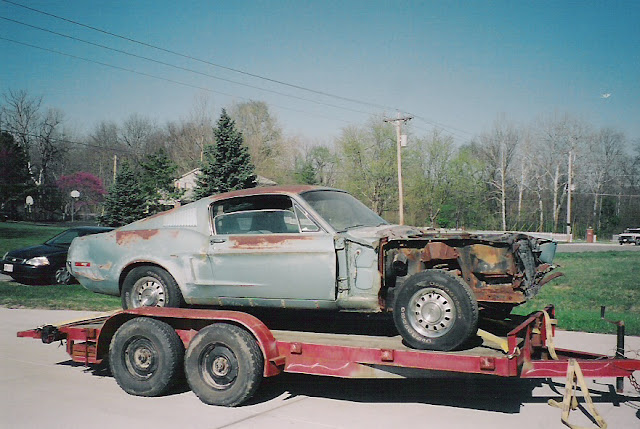 The first order of business was to strip the paint and surface rust off of the rear quarter panel.   I did snag one of the 6" nylon cone brushes for my large grinder on Amazon, thanks to Sven's link here.   I got it on Thursday and was anxious to see how it would work. 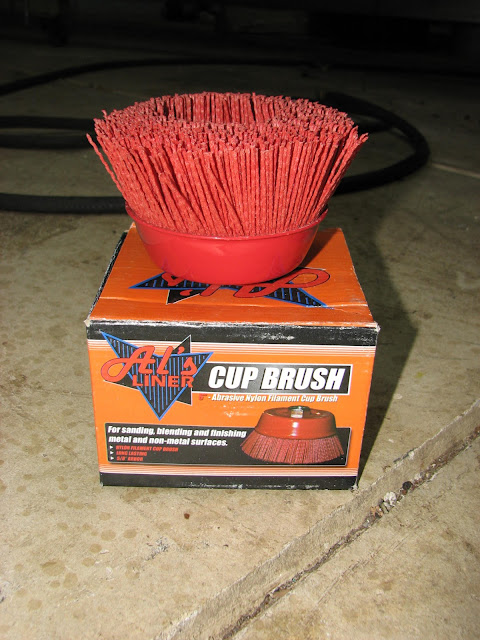 This is what I started with as far as paint and surface rust on the lower half of the quarter panel.  I had already from before used a wood buck to push out as much of the larger dent as possible. 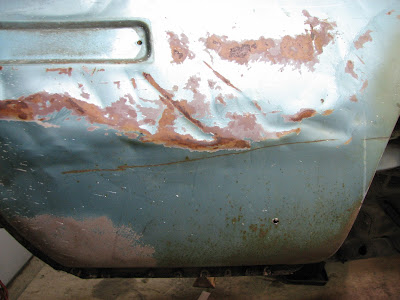 The nylon cone brush did a great job of ruffing up the surface but wasn't aggressive enough to take the paint off with any speed.  In all fairness however, the nylon brush will be helpful on the inside of the body to prepare it for rust inhibitor and primer.  It's really designed to rough up pick up truck beds before bed liner application.  So I got out one of the stripping pads I bought from Eastwood a while back and used my 4-1/2" grinder to strip the panel.


After about 20 minuted of work, I had the rear half of the quarter panel stripped to bare metal.


From the reflection of the metal surface, there are obvious waves, creases, and dents that will need to be massaged out of the panel.   I used my wooden buck that I made from a 2"x4" back when I was working on the driver's side floor to help form the radius to the transmission tunnel.  I started at the top of the dent and walked the buck downward while hitting the end with my hammer.   It worked well but still left some of the hard to reach and more sharply and deeply  dented places behind.   I used my collection of body dollies and hammers to work out the bigger stuff.   Where I couldn't get behind the panel easily, I used my stud weld gun to pull the dents out. 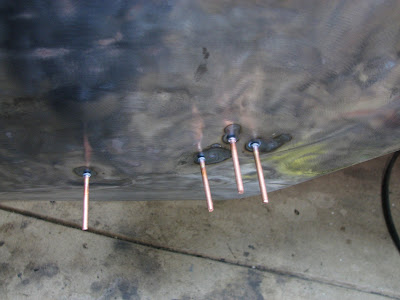 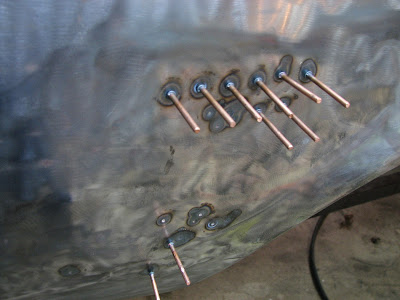 This worked "OK" but for some reason, the studs did not all cooperate.  About 1 out of 4 broke loose from the body while either putting the slide hammer on the stud or after just 1 or 2 hits.  I'm not sure if it's a stud, gun tip, or power problem with the gun.  But I was definitely not getting the penetration needed.  The internal gun breaker was also tripping if I held the trigger longer than 4 seconds.  The other problem was with a couple of the studs pulling the panel out but then breaking off leaving a nice 1/16" pin hole to repair later.  That should be no problem with the practice I've had, right?  (LOL!).   After the stud welding faux pas (i.e. blunder) I reverted back to the hammers and dollies.   I did make progress, but it's slow going getting it back into shape.


Time was starting to run out, especially with a large stock pot of Kentucky "Burgoo" on the stove simmering away to be consumed during the Superbowl.   If you've never heard of Burgoo, you can read more about it here.  If you're interested in making it, there's a recipe on Food.com here that you can use.  I have my own recipe that emulates more of the Owensboro / western Kentucky style.  But I digress....

I wanted to protect the bare metal and also get a read on how much of the dent and straightening process was going.   I could feel and see only so much especially with the bare metal and all the stripper and cone brush marks.   I shut down the torpedo heater and let it cool down.  I got out some etching primer and laid down a dust coat followed by 2 full coats.   I took these pictures before the primer had totally dried.   I didn't want to start the torpedo heater up with all the paint fume as that could really spoil a person's day with a flash fire.  After paint application some of the dimples from the stud welding are still visible, but the depth of the dents has been reduced quite a bit on this upper right quadrant of the panel. 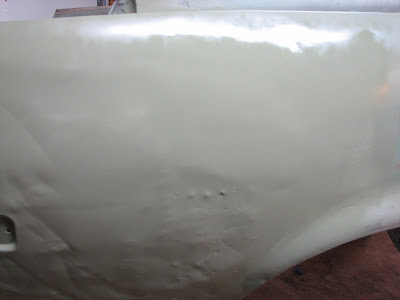 The bottom left half of the quarter however is where it really looks ugly.  This is going to take a heap of time and patience to get the contours close enough since I don't want to have more than .030 thickness of body filler in any one place if even that much. 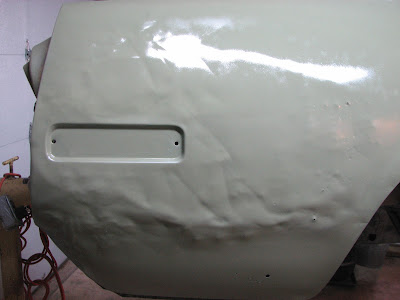 I have a couple of methods I'm going to use to work the metal particularly in the lower part.  One I've tried with good success.  The other I've dabbled in but will see how well it works.   Like I said before, the worse that could happen is that I cut this panel out and replace it with a repo part.  But I'm going to do my best to keep as much of the original sheet metal on the body as possible.

Until the next installment, it's off to get some burgoo and watch some football.
Posted by deo1929 at 10:05 AM