Time flies when you're having fun.  For me, it was more literally than figuratively.  In the course of 8 days, I was on 8 flights, traveled some 4,500 miles by air, crossed the US/Canada border twice, and saw a temperature swing of 78 degrees Fahrenheit.  A bonus of the trip was on my leg flying at 25,000 feet from Sachigo Lake, Ontario back to Winnipeg.   I got to see the Northern Lights for the first time.  It's quite a spectacle of nature.  But it is good to be home...at least for a couple of weeks until the next venture "up north."

So after a day of recovery it was time to continue where I left off on the fastback in prepping the body for primer and bodywork.  The one advantage of this step in the restoration process is that there isn't a lot of set-up or tear-down of equipment such as the MIG welder, hammers, dollies, air tools, etc.. It's basically a couple of tools with a couple of different abrasives.  Oh... And a LOT of labor.

The first thing in the process was to drop the plastic sheets that make the walls for my Dexter "Kill Room" as my daughters like to call my dust containment system in the garage.  The second half of the roof went reasonably well except that I discovered a slight crease and indentation about a foot back from the windshield.


There are a couple of barely detectable dents over the driver's side door.   I'll have to deal with them all eventually.  I'm hoping my arsenal of slapping tools and files will get most of it out.  I'm not a fan of smearing a lot of body filler on the roof to make up for poor metalwork.  Less is always better.  I'm not looking forward to more metal massaging and it's a little disappointing but it is what it is.


I applied the PickelX-20 on the rest of the roof.  I then moved on to the driver's side cowl.  This will be more tedious as I'll have to hand-clean the vent grates.  That's why I bought that box of red Scotch Brite pads for occasions like this. 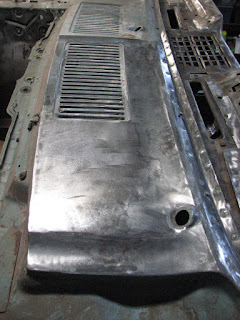 The next area that I need to work on before removing the body from the rotisserie is to get the rest of the interior surfaces cleaned, apply with fresh seam sealer, and painted in Zero Rust.   I figured I would start on the cowl and dash, including the underside which will be easier to get to on the rotisserie than on a body cart.  However, before I started cleaning up  the dash, I needed to document some of the hardware that I hadn't removed, or I took out and ran the screws or nuts back in place.


Once I got all the nuts n' bolt n' screws removed, I started the metal cleaning.  I switched over to "surface conditioning" pads and away from the 40 grit sanding disc.  It does a fairly good job of cleaning the paint and light surface rust and will not remove or damage the metal.


I was able to get about 80% of the dash cleaned up.  There are some nooks and crannies that are left along with the bottom edge.  I'm waiting for my 3M Scotch Brite 2" Roloc 50 grit bristle brushes to arrive.  I've never used these before but hoping that they will do a good job of cleaning those contour areas that are hard to reach.  I might even try them on the cowl vents.

I'm figuring I have less than an hour of external dash work left.  Then it's on to the underside which will be a challenge as there isn't much working space under there.  It's times like this I wish this was a Mopar as several of them had removable dashboards making work on them duck soup.

I'm hoping to get some more work done in the evenings this week before my wife and I head to west Iowa to visit my middle daughter and her family.  We haven't been out there since, as one of my friends said, "the last tile project" which is true.  So It's our turn in the barrel to travel west.  My travels won't end there as I'll be home for 4 days and then hit the road for Red Sucker Lake, Manitoba to conduct another family and parent workshop in that First Nation community.  Long underwear is NOT optional there!  Then I'll be home for a week before I hit the road to northwest Michigan to open the family cabin.  I'll be back for a week and then off on a round-robin trip to LA and Edmonton, Alberta before heading home.   I'm tired just thinking about it.  And then people wonder why I'm not making such great progress on Eleanor.   So there you go.