A Diversion from Hammers and Dollies

This last weekend in January was the first weekend I have been home this year.  Yeah.  2018 is starting off that way.  But it's for a good cause with a couple of trips to northern Manitoba communities to support and encourage the children and staff at schools who have had a challenging school year.  With a weekend at home, it was time to get some R&R in and maybe some spare time to get back working on my fastback.

When you have a restoration project that is so expansive and involved with so many areas to work on, it can be rather daunting to figure out what to work on and in what order.  But it can also provide a break from one task to work on another.  That's what I decided to do this past Sunday afternoon.  I had started on the cowl cleaning some time ago (before diverting to the roof) and decided to just finish the task.  Beside, it requires very little brain power or muscle.  So this post is relatively short and more of a "before" and "after" documentation.

I got out my tools of choice with included my 4-1/2" electric angle grinder and 2" air angle sander.  The attachments included two different braided straight wire brushes, a box of 2" conditioning pads, and a 2" and 4-1/2"  3M brand medium grit "bristle brush" 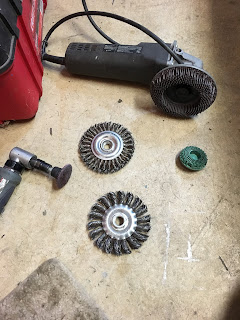 This is my first time using the larger 4-1/2" brush.  I discovered that, like the smaller 2" brush, it works great on surfaces that do not have any lips or overlaps.  Otherwise, those edges tend to break off the bristles in little bits that fly all over the place including hitting your hands and body if the tool is pointed in the wrong direction.  Gloves and face shield are a must to wear.   Beside that issue, however, the bristle brushes last much longer than the reconditioning pads.  Their size and shape does limit access in tight spaces but I would give them a "thumbs up" if you're thinking about using them.  Just be forewarned about where and how to use them, especially since they aren't exactly cheap.


I  rotated the body to get in a comfortable and accessible position.  I had removed some of the surface patina before, but not all.  It was time to just get it all done and over with.


Starting on the passenger side, the large bristle brush cleaned off the top of the cowl and part of the side.  What I couldn't get to with that, I used the 2" bristle brush.  There were still some areas that were difficult to get to such as the inside corners.  That is where the 2" conditioning pads came into play.

The other areas that needed prepping were all the joints covered with seam sealer.  The bristle brushes tore through it fairly well until you got down to the seam itself where it was either sandwiched or overlapped.  Then the bristle brushes started snagging and throwing off pieces of the brush.   Reverting to the 4-1/2" grinder and the heavier braided wire brush, I continued the seam sealer removal.  This was somewhat of a tough decision as I though about keeping as much as possible for a "factory" look.  But after seeing part of the sealer lift during removal, and then pulling if off by hand (which means it wasn't stuck to the metal) I could see surface rust under it.  It all had to come off to make sure there was no hidden rust to come back later.  It was quite messy with small bits of sealer all over, but the metal was clean.  The finer braided brush got into the spots the heavy one could not hit.  The 2" conditioning pad finished off the sealer in the sandwiched joints along with the tedious job of cleaning the paint and patina off the edges of the fins on fresh air grill on top of the cowl.

After 2-1/2 hours, the job is 98% done.  There are some very tight areas left that I can get with the red Scotchbrite pads.  I need to put a coating of Pickle-X 20 on it to preserve the now bare naked metal.  Then the new seam sealer will be applied and that section will be ready for bodywork and paint.  Yeah, I did find some small dents that will need to be addressed, but it's nothing too deep or serious. 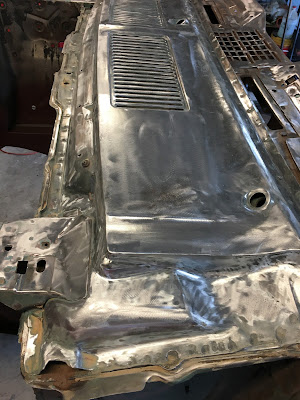 Now that the outside is done, I need to do the inside of the cowl and dash which will be a real pain from an accessibility standpoint.  Then it will be ready for a coat of Zero-Rust on the inside.

So that's it.  Nothing glamorous or flashy (except shiny metal!) for this post.  I'm off to Northern Ontario for a week to teach about 30 aboriginal church Pastors how to do Family and Parenting classes back in their home communities.  Then I hope to be home for at least two or three weeks before the next trip.  I might even get to squeeze more time in on the fastback.