What is it about car guys (and gals) that makes us do what we do when it comes to acquiring and restoring a particular vehicle?   Maybe it's because as a kid we saw "the car" and always wanted to have one.  I know when I was looking to buy my first car in high school, I was stuck on Mustangs.  I had found a '66 coupe with a 6 cylinder and 3 speed on the floor.  But my dad wasn't a fan of me getting it because it had a lot of miles on it (95K if memory serves).  The guy selling it was a mechanic at a Standard gas station  (we're talking 1971 now).   So I ended up with a '66 Fairlane, 2 door hardtop, 289 V8 and "3 on the tree".   I always wanted a Mustang, and a fastback, since then.  That may explain the one sitting in my garage.

But there was another car close to my heart.  I was even younger (3rd grade) when my aunt, uncle, and brother started to get into Model A Fords.   At one point in time, the 3 of them owned 6!   My favorite was my aunt's 1929 roadster.  It was professionally restored and a drop-dead gorgeous car.  It won best of class at every show she took it to.  There was something about the shape of the radiator shell... the way the hood and cowl was formed.   The body reveal was wider than the 30-31 years.

Fast forward to my adult life.  A friend of mine had a 41 Chevy truck he chopped the top on and I did the body work on the cab afterwards.  He got me into hot rods.  Then we attended our first street rod nationals and I was hooked.  A few months later, he calls me (knowing I wanted a '29 Model A) and said there was one for sale up where he lived.  It was a Tudor (2 door) sedan which was perfect with my family of 5.   To make a long story shorter, I bought it and trailered it home.  Over the next 3 years, I built my first hot rod.  Even though the interior wasn't finished,  the outside was.  In the summers, we'd all pile in the "A" and head to the Parkette Drive-In in Lexington, Kentucky for malted shakes on Friday evening with all the other hot rodders.   It was a blast while we had it. 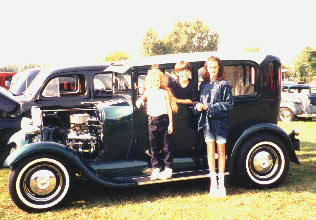 But then someone came along and wanted to buy it.  After offering to trade me 2 vehicles... and then 1 vehicle and cash, he finally asked how much I'd take.   I gave him a high-ball number expecting that that would be the end of the conversation.  Five days later, he calls and says, "I have a cashier's check for the car.  When can I come get it?"   Well, if he was willing to pay that price, he could have it.  I got way more than I had into it (not counting my time).  But the cash paid off my van, funded my private pilot licence, and the first year of health insurance when I went to seminary.

I've always missed that car and thought that one day, I could do it all over again.

Well, again happened in September.  I would occasionally do an eBay search for 29 A.  Low and behold, one showed up for what my wife and I though was a pretty cheap starting bid.  I watched it go through 2 auction cycles with no bids.  We didn't know if there was a reserve.  On the 3rd cycle, we decided to place the opening bid.  There was no reserve.  So we were in provided no one else bid on it.   I have put in an auto-bid that would add $100 is someone else bid.   6 days went by with no other bids.  Then someone dropped a bid $50 higher than mine.  The auto bid raised it another $50.  On the last day, I expected that someone would jump in at the last moment and snag it.  We felt, if they did, then that's fine.  If not, that would be fine too.  No one else bid and I won the auction.  Now the issue was getting to northwest Minnesota in the middle of nowhere to get it.  With a U-Haul auto transport in tow, and a friend along, we make a quick up and back trip from Indy to get it.

With the large "rat rod" movement, I could probably do very little to it, update the chassis and have it on the road inside of a year.  But the other voice in the household spoke up.  "Finish the Mustang first."   So that's what I'm going to do.  Besides, I didn't have any room in my garage to work on 2 cars at the same time.

Another friend has a large machine shed that I can store it in.  I'm working on getting the Indiana title for it (which is a royal pain in the you-know-where).   Another friend has a trailer.  So hopefully by Thanksgiving, it will be in it's temporary digs.


Progress will then continue on the fastback after that.  Hopefully the next post will have some progress on it.