You have probably heard the expression, "2 steps forward, 1 step backwards."  In my case it's more like 2 steps forward and 3 steps backwards.  Hence the title of this blog.

It seems that since my last post, there must have been an issue with the Picklex-20 adhering to the surface of the inside of the doors, the A and B pillars and the top of the rocker panels.  After returning home from my almost 3 weeks away, those areas were covered in flash rust, and in some areas, it was pretty extensive. 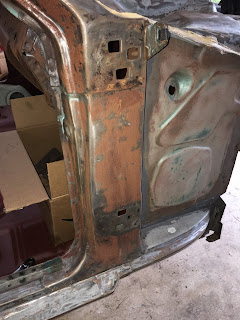 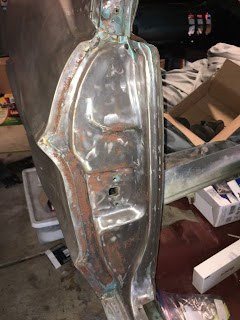 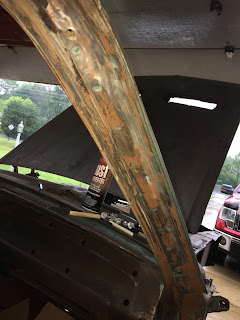 The door hinges were completely covered with rust.  That may have been my fault as I didn't remember coating them with Picklex-20, but I'm pretty sure I did.   I put them in the blast cabinet and glass bead blasted them (again).  Then I sprayed them with Eastwood Rust Converter. 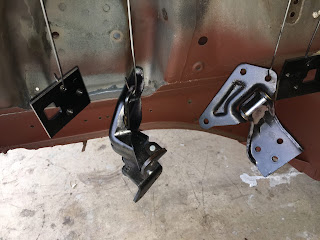 I redid all the work I had done before on the A and B pillars, the top of the rocker panels, and the inside of the windshield posts on both sides. 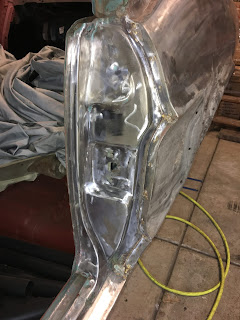 I sprayed the A pillars with the Rust Converter where the hinges would be covering up the metal on the pillar. 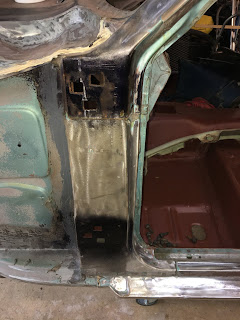 I reattached the hinges on both sides and then moved on to getting the doors cleaned up again. 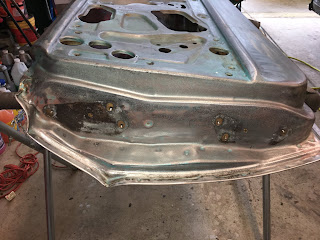 The hood even had some spots that needed to be recleaned and treated. 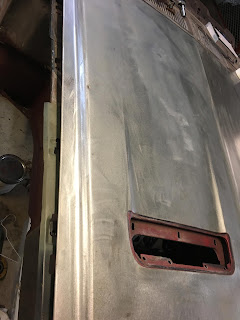 The tops of the fenders has spots as well.  I believe the problem was the car cover was not entirely waterproof, and with all the rain we had, a combination of high humidity and the car cover getting wet and holding the moisture, contributed to the flash rust. 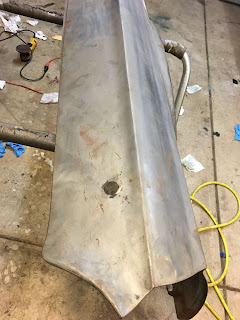 After cleaning all the metal surfaces on the body, doors, hood, and fenders for the second time, I used wax and grease remover to make sure any contaminants left by any of the conditioning discs were gone.  When I applied the Picklex-20, I noticed that it did not "bead up" like it has before.  I left it on for two times the normal amount of time.  It seemed to work better.  After the wipe down, the slight milky appearance of the treated surfaces returned.

I put the doors and fenders back on the body to keep them out of harms way.  I'll have to do my gapping of the body panels after I return from Canada the end of August as I just ran out of time before leaving.

I also decided to not put the car cover back on and turn the body around with the rear of the car next to the garage door.  The EDP coating on the NOS trunk lid should keep it protected in case the garage door drips on it.  I'm also leaving my 24" diameter fan running to keep the air circulating around the body.

So now I'm back to where I started again for the 2nd time.  Hopefully it will be okay for the next 8 weeks.  If not, well...3rd time is the charm, right? 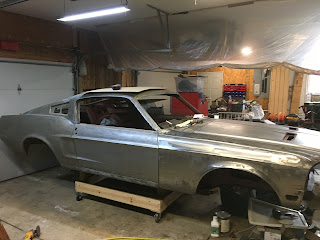