Finally, the temperatures here in central Indiana have moderated some.  41 days without rain...19 days in a row with a high at or above 90F graciously came to an end this last week.  So I planned to get back on the Mustang, but then some much needed deck repair intervened and took 3 full days out of my schedule.   There is more deck work left to do, but then the severe storm that came through Saturday night took out my neighbor's 80' Ash tree and then went on to collapse the stage structure at the Indian State Fair that took the lives of 5 people and injured 45.  Such a tragic event.  Anyway...the rain was hit and miss on Sunday afternoon as the cold front moved through.  So no deck work since water and electric cords don't go well together.

With the deck rain delay, I started working towards getting this front floor repair to the firewall moving along again.   I needed to clean up the frame rail and treat it for corrosion protection.  I cleaned the area with a wire brush and Scotchbrite  pad.  Then I sprayed it with Eastwood's "Rust Converter."  As it dries, it turns the surface black and is a prep for finished paint if desired.  It takes 2 coats and 48 hours for it all to cure.  So that meant I'd be limited on how much I could get done on the car.  Bummer.


I turned my attention to the floor extension panel.  I got out my "Weld and Sealant manual" and looked at where the welds were originally.   There are no specific measurements in this manual, but it does show the relative location, type, and number of welds.   So approximating the location, I marked the replacement panel with the welding chalk... 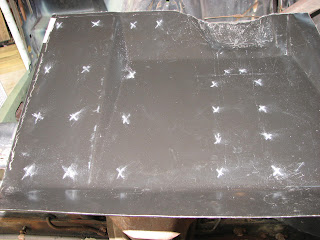 The above picture is the side that will be facing the passenger compartment.  I did mark the outline of the frame rail on the opposite side to be sure that my punch marks for drilling would be in the correct place.   After center punching all the "X"s,  I used a 5/16" drill in my drill press to get to as many of the punch marks as possible.  The throat of the drill press isn't deep enough to get to any of the interior marks.  I switched over to my DeWalt drill and with a 2X8 inch wood backup drilled out the rest of the holes.   I cleaned up the burrs on both side and ground away the EDP coating so the plug welds will stick... 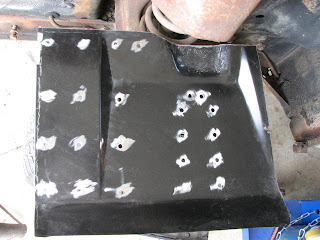 When the Rust Converter finishes curing which should be Tuesday, I'll shoot it with some Rustoleum black.  After that dries, I'll be ready to get this bad boy installed.  I'll have a small patch to fabricate on the firewall between this piece and the steering wheel patch I put in previously.   Then it's on to the front floor pan and seat riser installation.  But that may be awhile with my upcoming schedule.

Let's see...my second grandchild is having her 1 year old birthday party this Saturday.  My daughter and Son-in-law return from the West Indies after almost a year and a half there at Ross University Med School.  Then I get to pack a U-haul truck with all their stuff I've had in storage and send them off to their next stop in Medical training at Saginaw, Michigan.  The last of the deck wood replacement will be squeezed in.   Oh...and there's my wedding anniversary in there too.   Granted, I love to work on the Mustang, but family comes first, even at the expense of "the other woman" in the household--er' garage.   But that's OK.  I keep telling myself, "Even if progress is slow, it's still progress."