Driver's Side Floor Repair...Slowly getting there

It's been awhile since I've been able to carve out some time to work on the fastback.   From my last post, it's obvious that life often interrupts plans and priorities end up shifting.   I'm sure you can relate.  Well...on with the latest effort.

As the last exciting episode of this part of the project, I used the Eastwood Rust Converter to coat the inside of the frame rail and the top of the torque box that the lower part of the firewall / floor extension attaches to.  It was not drying as advertised.  Believe it or not, I put a box fan in the car after 3 days of waiting for this stuff to dry.  It took another 2 days with the fan running on high for 24/7.   I don't know what the deal was...if I didn't wait long enough between coats or put it on too heavy, but I'll definitely have to either use it with some degree of restraint, or live with the fan drying technique in the future.   After it finally dried, I figured I would just shoot some black Rustoleum on over the rust converter for extra protection.   It may not be the fanciest of coatings, but it's more than it came with from the factory which was....none.

I took the extension panel and did another test fit... 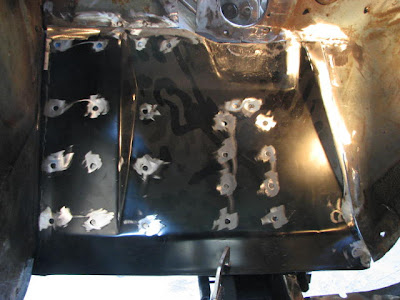 I had to do some light grinding on the right side to get it to fit the drive shaft tunnel a little better.   The edges were sanded to remove the EDP coating to get a nice clean bare metal surface for welding.   I used a pencil to mark all of the hole for the plug welds on the torque box and frame rail.    The panel was removed again and the paint was removed with my 2" grinder with a 24 grit pad where the pencil marks were.  I fit the panel back in place...again....(must have been a dozen times by now) and clamped into position.   I did have to "persuade" it with my body hammer to get it flush in some places.   Then the fun began by plug welding all the holes.

This may not sound difficult, but it was the position I was in to do it.  The frame rail was poking in my gut while I leaned over as far as I could with my head under the dash...with a welding helmet on.   The out of position welding didn't produce the prettiest rosette welds, but hey...that's what a 4" grinder is for, right?   (It was about half-way through the plug welds that my wonderful wife got home from work, walked into the garage and said, "Are you having fun?")  Huuump...   Anyway...back to the welds.

Since this part is a structural member, I'm more concerned about strength than beauty on this part of the reconstruction.   I worked in a criss-cross pattern to get the 4 corners attached.   Then I worked in the same pattern starting in the center of the part so that I wasn't putting too much heat into the part.   The last part of the process involved putting some small tacks on the seams at the top and right side where it joins the firewall and drive shaft tunnel respectively.


I still need to finish up the seam welds, tweak the steering column patch, and fabricate a small patch in the firewall to the left of the steering column hole.    It was getting late, I was hungry, and it had been a long day.  But I'm getting closer to starting on the front floor pan installation, which should be fairly easy compared to this unexpected project.

Oh...BTW...I inadvertently left my work light on when I was done which happened to be on the floor under the right side of the car.  I didn't notice it since it was still light outside.   I closed the garage door, went inside to eat and do some other things.  I went back into the garage for something else after dark.  I opened the door and in the pitch black garage, I noticed the light was on.  I walked over to the driver's side to reach through the "Flintstone" floor to pull the light out to turn it off.   Then lo and behold...I saw a couple of pinholes in the passenger side extension panel the light was shining through!  Bugger!  I did do some probing and it's nowhere near as bad as the driver's side, but I will have to put at lease one patch in it.

I think I'll wait to do that after I get the body on the rotisserie...which may be awhile.  After all, it's Labor Day weekend coming up and the house needs to be painted.  If I'm fortunate, my wife and I should be able to get it done by Monday if the weather holds out.

And people wonder why it's taking me so long to finish the car.  LOL!