This weekend I was able to spend a couple of hours on the fastback in spite of complications such as my wife coming down with the stomach flu that's been going around and some extra meetings related to my occupation that consumed half of Saturday and Sunday afternoon. I have come to the place where I'm not picky and will take any time I can spend on "Mustang therapy".

After getting the driver's side floor installed, the garage looked like a war zone...black grinding dust everywhere...tools and consumables spread across the floor and in the car.  So with Saturday afternoon warming up into the 40's with bright sun and a hefty breeze out of the west, I aired up the tires, jacked the car up and removed the dollies, and rolled her out into the driveway.  It's the first time it's been out of the garage for probably a year.

With my girl in the driveway, I proceeded to pick up and clean up and organize the garage as best I could with all the stuff I have in it.   But some of it will soon be moving to my new larger storage unit I'm upgrading to so I can put all the car suspension and tires in it along with the passenger door.   Now I at least have a clean space to put the Stang in. 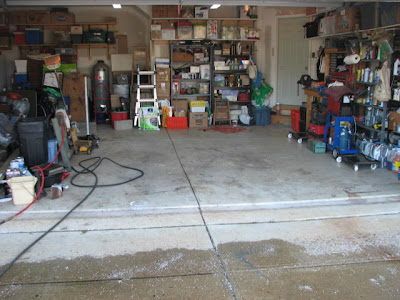 I put an extension on my air hose so it would reach out to the Mustang.   Then I proceeded to blow out all the dust and debris so that I would have a fairly clean platform to work on.  With the sunlight, it also allowed me to evaluate the work done so far...and evaluate some of the work left to do. 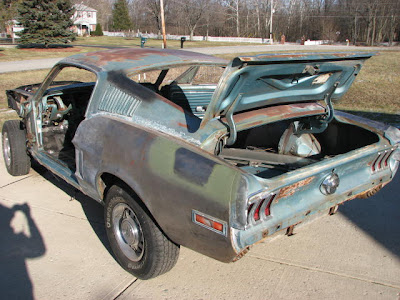 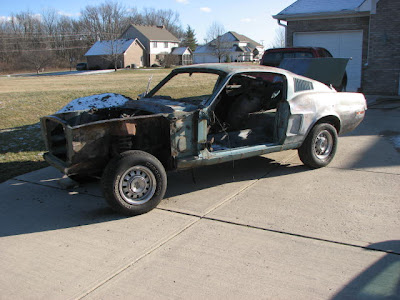 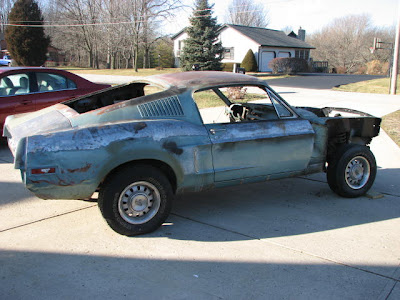 If you want to see traffic slow down dramatically, just push your Mustang out into the driveway. 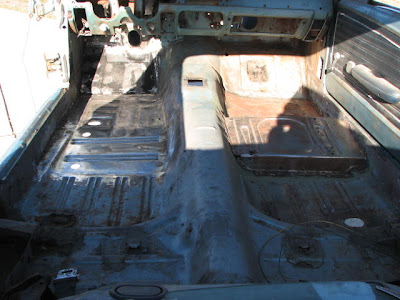 This is a shot through the back window at the floors.  They look pretty good under brighter light outside. 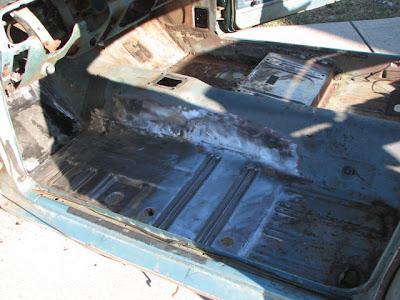 The recent floor replacement looks OK.  I suppose I could spend some more time to get a better metal finish, but I want to expend that energy under the car since that is the side that will be more visible, especially if I get stupid and decide to put display mirrors under the car. 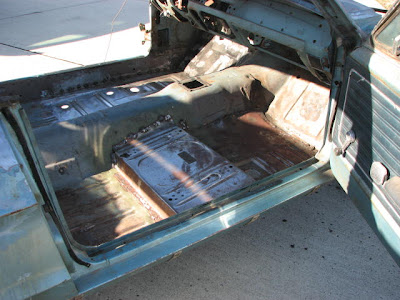 I should get the passenger floor cleaned up like the driver's side.  It would look much better...at least until I get epoxy primer on it. Here's what I wanted to see better...the rust in the upper toe board and lower firewall.   You can see the rust perforation just above the dash shadow line in the middle of the floor. 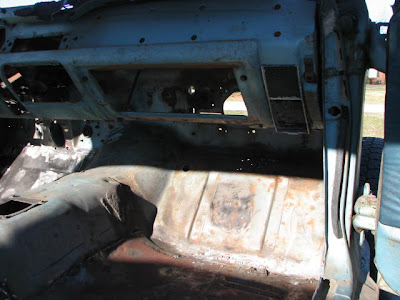 Here's the view of the rust perforation from the outside passenger side front wheel well area... 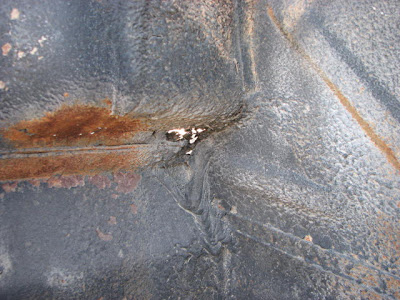 Here's the view of the rust perforation from the passenger side engine compartment area. 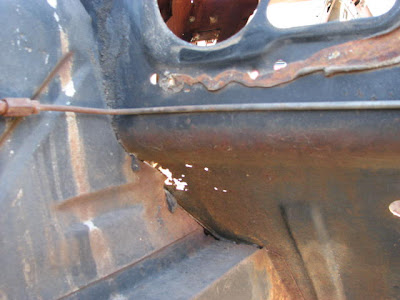 This will be an interesting repair since it involves the frame rail and rear fender splash apron joints.  I didn't see any other rust perforation.  It was just a layer of surface rust, which is a good thing.

After blowing the crud out of the car, I rolled it back into the now clean garage.  I used my trusty 6 ton floor jack to position the car so I can put the front and rear rotisserie pieces on it.   I put my jack-stands under it at their maximum height and pulled the tires.   So now I'm ready to start the suspension removal. 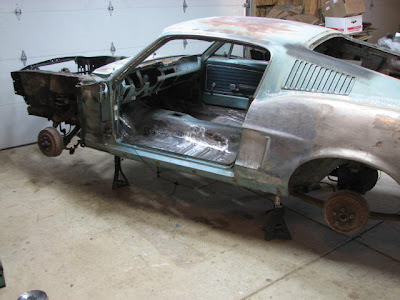 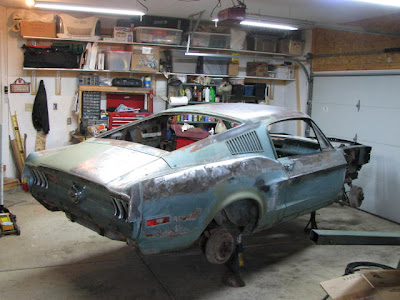 With a can of "PB Blaster" I sprayed all the nuts and bolt on the front suspension.  I called it quits since it was near dinner time and I wanted to catch a little bit of the Mecum Auction from Kissimmee, Florida.  Man, there was what I call "stupid money" paid for cars.  Amazing that some people have that kind of disposable income to drop $610K on a 1969 L-88 Corvette convertible.  Granted, all three previous owners were there and it was all original, and it had only 21K miles, and all the paperwork.  But still, that's a chunk of change.  Anyway...I went out a couple more times in the evening to spray the suspension down in preparation for removal.

Fast forward to late Sunday afternoon.  I fired up my heater, sprayed down the suspension again, and elected to start on the suspension by removing the left front springs.  The shock tower brace, shock, and cap came off without a hitch.   I started on the spring removal and ran into problems with the internal spring compressor I previously purchased.   The shaft was too long and would hit the spring perch before compressing the spring enough to remove it.  I had another set of outside spring compressors, but these wouldn't get enough of a "bite" on the spring coils... 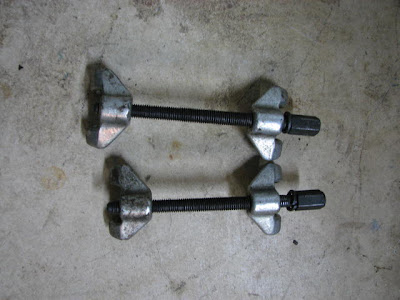 I went back to the internal compressor and decided to cut the shaft down.  I measured the distance of the spring top to bottom.  Then I transferred that measurement to the spring compressor "hooks" in their extended position to determine how much of the shaft I had to cut off.   Here is what it looked like after the shaft cut. 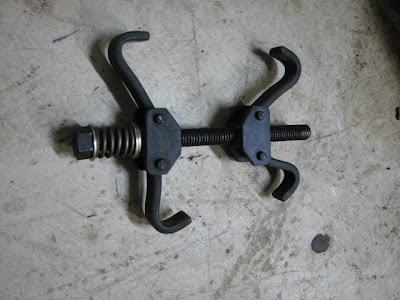 I was able to get the spring compressed and out of the car.  I know some of you might be thinking, "Why not just torch it out?  It's fast and simple."   Problem is, my friend who has the torch is out of town on vacation.  So I had to resort to mechanical removal.   Here's the left front suspension with the spring out. 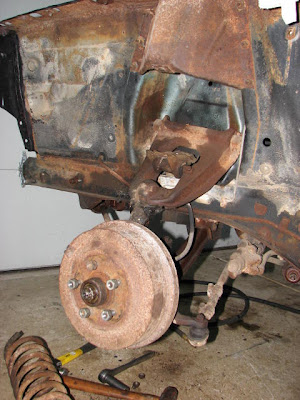 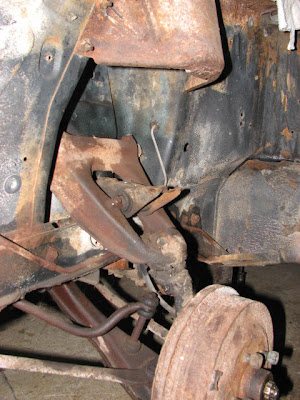 I started removing cotter pins, most of them that broke off from rust.  I did get the bolts loosened for the strut rod studs at the lower control arm and the lower control arm bolt and eccentric out.  I need to get some deep well air tool sockets to get some of the other bolts freed up.  I stopped by Lowes this morning on the way to work.  They have a complete set, but it's almost $60.  I only need a few of them.  So I'm going to purchase them individually.

My next window of opportunity to work on suspension removal is tomorrow evening, but that is dependent upon my wife's crazy schedule, since she's been going to the capital to help get a piece of education legislation through before the end of the congressional session in March.  And then you have the possibility of a last-minute meeting since I'm pretty much on call 24/7.

I am just glad that I'm moving closer to getting the fastback on the rotisserie.  Then I can get the underside done and get the car back on all "fours" with new suspension.  I don't think I'm going to mess with trying to clean and rebuild what I have--at least that's how I leaning right now.  Besides, I want the newer style bushings and not original rubber.  I'll make the final decision after I get all the pieces parts out and evaluate them.