This has been a full weekend in more ways than one.   All Friday evening and about 12 hours on Saturday were consumed with our youth group's annual Valentine's Day Dinner, one of their largest fundraisers of the year.  My part was preparing about 2 gallons of Shrimp and Sausage Gumbo, 5 cheese cakes, and about 40 chocolate ice cream stuffed crepes with a crew of 4 teens.  My wife did the meat and veggie Lasagna and Chicken Alfredo along with the set up of the church kitchen and dining area.   It all came off without a hitch and the kids grossed over $750 for the night.   Getting to bed dog dead tired at 11 PM on Saturday night has left me dragging.   But the Mustang show must go on.   Sunday afternoon would have to suffice.

I stopped by Lowes (big surprise, eh?)  on my way home Sunday afternoon to pick up a couple of DeWalt metal cutting wheels for my 4.5" grinder.  Unfortunately, the arbor and chuck design were not compatible on my grinder since it's an old Craftsman.  The disc would either not have enough contact with the arbor and spin, or if I used the backing plate, it would distort it.   Not good to have it come apart at 12,000 RPM.   I did some backyard engineering and found that 2 grade 8 washers stacked on each side of the cutting disc simulated the DeWalt grinder arbor with fairly good success.   So my "wheel of death" was ready to start surgery on the rear leaf springs.

I then proceeded to work on the left front spring perch bolt.   Due to space limitations, I was able to only cut through about 3/4 of the way.   One smack with my sledge hammer knocked the end off and then with a drift and hammer, I drove out the bolt.   Driver's side leaf spring is now out.   Yay. 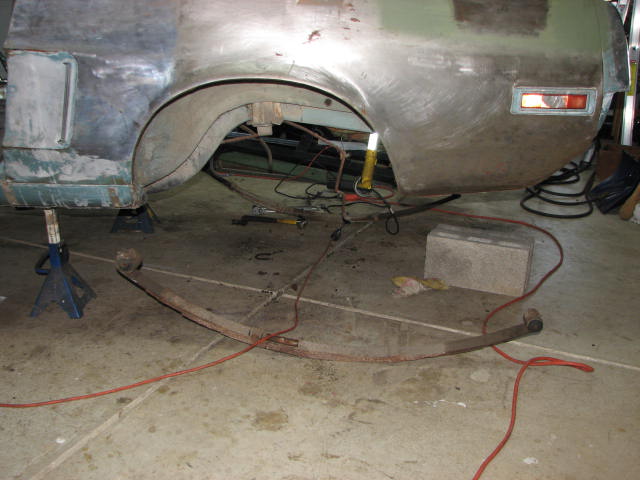 Proceeding to the passenger side, I cut through the right rear shackle bolt and dropped the back side of the spring to the ground.   I looked at the front spring bolt and it looked like it was spared of heavy corrosion. I decided to try just wrenching it out.   The remnant of the exhaust system was in the way.   So the wheel of death quickly cut the bolts and that was dropped out of the way.    On the front bolt I gave it a few shots of  PB Blaster.   With a tug on my breaker bar the bolt and nut came loose fairly easily.   A few minutes later, the right spring was on the ground.   Double Yay! 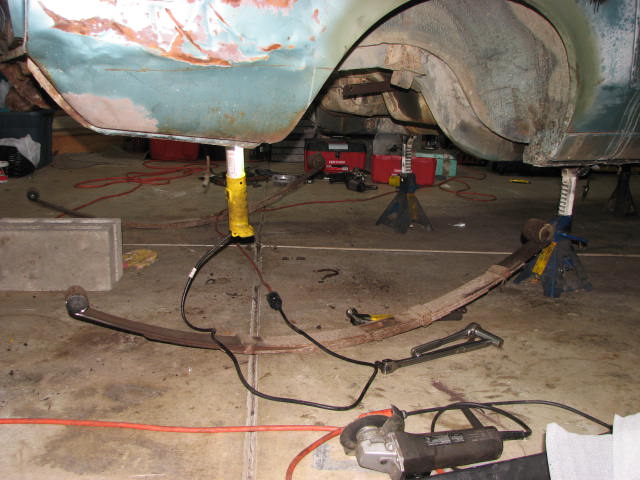 Wow. This was pretty painless so far.   I sprayed down the steering idler arm and steering box bolts with PB in anticipation of removing that as a whole assembly.  I picked up an Idler Arm separator at Autozone to add to my tool collection  (NO pickle forks on these joints)  to break the steering linkage down after I get it off the car.    While waiting for the PB to work, I decided to pull the passenger door off the car.   It took some patience since the door has not been disassembled and therefore, I had no direct access to the hinge bolts.  Working from the outside, I got the bolts out far enough to get some PB sprayed behind the hinge plate.   With a couple of bolts left to remove, my wife poked her head into the garage to let me know that my 3 year old granddaughter wanted to Skype with her grandpa.    I asked for a 10 minute reprieve to finish up the door removal.   So that cut my work short for the evening, which was OK.  Grandpa now....restorer later.   I did snap a few quick pictures of the car in it's current state of dissassembly though before ending the night. 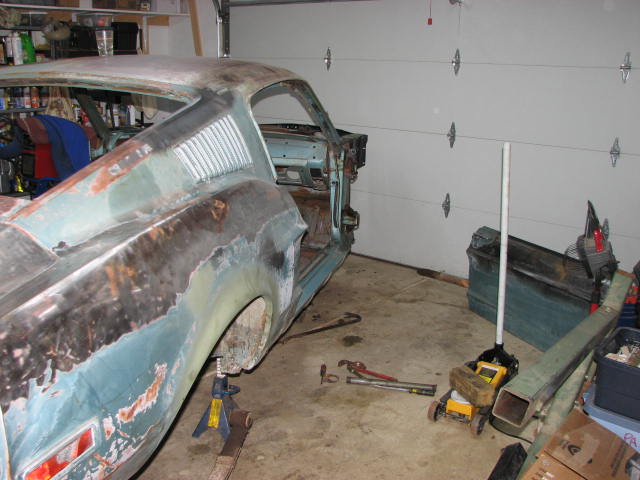 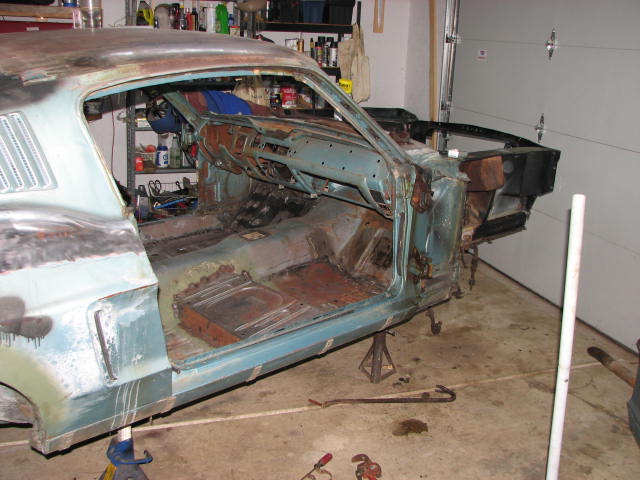 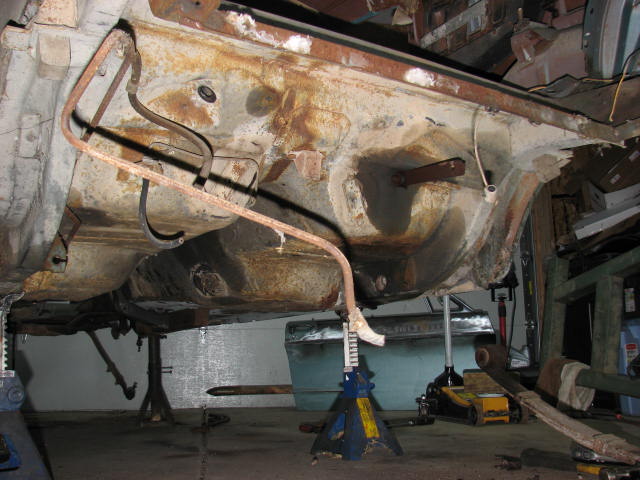 I am probably about an hour away from having the fastback ready for the rotisserie.   I hope to have the car on it by the end of the month.

There is one mystery that I have discovered about the car I've yet to solve.   I mentioned it before during the firewall repair, but I have found more evidence that the underside of the car was not painted in the traditional red oxide primer.  It appears to be black paint like the inside of the engine compartment.  This is especially evident for the transmission tunnel and the area around the front end of leaf spring perches.   Does anyone know if this was done to San Jose produced Mustangs?   It doesn't look like it was done as an afterthought.   could it be they were running low on primer that day and decided to just shoot everything black?   Who knows.   I'll take some more pictures and post them next time for y'all to see and give me your expert opinions.  I know my car isn't going to be a 100 point Concurs Mustang, but I'd like it to appear as close to original as possible, especially after going through all this effort.   The debate is now officially open....
Posted by deo1929 at 9:35 AM