Major Milestone: On the Rotisserie

This weekend was a major milestone in the almost 7 years I've had the fastback.   It started Friday afternoon with the removal of the power steering ram/linkage and steering box.  That was fairly easy thanks to my impact wrench.  Gotta love air tools, right? 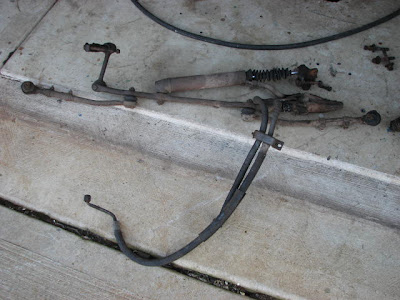 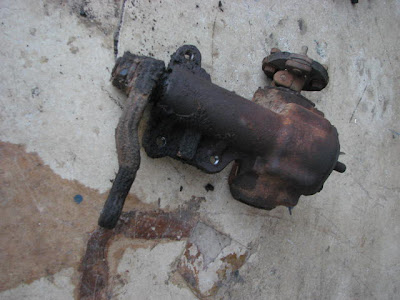 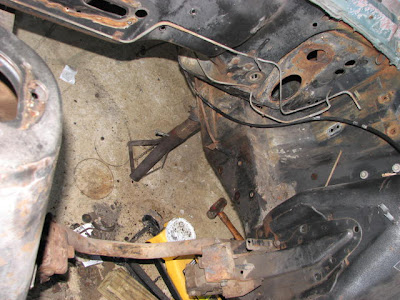 The engine bay is now stripped with the exception of brake lines and the crossmember which I want to leave in place for strength while it's on the rotisserie.   Speaking of that, I had to unearth the rotisserie  since it was stored among the 2 engines and 2 transmissions, the snow blower, and other miscellaneous stuff.   I bought it on eBay 4 years ago.  It's manufactured by a company called Fab Tech in Tulsa, Oklahoma.  This is one I got from a Shelby Mustang restorer in the Dayton, Ohio area who was retiring. 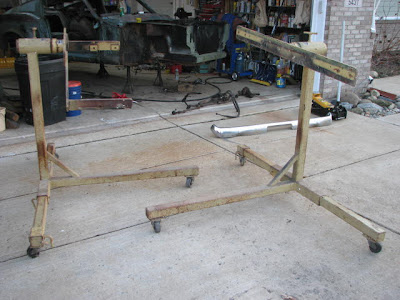 On Saturday, I got all the pieces out and was short a couple of clips that hold the mounting pins in place.   A quick trip to Lowes solved that.   These are the two ends all assembled and ready to go. 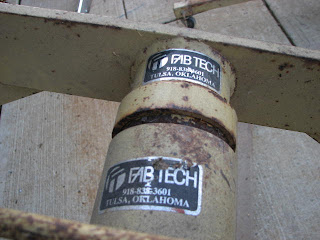 This was a specially designed rotisserie for first generation Mustangs.  I hear they are making them once again, but probably with more improvements like some of the newer rotisseries have.   This one has to be at least 30 years old.

I made another trip to Lowes to pick up some grade 5 bolts, washers, and nuts to mount the rotisserie heads to the car.  I also picked up a 7/16-14  tap to chase the threads on the front frame.  The rotisserie uses the bumper bracket mounts to hold it on. 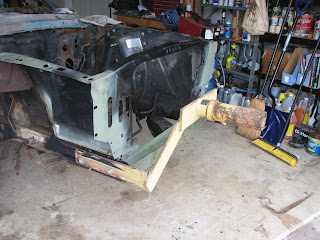 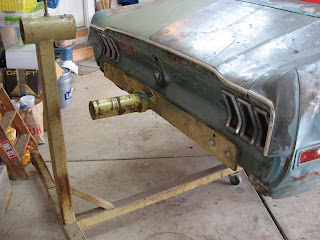 So now I was ready for some help, which came on Sunday afternoon.   My friend Glenn (the guy who found the car for me)  and 6 other guys from church came over around 4:30 PM.   We had to wait until qualifying for the Daytona 500 was over.   With 6 of us to lift the body and one person on each end to slide the rotisserie frames onto the front and rear head, it made quick work and an easy lift.  I have no idea how much a stripped body weighs, but it was much less than I thought it would be.   Here's a video of the event. 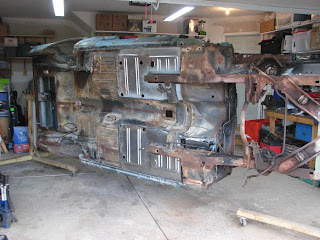 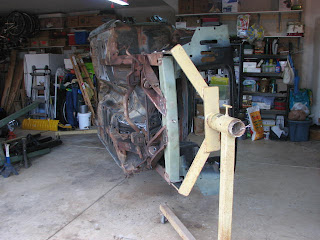 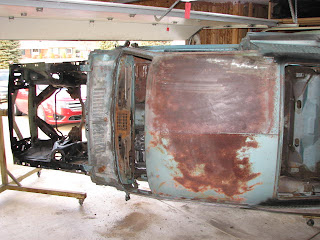 So my fastback is finally on the 'tis.  I have a piece of square tubing that I'm going to connect the two ends together so that the body isn't the main member taking the stress when rolling it around.   Now it's on to cleaning up the underside, doing all the metal work on the floors, putting in the new passenger toe pan patch, and finishing out the underside.   Progress is a beautiful thing.