There was a break in the temperatures this week...if you call a predicted high of 89F degrees on Saturday a break.  This summer heat wave has definitely hampered progress on the fastback.  I much prefer colder weather since you can always put on more clothes.  When it's hot, there's only so much you can take off...legally.

But weather aside, I've been pondering the next step on the car...finishing up the driver's side floor, or start work on the trunk drain lip or start on the rusty toe board...some part of the car that I could stand a chance of work in this heat.  So what did I decide to do was to jump into the fire and media blast the bottom of the car.  I already got a small start when I did my little "test" last week and made a nice mess in the garage.   I would be more prepared this time around.

For starters, I followed Sven's advice for personal protection equipment.  I somehow misplaced my respirator.  So a trip to Lowes snagged a nice 3M tekk respirator with the P100 cartridges.  These are good for, paints and toxic gasses including acid.   It may be overkill, but I have only one set of lungs I'd like to see finish this project. 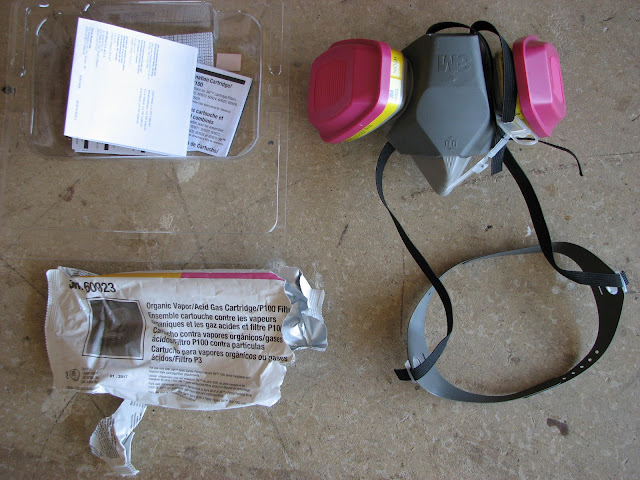 Then, from my last experience I posted previously, I didn't want to be covered in a mess of blasting media.  So I also picked up a "monkey suit" to keep me as media free as possible.  It has a hood and "booties" along with elastic at the wrists.

To be sure that my blasting wouldn't allow media to get in places that I didn't want, I obviously moved the fastback into the driveway. 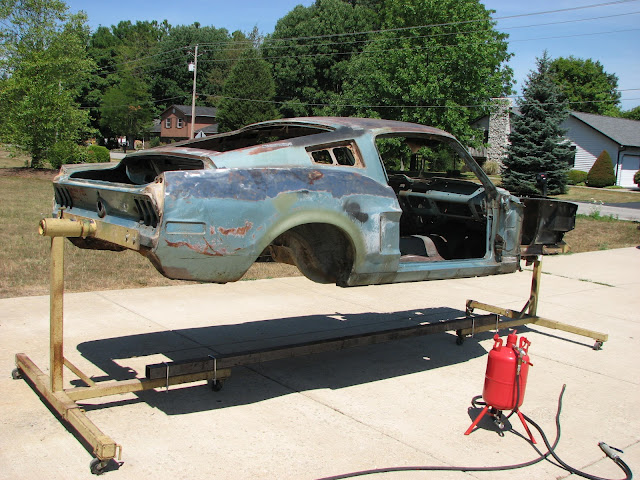 I moved all the vehicles to the end of the driveway hoping that the blasting force and the breeze wouldn't carry it onto the cars.   Hopefully they would be out of harms way.... 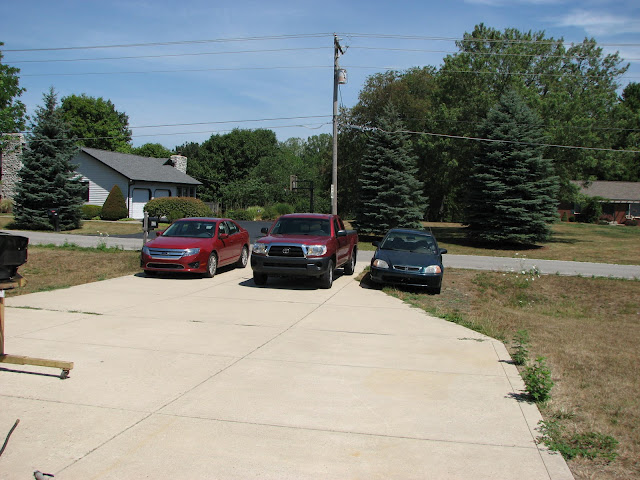 Then after getting all the equipment and media staged, it was time to suit up.   I definitely won't win any beauty contests but it's about function, not form. 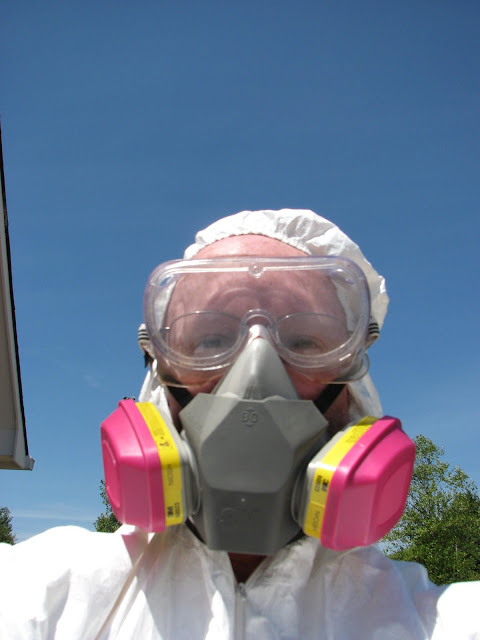 Now it's on to the work.   I got the Mustang rolled on its side.  I started on the driver's side rear seat floor and moved right towards the firewall.  Then I did the area over the rear axle and moved to the rear of the car.  I started on the passenger side and worked my way forward to the firewall again.  The top and bottom of the car on the rotisserie is a good "before" and "after" view. 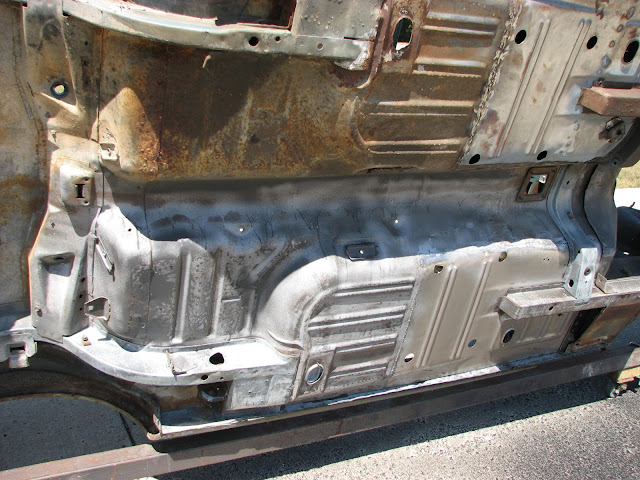 This all sounds so nice and easy, but it was anything but.   First of all, my media blaster held only 20 pounds at a time.  That was good for maybe--maybe 4-5 minutes of blast time.  Then I would have to purge the air, load it up, re-pressurise, and blast away.   I had put in my last load that emptied the first 100 pound bag of media.  When I got done, I could have broken out the other bag, but there was, for all practical purposes, 100 pounds of media in my driveway, minus the losses from the wind, what was in the car, and what ended up in the yard.   After sweeping the media into a pile, I noticed there was a lot of foreign debris.  I had a screen in the garage I put over my media pail. 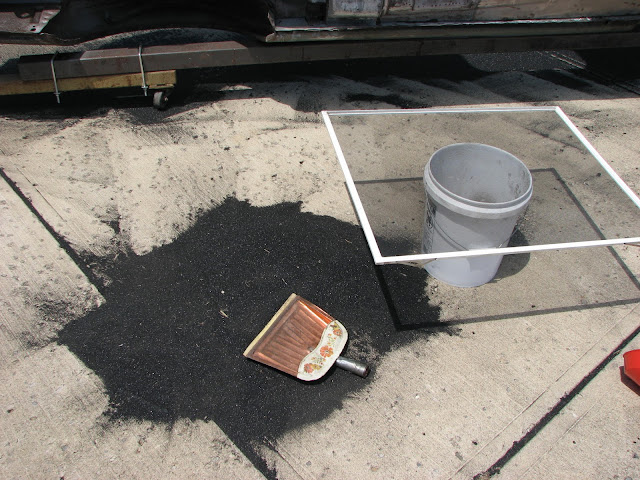 Then I scooped up some of the media and poured it onto the screen, shaking it back and forth to sift it through. 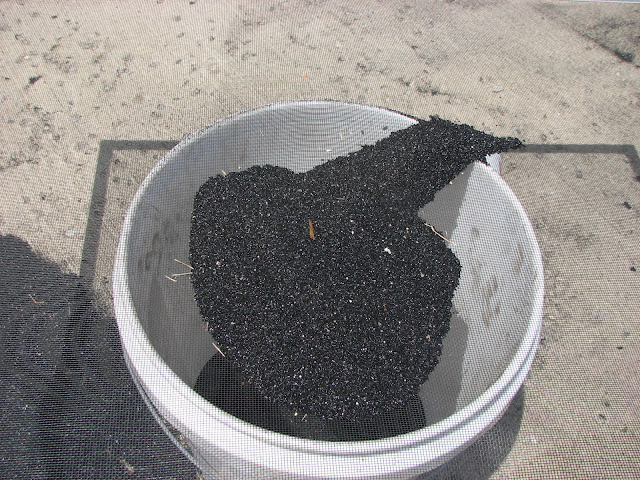 When I got done, the debris was visible.   I dumped it off the side of the drive.  I took the sifted media and put it in the blaster.  It worked with no problems. 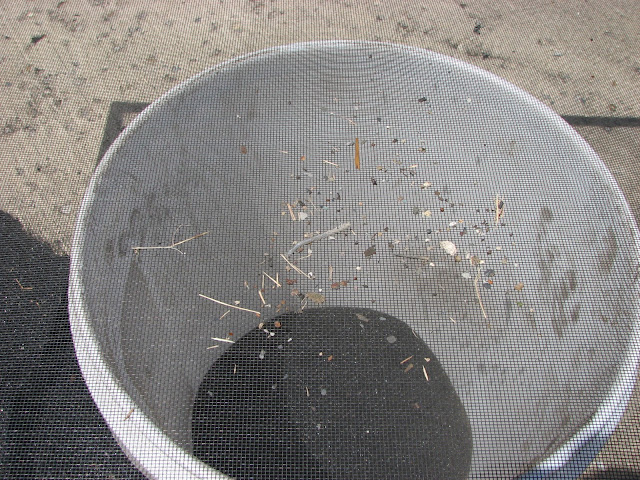 So this is the process that took four and a half hours.  I got the bottom of the car done and did do the front frame rails and the lower part of the firewall.   I did do some of the fender aprons where there was surface rust.   I had to take breaks to re-hydrate and move the car into position as the sun progressed to get the best visibility.   By 4 PM, I was hot, I had finished dumping the third round of media recycle, and the temperature decided to go north of 90F degrees. 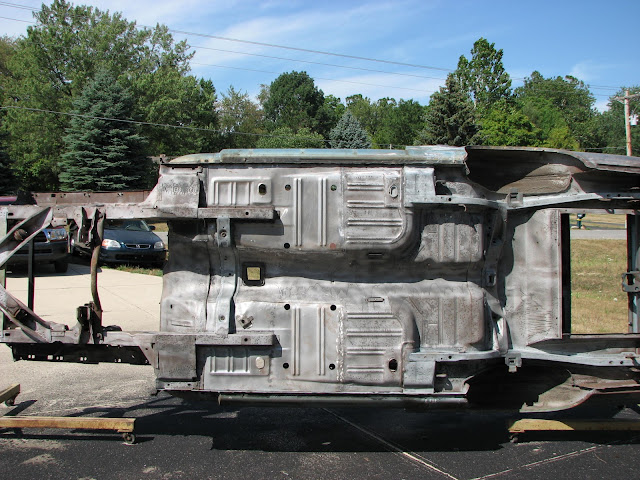 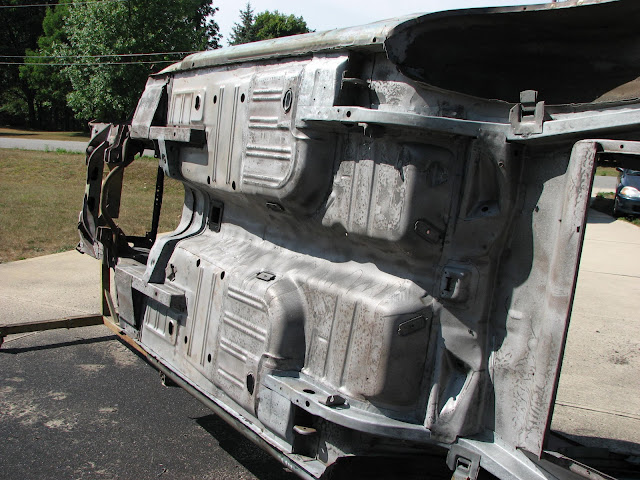 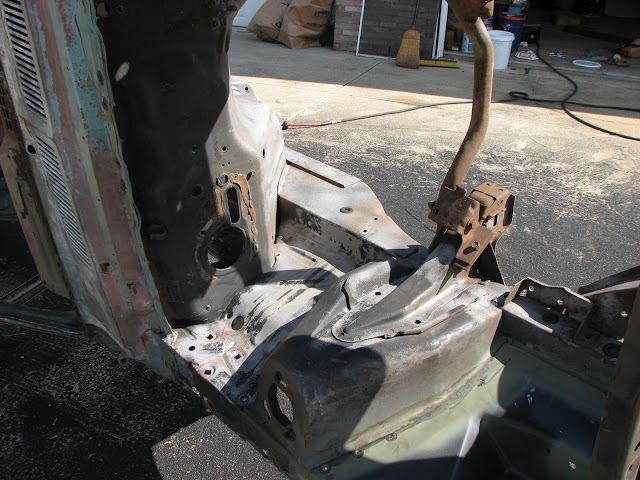 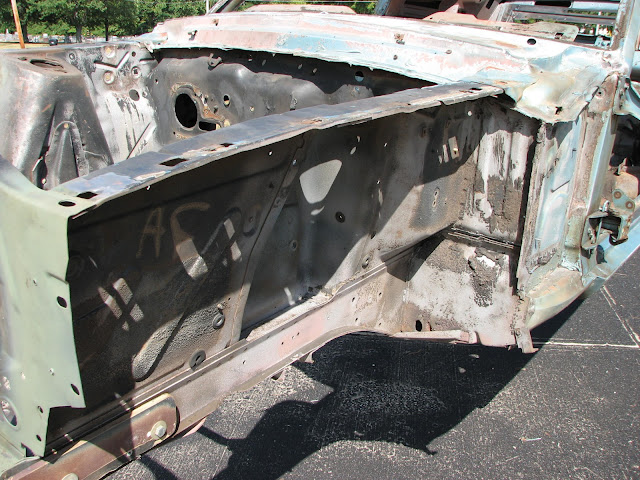 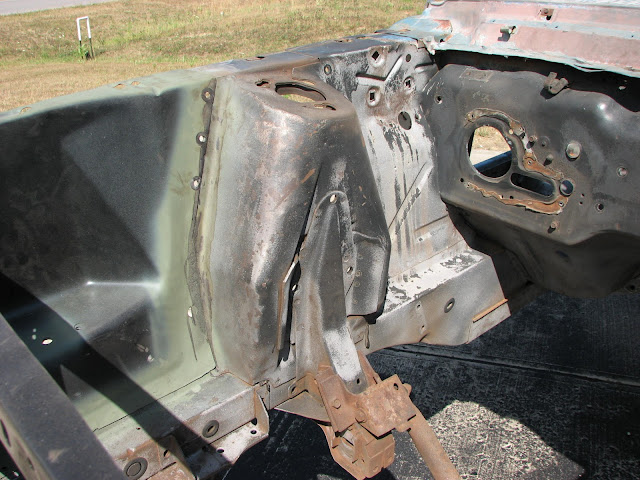 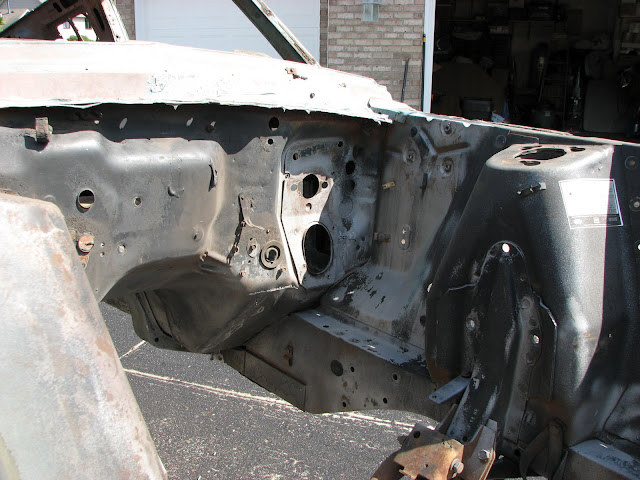 Of course, not all was sunshine and roses.  I did find during the process some more of that wonderful iron oxide deposits called rust.   The passenger side trunk drop-off definitely showed it's true colors. 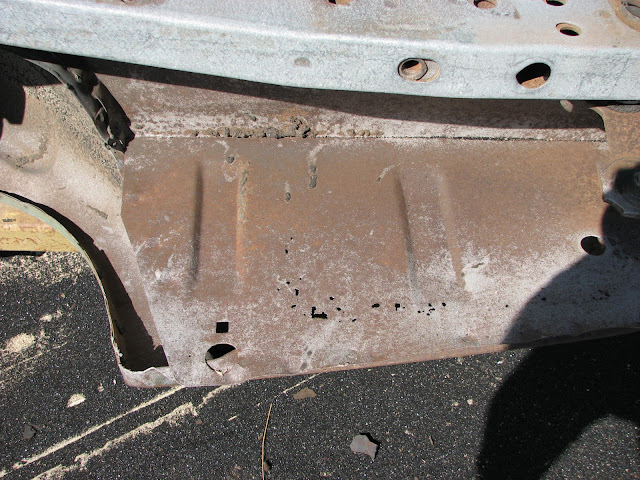 There are rust holes in the lower 2 inches.  The rest looks good along with the trunk floor, which is a relief.  So I'll need to order that part and add that to the list of rust repairs.  (Any suggestions on vendors would be appreciated)   The rough looking metal at the top of the picture is actually undercoating that needs to be removed.

Then I found some pin holes in the passenger side rear floor.  This isn't to bad and can be easily patched.   There's a small one on the floor just inside the right rear fender well that will also be an easy fix....or I hope all of these will. 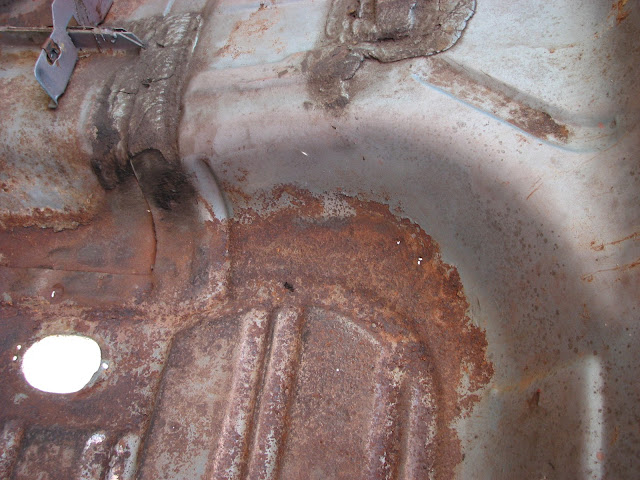 When my wife asked how it was going, I mentioned the rust I found and the extra work needed.  She rather stoically says, "Better to find it now than later."   I guess that's true, especially after what Alex found late in the bodywork and paint process.  I took the 3" square tubing off the rotisserie so I could spin the car 360 degrees and blow the media out of it.  That took several turns to get most of it out.  The rest will have to be by shop vac.  I'm not sure what I'm going to do about the factory undercoating in the rear wheel wells.  It was not budging much, even with repeated passes.  The body color paint came off, but that was about it.

This was all I got done.  I was tired, hot, and had a mess to clean up.   I got some help from my better half getting the car back into the garage since my back was getting pretty stiff.   So the fastback is back where it started the day, and in much cleaner condition.  It may not be a "professional" job, but it's better than manning a whirly-bird and sander. 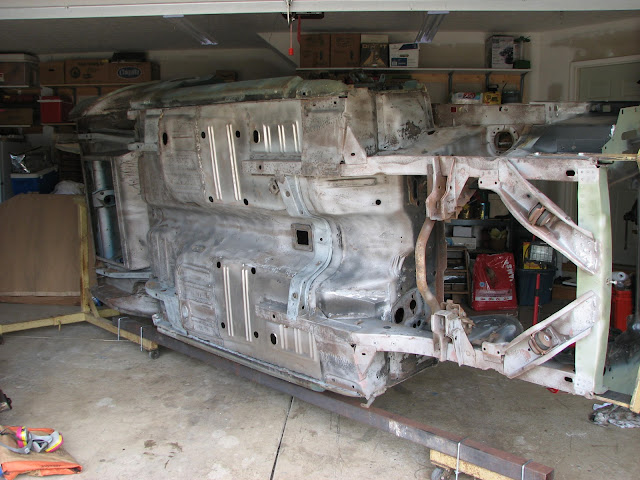 I think at this point I'm going to call this quits on media blasting since I can get the rest of the car, particularly the inside,  cleaned up with the braided wire brush.


Reflecting on this exhausting and demanding task, I will say it was worth the effort.  I was able to get some nooks and crannies cleaned out that would have been difficult any other way.   I identified a couple  more areas of rust repair.  and the cleanliness of the metal is better than using a whirly-bird.   Messy?  Yes.  Demanding?  You betcha.   Would I do it again?  In a heartbeat.

Now it's on to ordering the trunk drop off and getting back to the underside of the floor work.  With family coming in for the Brickyard races this weekend and the continuing 90+  temperatures in the forecast this coming week again,  it may be better than a week or so before I get back on the Mustang.  But at least it's ready to go whenever I am.