This floor work has been a slow process, painfully so at some points.  In part it's due to things outside my control, such as today being the 30th day that the high will be above 90 for temperature.  Unfortunately I don't have an air conditioned garage and even if I wanted to put a 12,000 BTU AC unit in the garage window, there are none to be found either in stores or Craigslist.  The other part that's hampered progress so far this summer has been a rather relentless schedule.  The second week of June was the push to get ready for Vacation Bible School.  The third week in June was VBS and as the "music man" I was the person doing all the music for all the age groups.  It was 4 hours of non-stop singing and playing the guitar.   The last week in June I flew out on Sunday afternoon to Phoenix and Sedona for a few days to spend some time with my wife who was in between conferences.  I got home on  Wednesday evening and then repacked and left 12 hours later for a 2 day convention in Fort Wayne, Indiana.  Then it was back home Friday night with one day to pack myself and my 88 year old mother in law for a vacation to northwest Michigan to the family cabin.  I got up there on Sunday evening and got her settled in.  My daughter and her family joined us as well.  Then early Monday, I drove down to Grand Rapids to pick up my wife who took the "red eye" from Phoenix after her conference ended.   Keeping up with an almost 2 year old and a 4 year old can keep you busy, along with caring for an 88 year old.  I did all the cooking for the family.   But my son-in-law and I had great fishing this year and there were no major maintenance things to do this trip.   I got home a week ago today and was faced with what happens so often--a backlog of work from being gone for two weeks.  But that's how life goes.

I do have to say, I have been working on the car.  It's that it wasn't the Mustang.  My daily driver '97 Honda Civic with just over 279,000 miles decided that the AC compressor only wanted to cool the car for 5 minutes and then do nothing.  The local shop who does the work on my "fleet" when I'm unable to diagnosed it as a bad thermocouple.  Unfortunately, Honda/Acura thermocouples are internal to the compressor which means the compressor had to be replaced.  I got a "kit" from discountacparts.com.  I got the compressor, receiver/dryer, and expansion valve, all which have to be installed for the compressor warranty.  The shop removed the R-134 so I could safely open the system.   I now know why they wanted  $1,200 to put the parts in.  Getting to the evaporator in the dash was a 3 hour project by itself.  Access to the compressor and dryer was nominally better.  To make a long story short, the AC project stretched over 8 hours and 3 days.   I got it back together just before my 2 weeks of travel.   I got the car back to the shop this past week and now have working AC. I figured it was good practice for the Mustang when I put the factory AC back in it.

So as this past weekend approached with not much on the schedule and the promise of cooler temps and rain, it sounded like a good time to get back on the Mustang.   Well, as Meatloaf sang on his "Bat Out of Hell" album, "Two out of Three Ain't bad."   I did get some work done on the Mustang, but it was hot and dry.

The first order of business was to finish the bagging and tagging of some of the parts I hadn't  taken care of.  I finished drilling out the rivets that held the plastic clips for right side rocker panel molding so I could put them with the rest of the parts.  With that behind me I picked up the garage that had a myriad of things laying around from vacation, the AC work, and the accumulation of crap from who knows where that just gets thrown into the garage.

As I was doing the garage cleaning I moved some tools out of the garage like my welder and media blast tank.  Then I thought, "Hmmm.   It would be fun to finally connect that blaster up and see how it worked."    It had about 10 pound of media I had previously put in it hoping to try it before this.  That should be enough for my "test."

With the hose connected and everything on the blaster adjusted, I began on the floor bottom behind the new driver's side floor pan and the transmission tunnel.   Here's a picture of the area"before" being blasted.... 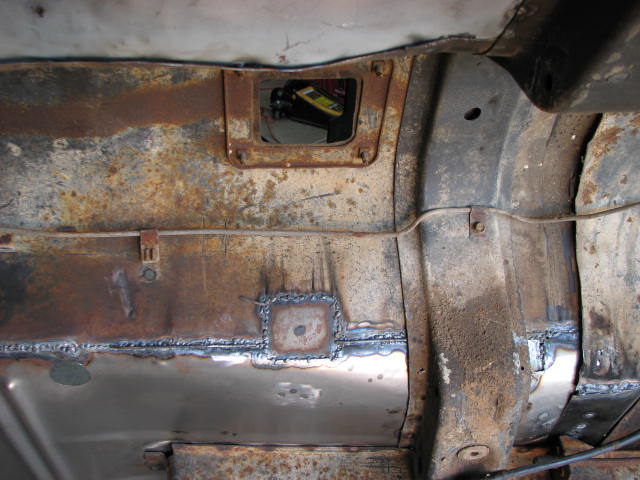 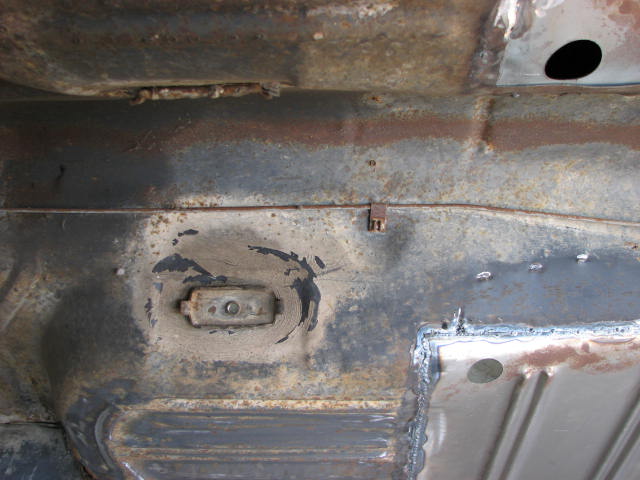 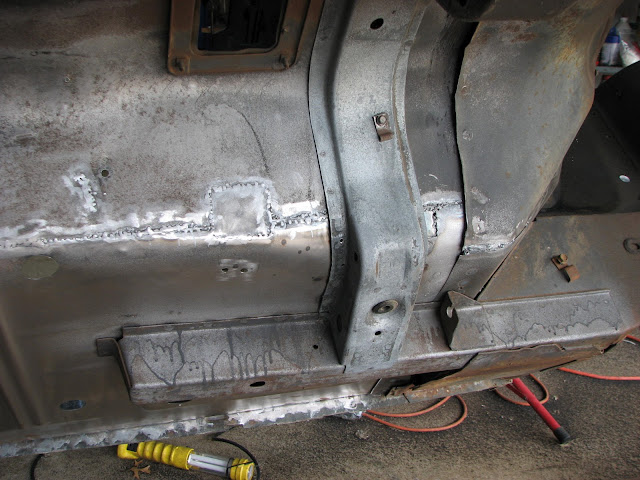 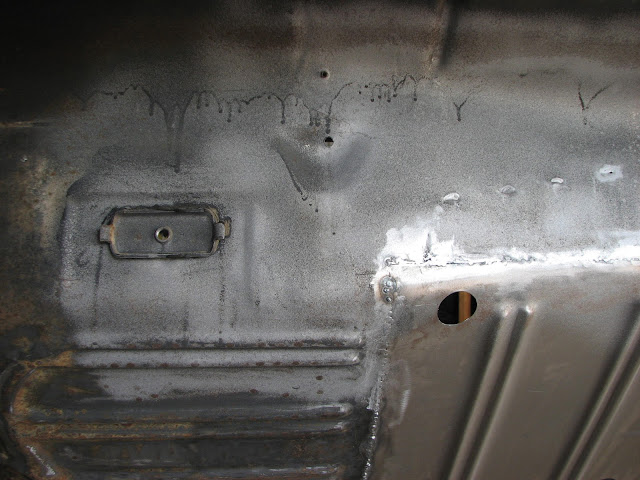 The good news is that it really did a nice job.  In fact, there are placed on the seam weld where you can't even see the weld joint.  I was very pleased with the results.  I would have kept going, but I ran out of "black beauty" and decided the test was successful.   Like I said, that was the good news.

Now for the bad...   I realized I had blasted away all my markings for the welding pinholes.  That's not that bad of news since I can put my halogen flood behind the floor and find them again.  The real bad news was this... 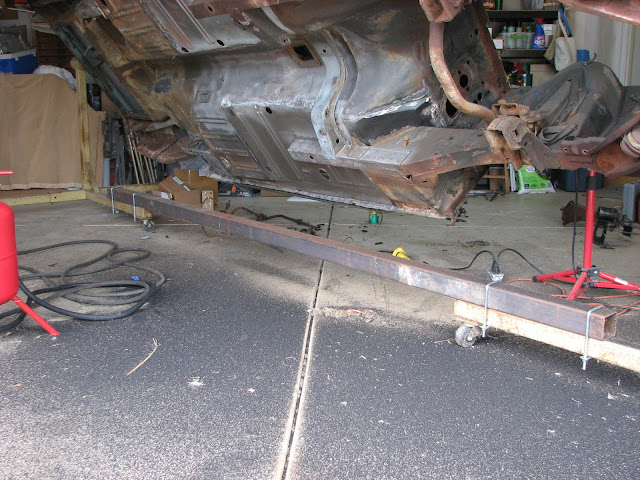 At first, the media on the floor didn't look so bad.  I though that with the angle of the car and the direction of the blasting I'd be OK as far as controlling where the media went.  WRONG!   It was everywhere in the garage...EVERYWHERE!    So my little 5 minutes of blasting turned into an hour of cleanup and I still have more to do.   It even got up into the garage door tracks.  Great.

To be able to clean out the garage better, I moved the Mustang out into the driveway.   It too was full of the media in places I wouldn't have expected, the interior being one of them.   I rolled the car over while simultaneously trying to blow the media out of the car. 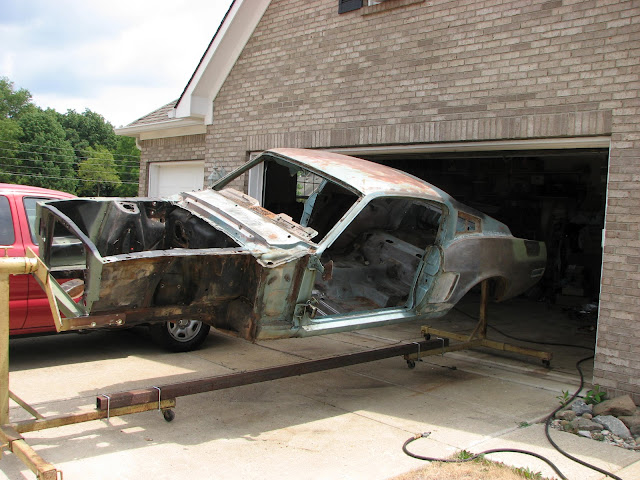 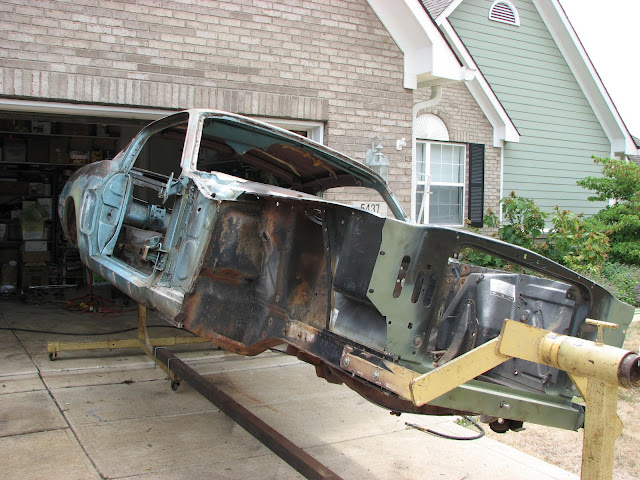 This is the first time it was outside on the rotisserie.  One side effect of moving the fastback outside is that it was a real showstopper.   People were slowing down and gawking at it.  Another side effect is that I could see the work I've done and what has to be done much better out in the daylight.

I got the majority of the mess cleaned up and got the Mustang back in the garage.  Obviously, there was one big lesson learned.   BLAST OUTSIDE!  And close the garage door too!   Live and learn, right?

I was hoping to get to work on it Sunday afternoon, but by 1 PM  the temperature was already north of 90 degrees and climbing.  I can't run my fan while welding because I'll loose all my shielding gas.  Then there's the issue of keeping myself hydrated enough, which has been a struggle lately.  So I'll be waiting for the temps to drop to something reasonable which right now I'd take anything in the mid 80's which is what our normal high would be.   But that's ain't happening anytime soon.  The temperatures this week are forecast to be in the mid to high 90's.   So I'll have to revisit my plan and maybe move onto another part of the car that doesn't require welding.   Besides, I've got that passenger side toe board to replace.  And there's the rust in the upper right corner of the trunk lip that needs to be repaired.   So I'll see if I can get the garage more comfortable and move on with something else.   I'll take progress...any progress...at this point.
Posted by deo1929 at 9:49 AM