The summer solstice is today.  Longest day of the year...and one of the hottest and most humid here in central Indiana.  Actually, it's moderated quite a bit, that is, if you want to call a high in the mid 80's cooler than the low 90's.   There are days like this I miss the cool days of northern Michigan when I lived up around the Straits of Mackinac.   Cool breezes blowing off of Lake Huron.  Nice comfortable temperatures inland in the high 70's.   Golf.  Sailing.   Visits to Mackinac Island.  Fudge.   It's a great place to spend a summer.   But this entry isn't about the weather or about a nice place to spend the summer.  It's about a car...a one-of-one car that has been inhabiting my garage for 9 plus years.

Activity has been slow of late on the fastback.  As far as the rest of life?  Well, it's been borderline chaotic.   I helped move my daughter and her newly minted MD husband to the Washington DC area where he will be a pathology resident at Georgetown University Hospital.  Quite a prestigious position.   I did the front-end of the move--packing and loading that was quite an ordeal considering I had to manage a U-Haul truck, a U-Haul trailer and 3 vehicles in downtown Chicago with on-street parking.  We begged for rented parking spaces in the apartment building from a couple of gracious tenants for loading.  Then driving through downtown was even more fun, especially with major construction on I-94 looming.   The upshot is we make it back to Indy in one piece and with everything intact.  Speaking of intact...

The kids new apartment in Alexandria, Virginia isn't as big but it has much nicer amenities.  The problem is that there were some things they couldn't take with them, like a huge 9 drawer dresser that my wife's grandfather made for her when she was growing up.  It's become a family heirloom of sorts even though it's not the greatest piece of furniture.  I also got 2 mountain bikes.  What does all this mean?  I had to get this stuff out of the garage and into storage.  So that necessitated a total reorganization of the storage shed to get this ginormous piece of furniture in it and all the rest of my Mustang parts back in somehow.   I put my former Industrial Engineering background to work and after an hour and a half, I had everything in its proper place.  I also decided to retrieve the original driver's side fender and the hood.  I figured I might as well work on the hood with both fenders.

That was three weeks ago.  Between then and now was preparing for our church Vacation Bible School that was this past week.  I am the "music man" and do all the songs for the week with my trusty Alvarez guitar.  We finished up last night.  It was an exhausting but fulfilling week.   I also have had to plan and pack for a trip to Edmonton, Alberta tomorrow.  But that's another story that I'll have to explain later.

With a couple of hours window this afternoon, I decided to start the work on the driver's side fender.  From my last episode, I discovered I would either have to repair or replace the headlight bucket support and repair the rust in the lower rear corner of the fender.   So the original fender went on the stand for evaluation.

Initially, I was wondering if the direction to go would be to repair this one, even though it would take more bodywork and some welding of the torn metal. 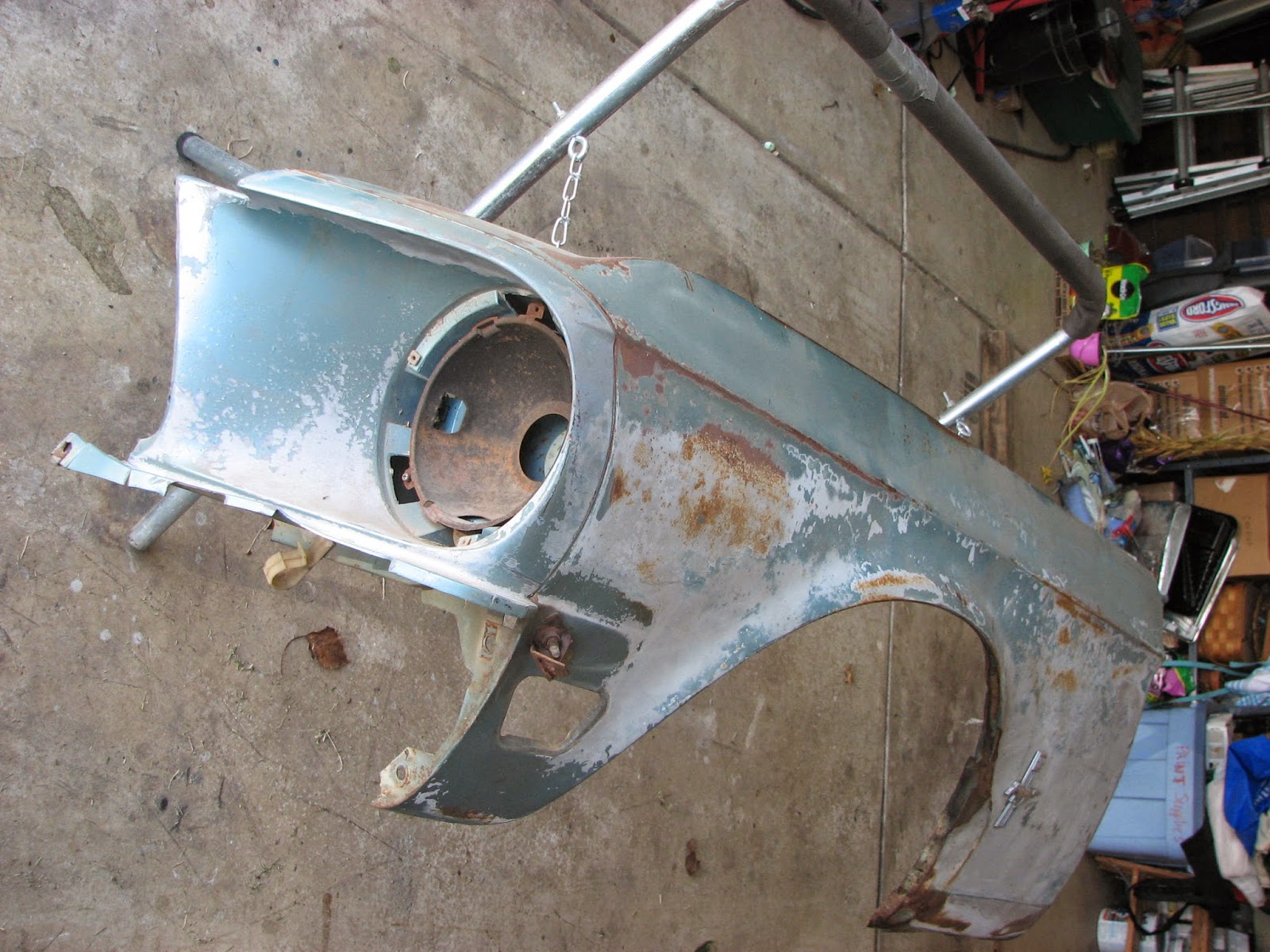 I took the emblems off and looked at the outside surface.  There was no rust in the corner like in the other fender.   That was good news. 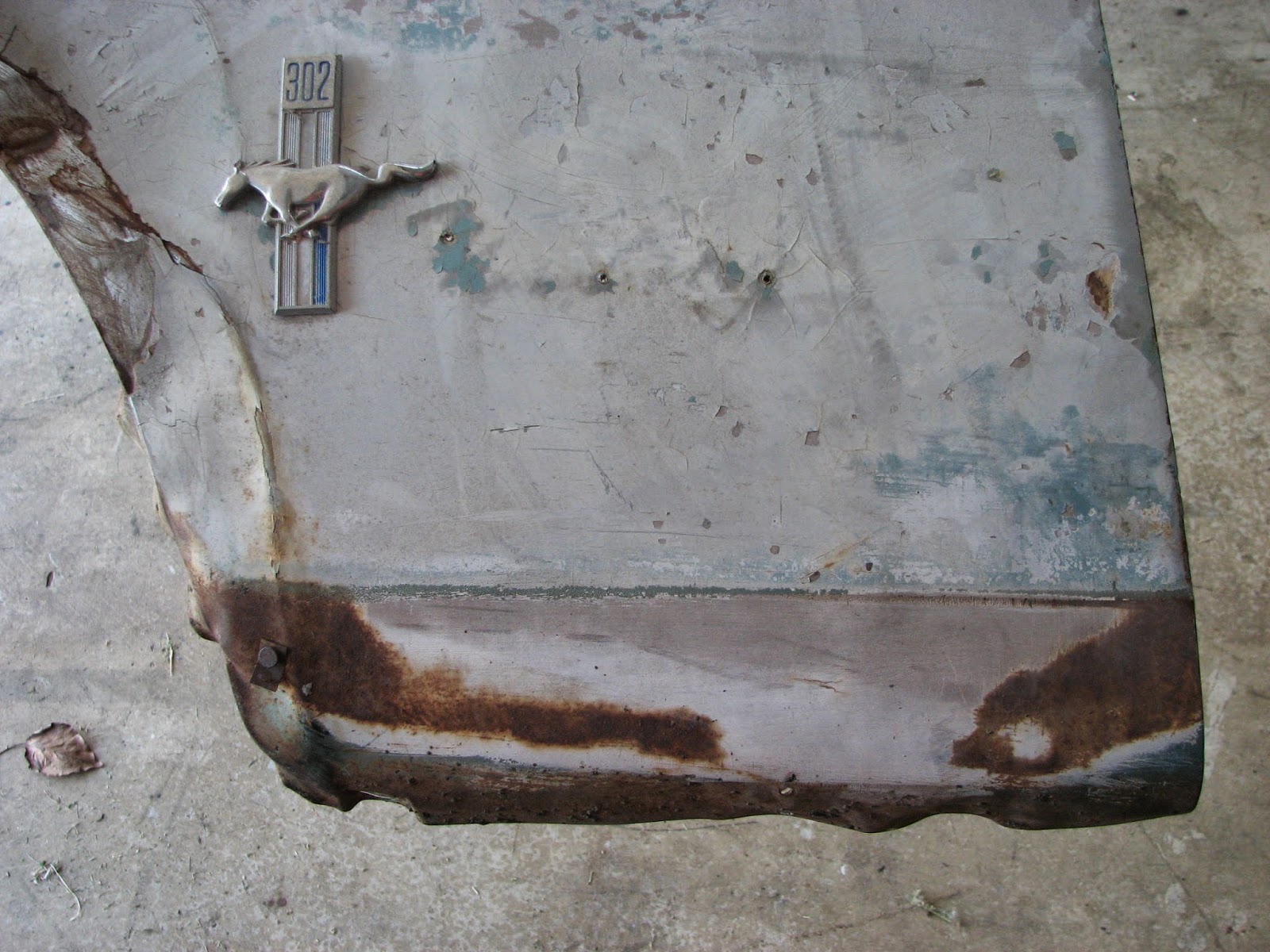 The better news what the lower rear corner was in near-perfect shape especially the inside support.  No rust whatsoever and there was no distortion of the fender mounting hole and flange. 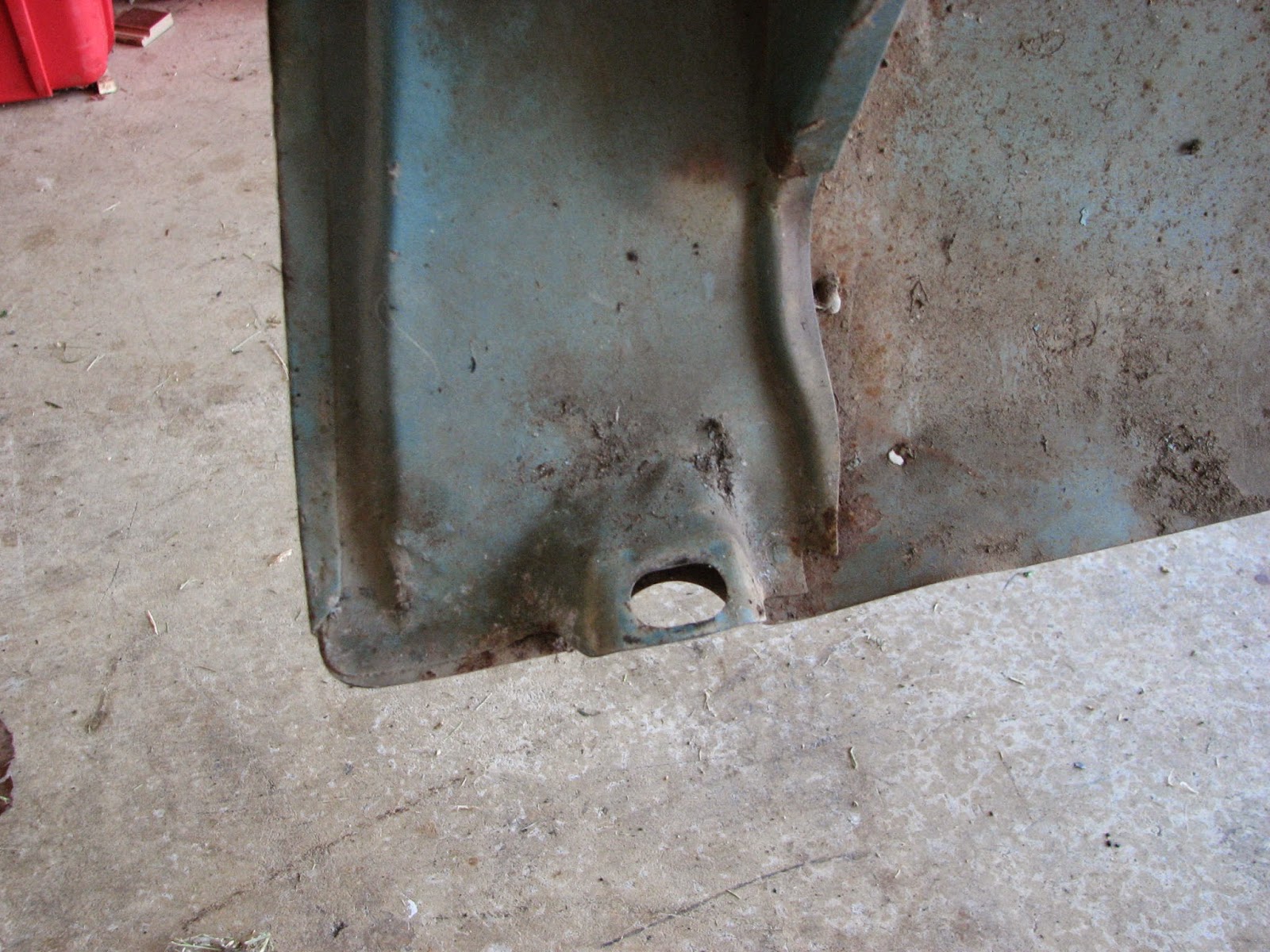 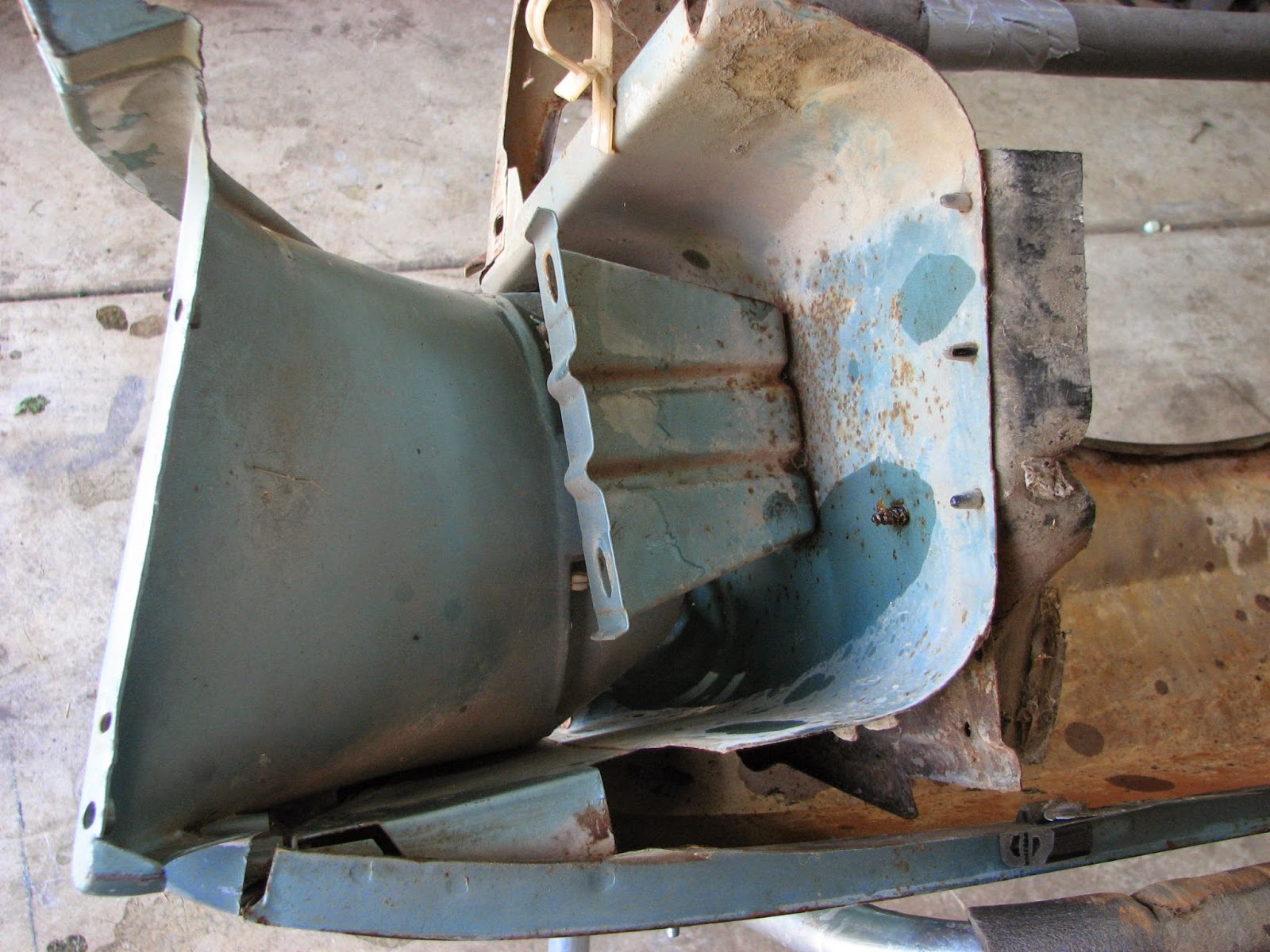 This is the inner front fender guard.  This will be replaced with a new piece.  Even this only had surface rust. 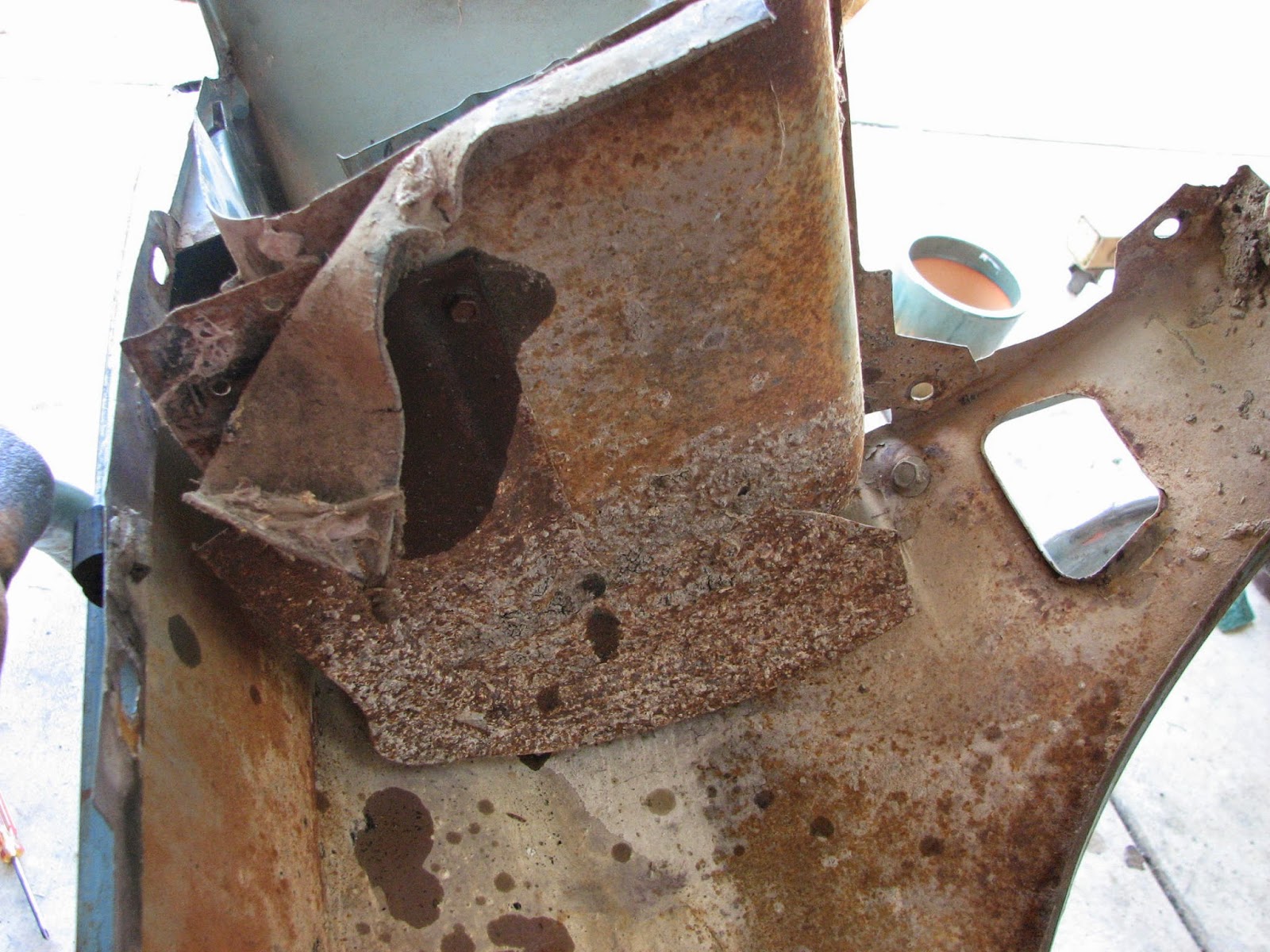 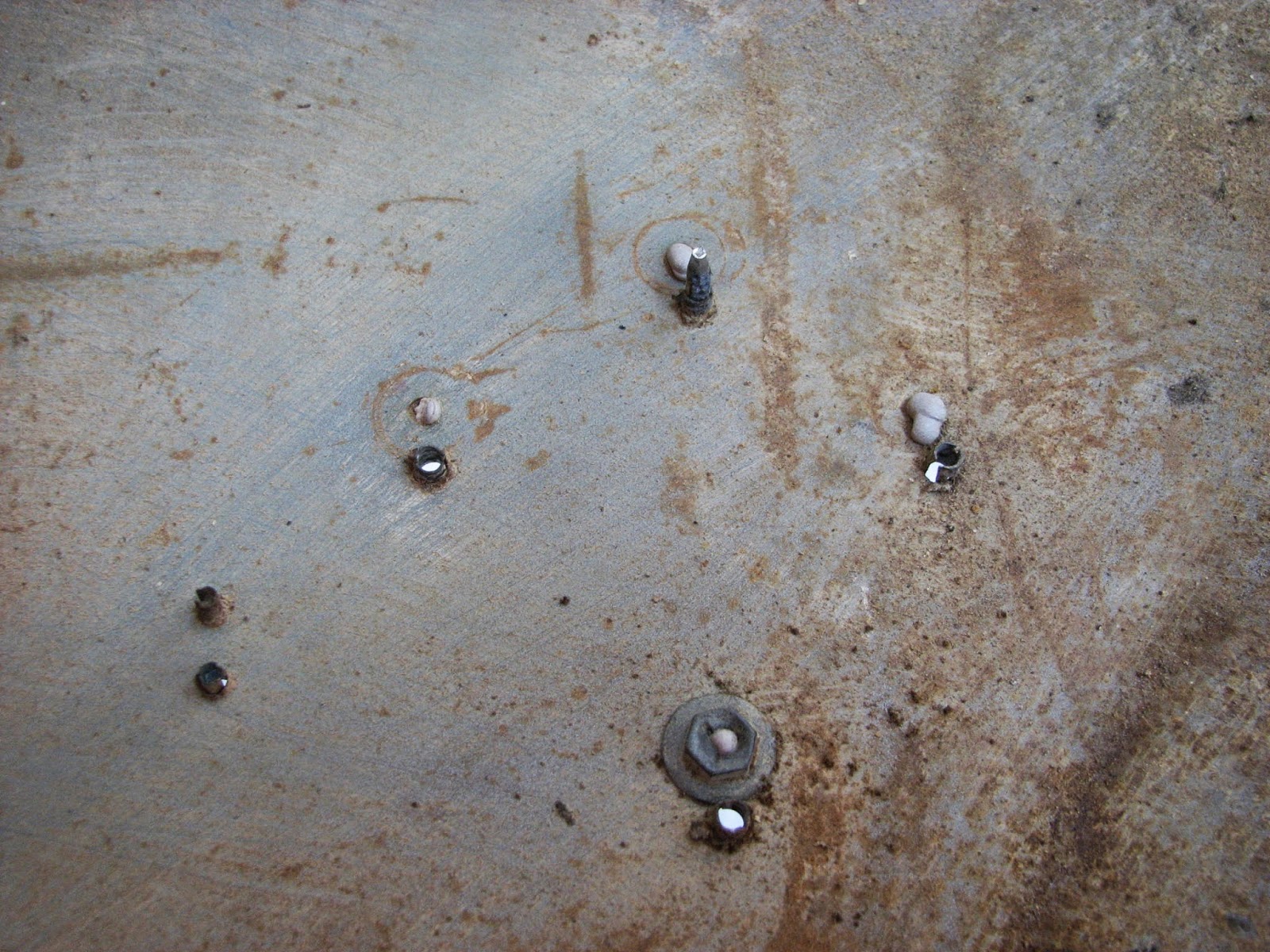 I can't believe a previous repair smeared filler over the old trim holes and then they redrilled the mounting holes a half inch higher than the original holes!!!   That led to finding this... 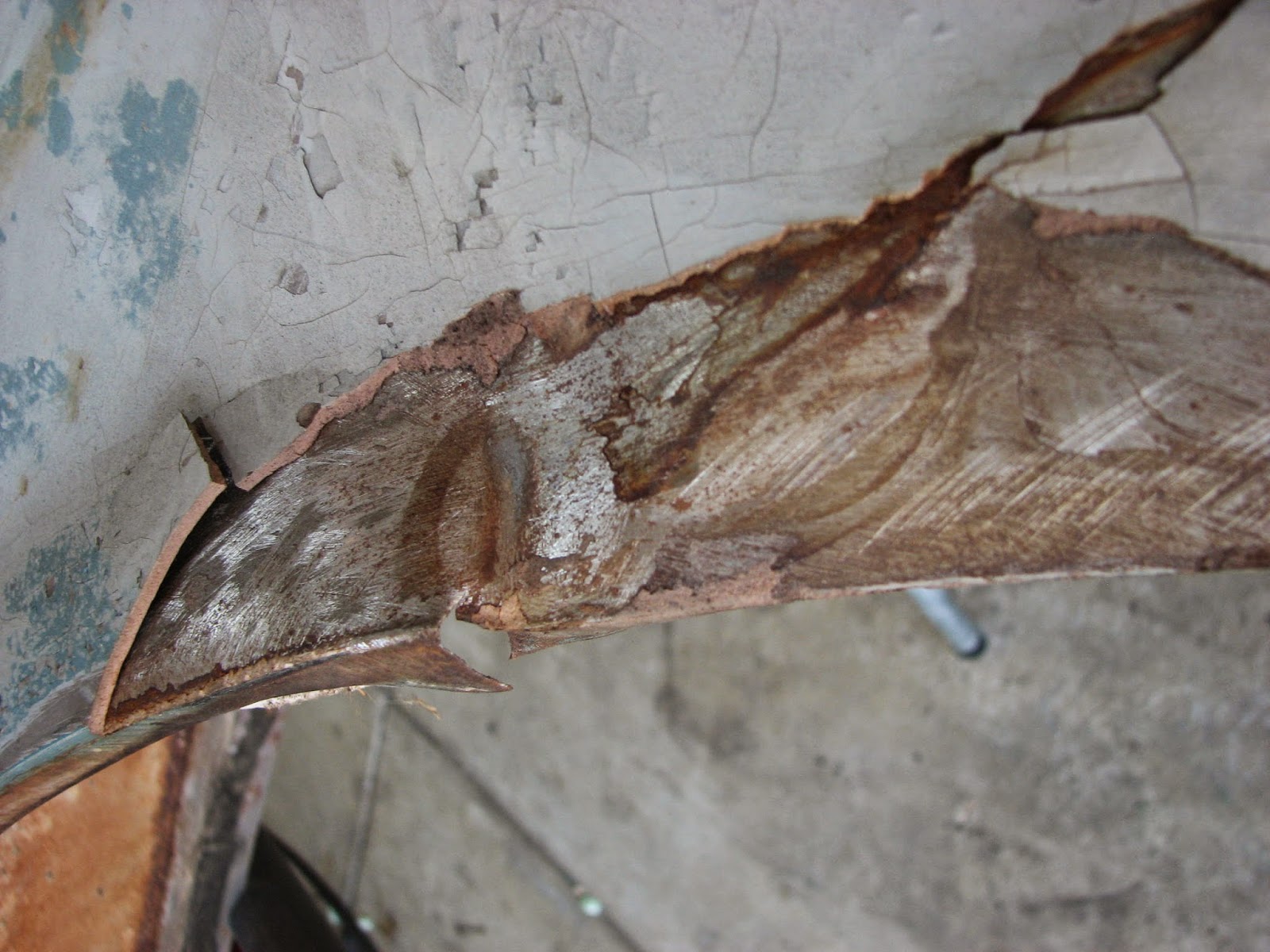 Good grief!  Poking and prodding and scraping revealed a whole lot of filler spread over a wide area.  Who knows what I would find after stripping the filler off the fender. 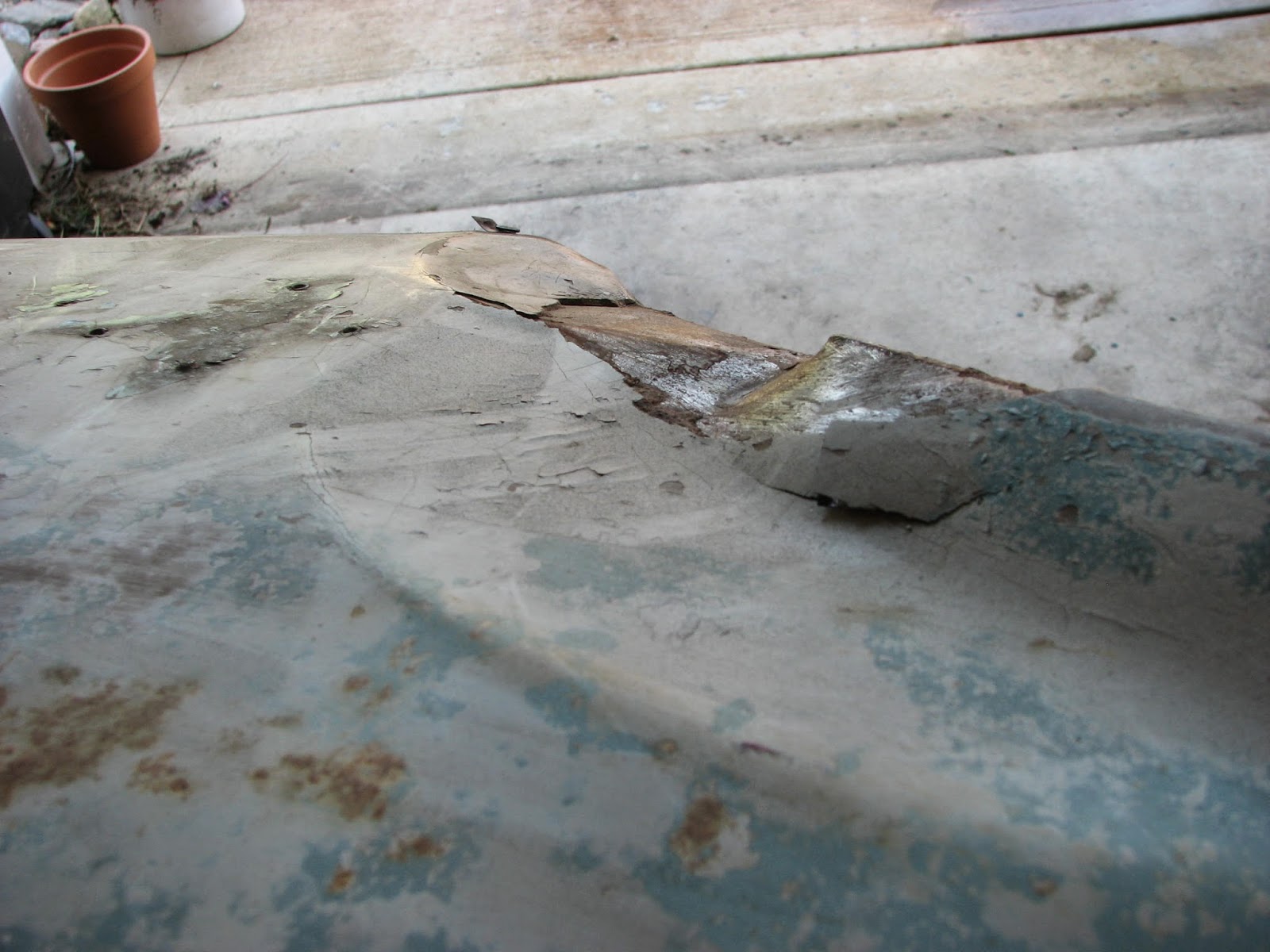 And to top it off, I found another area where some smart body person drilled holes to make sure the thick filler would not fall off.  The filler was cracking and that's not a good sign. 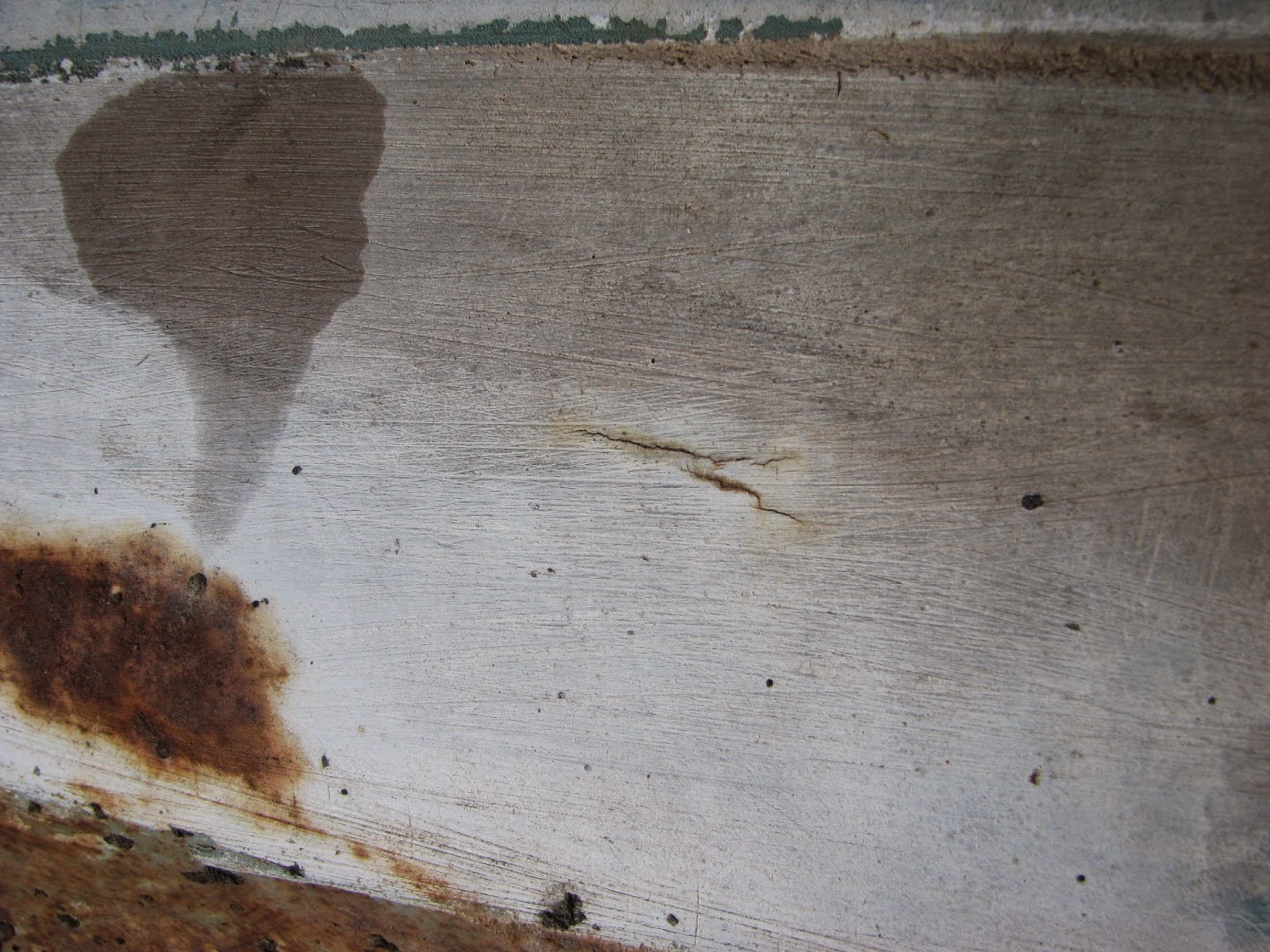 So I reverted to Plan A to use the original fender as a donor to repair the rust in the other fender.  The first order of business was to remove the headlight support structure.  I got out my Blair 3/8" spot weld cutter mounted to my DeWalt variable speed drill.  After cleaning off the flange where the spot welds are to better I.D. where they were, I center punched them and drilled them out.

I didn't have to worry about the fender, but I had to be careful not to go too far and drill through the bucket flange. 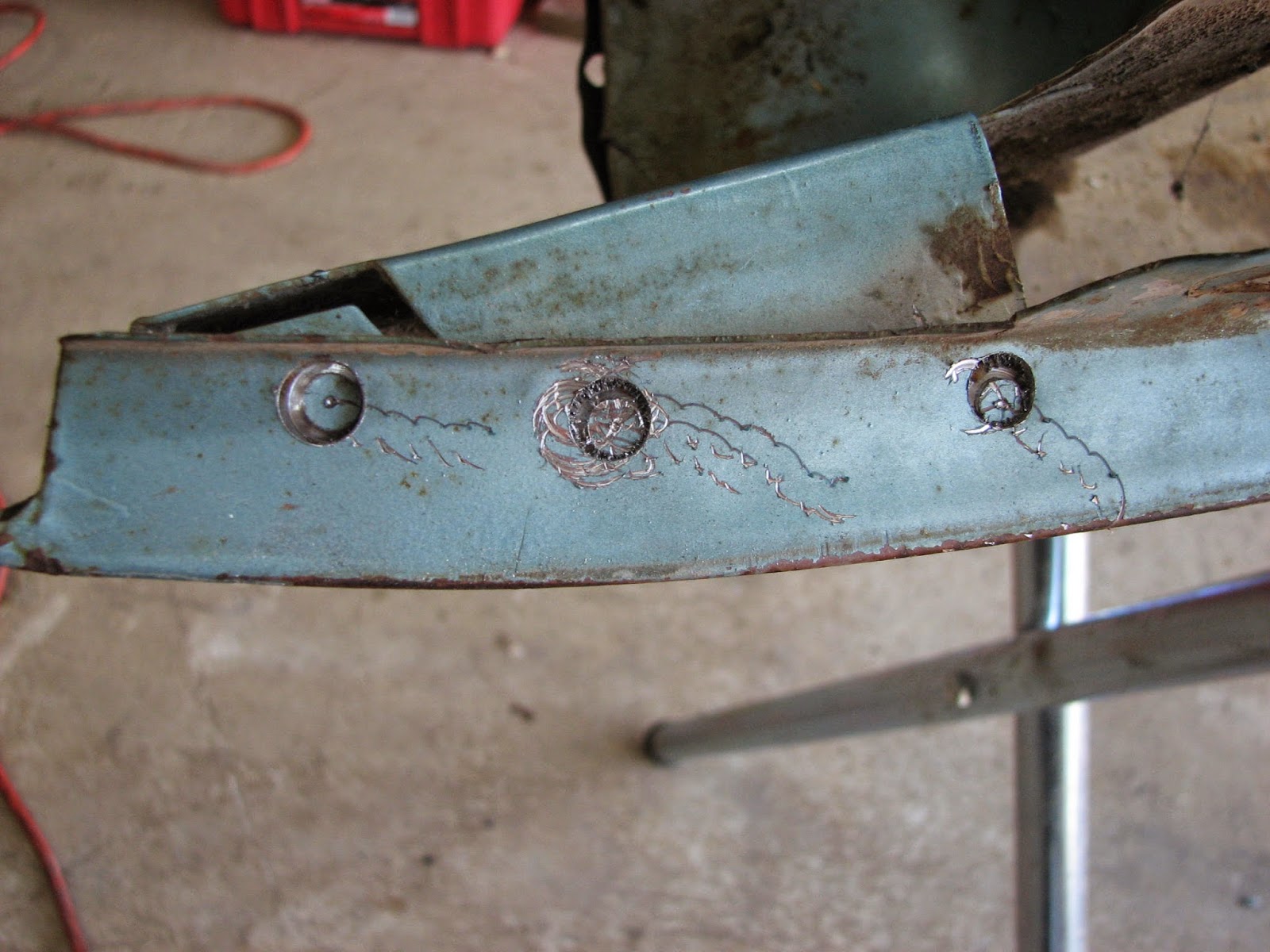 After 11 spot welds were drilled out, the bucket came loose with no heavy prying or persuading.   The front side... 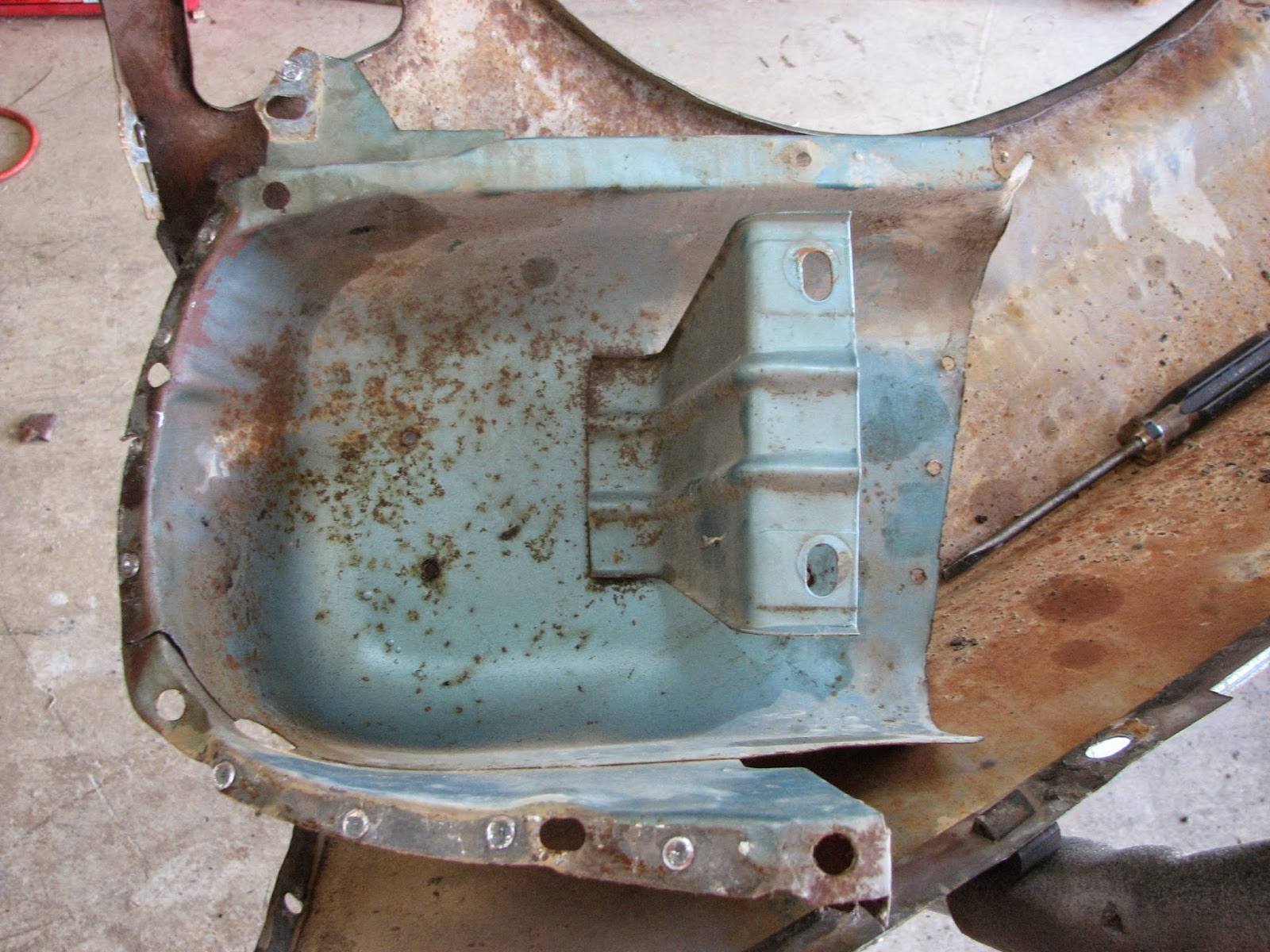 ...and the back side of the bucket. 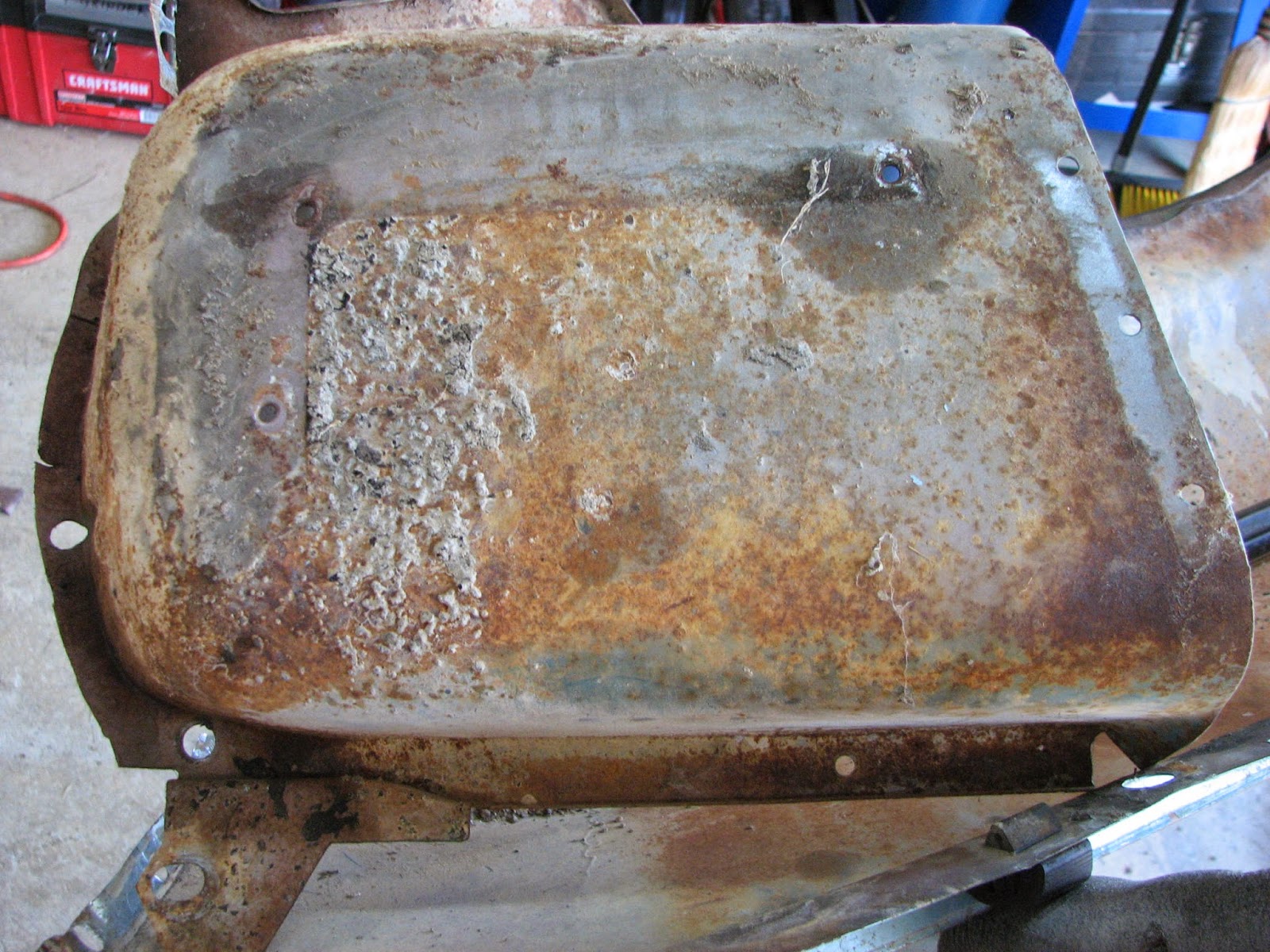 ...and the back side that was hidden by the fender side and top.   So far, so good. 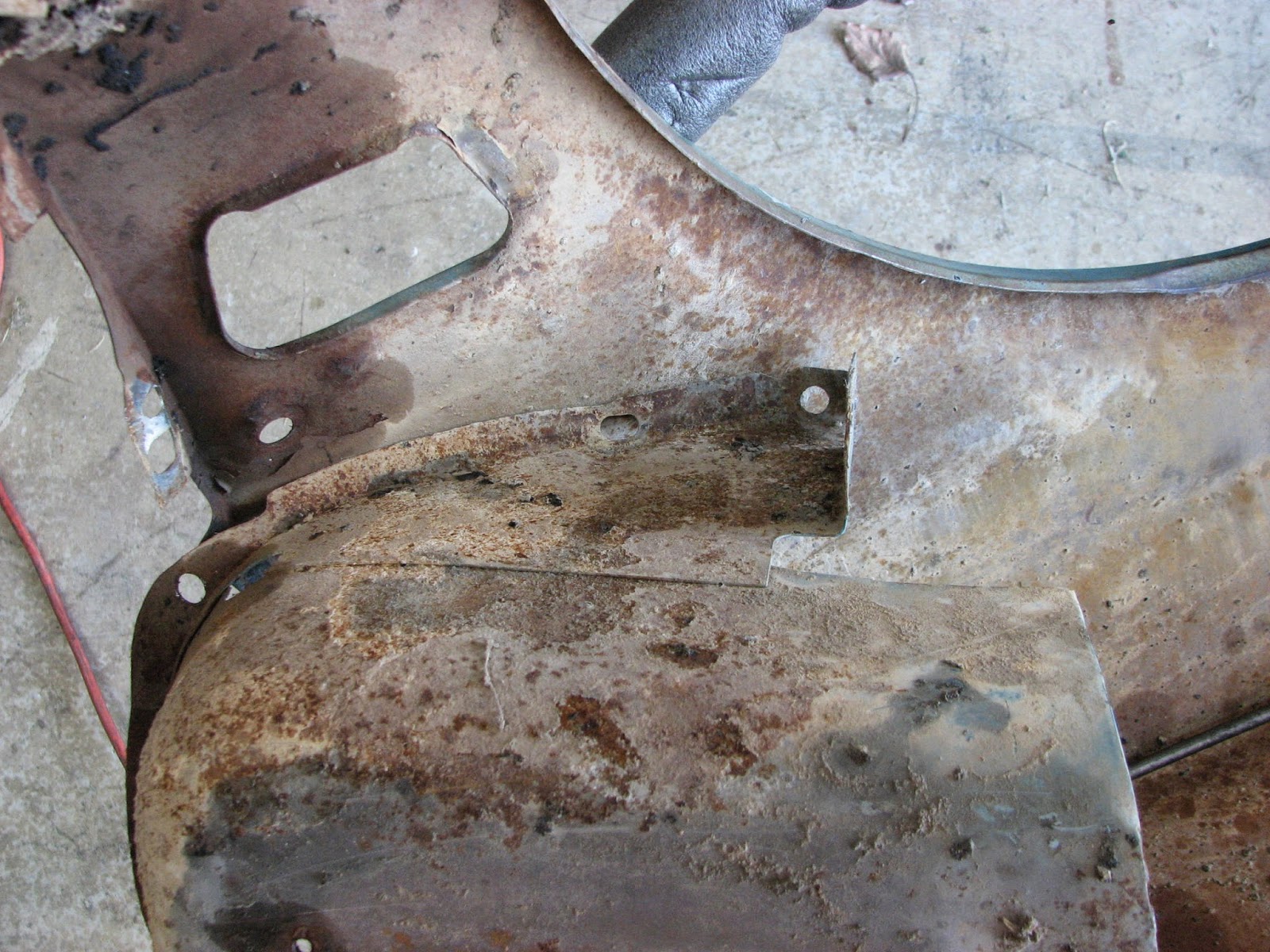 It looked pretty solid, but I needed to get it to bare metal to make sure that it's OK.  I took it outside and connected up the blaster and went at it.  In just a 5 minutes, I had a clean headlight bucket support.  Not too bad! 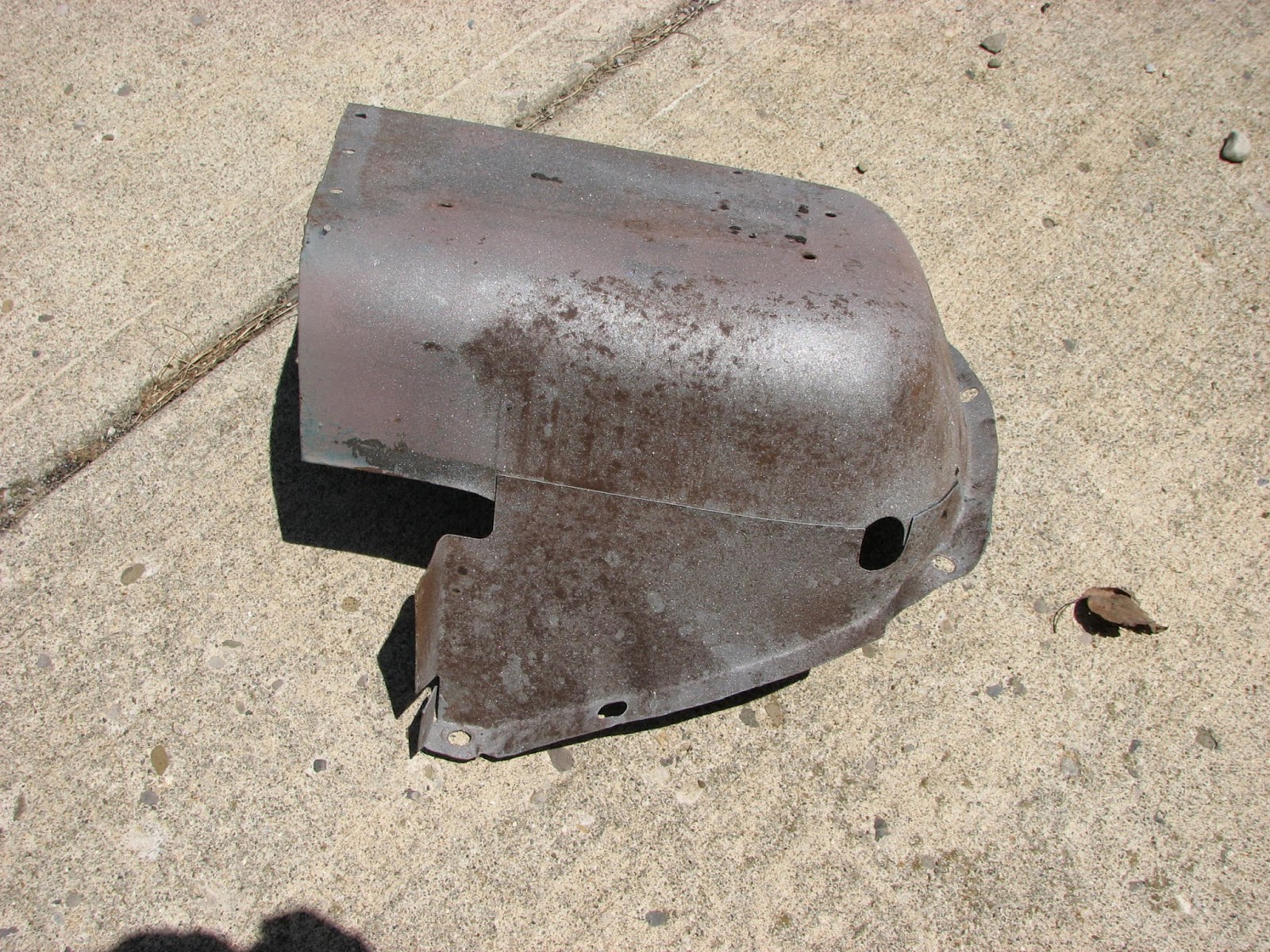 It looks good from all angles... 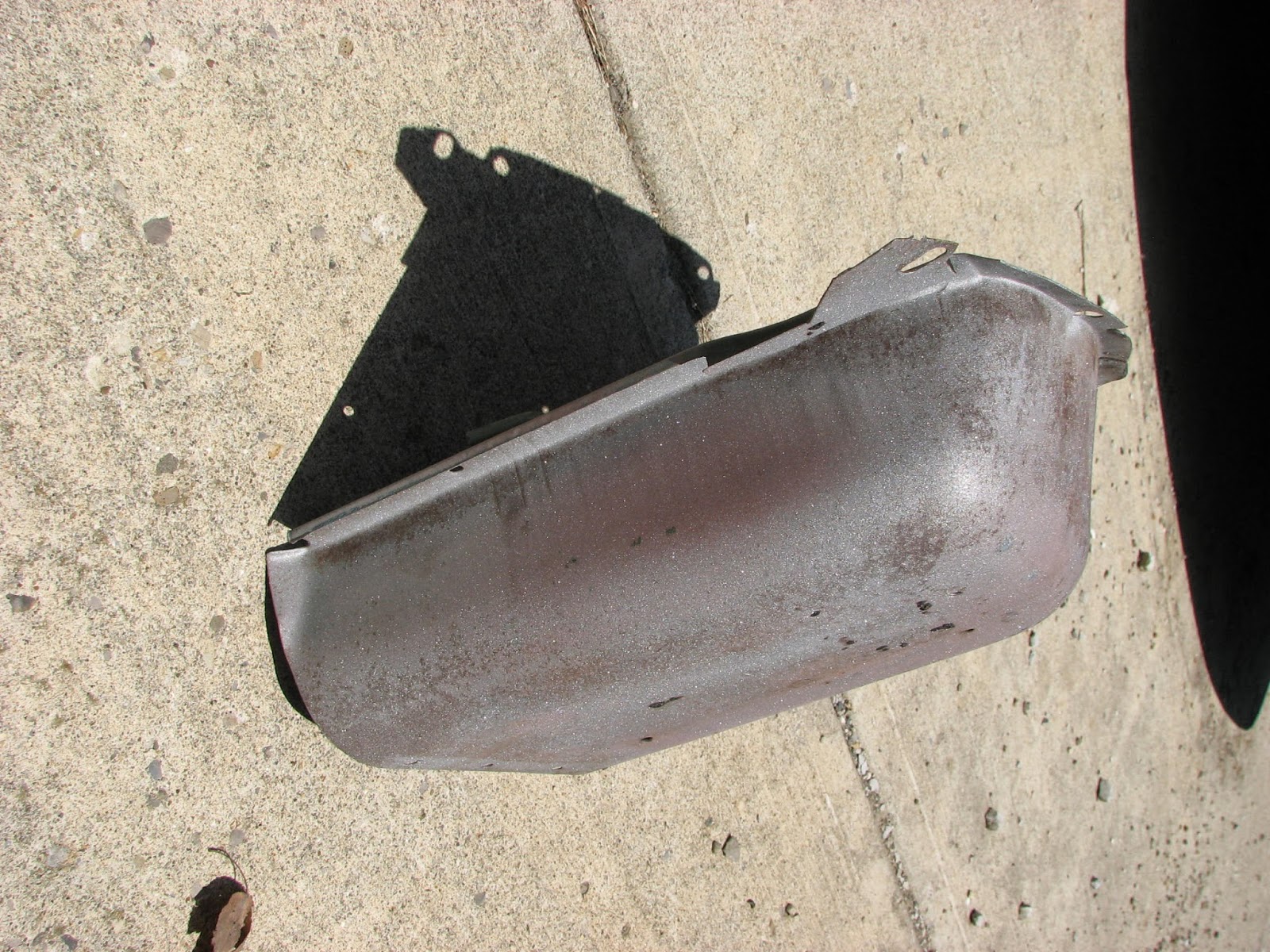 Not one pinhole.  All solid with no rust!!!   Another big Yay! 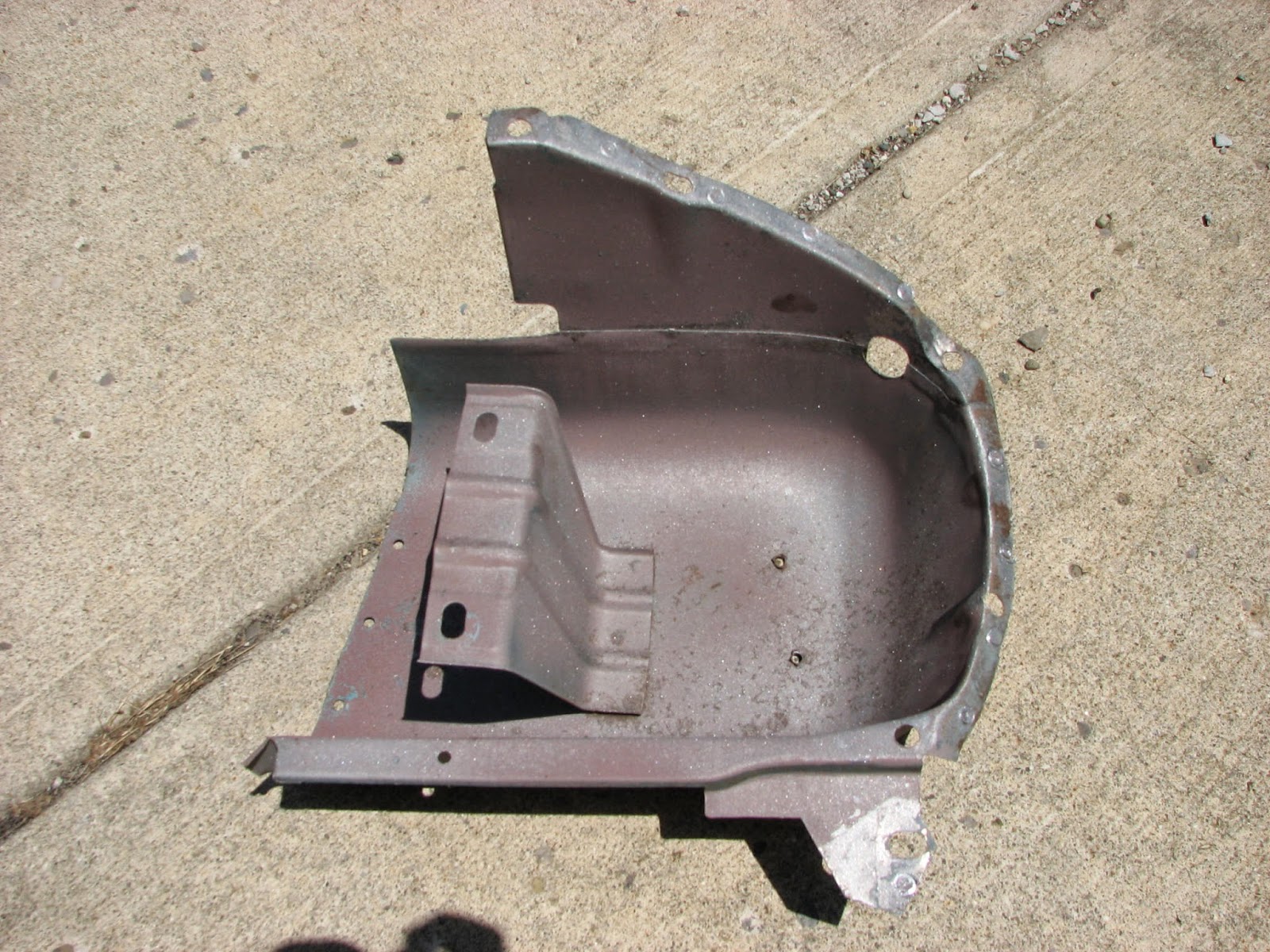 With this well cleaned part and a quick wipe down, I brushed on a coat of Zero Rust to cover the whole thing since there will be two sides that can't be adequately painted once installed in the fender. 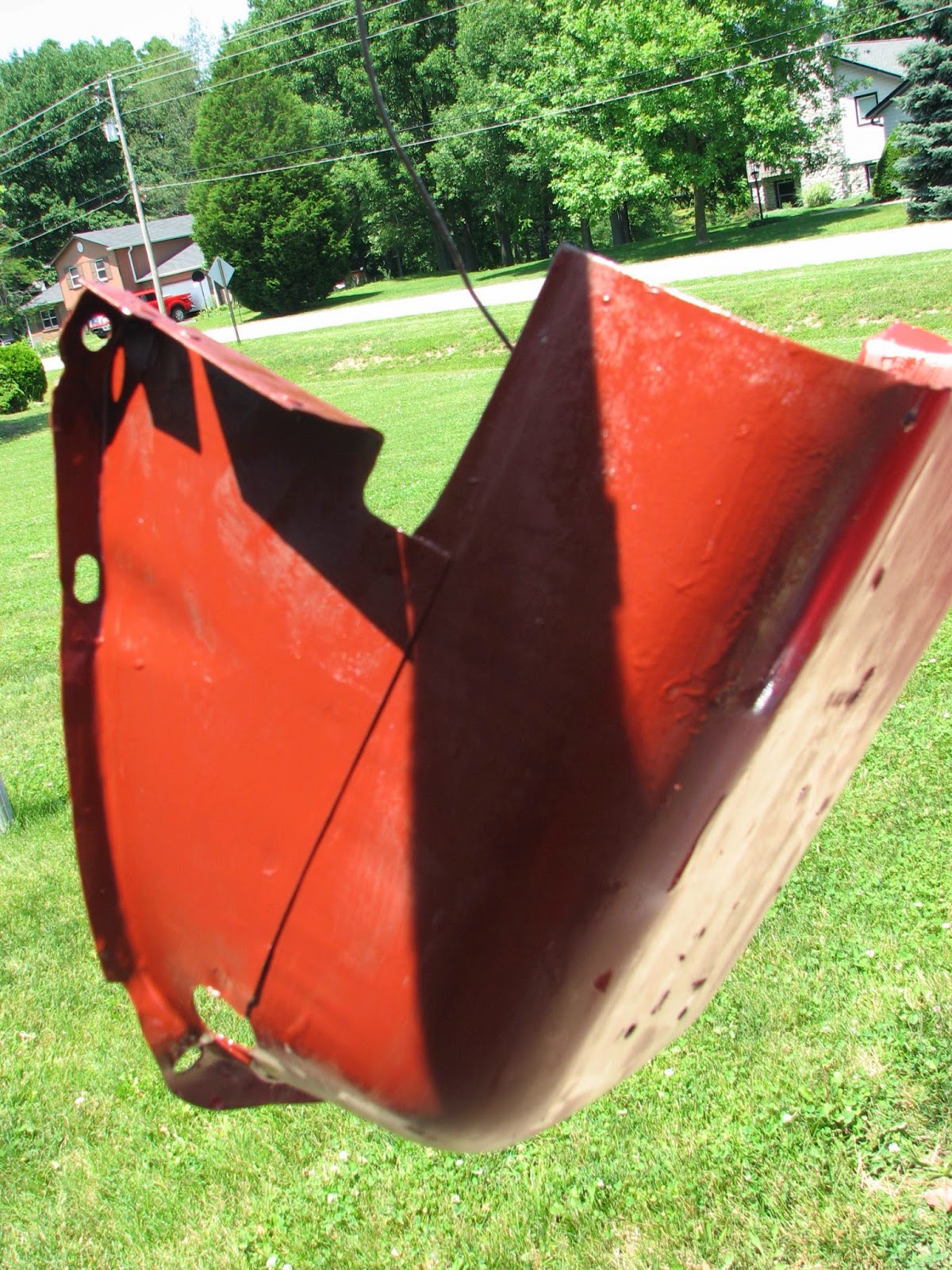 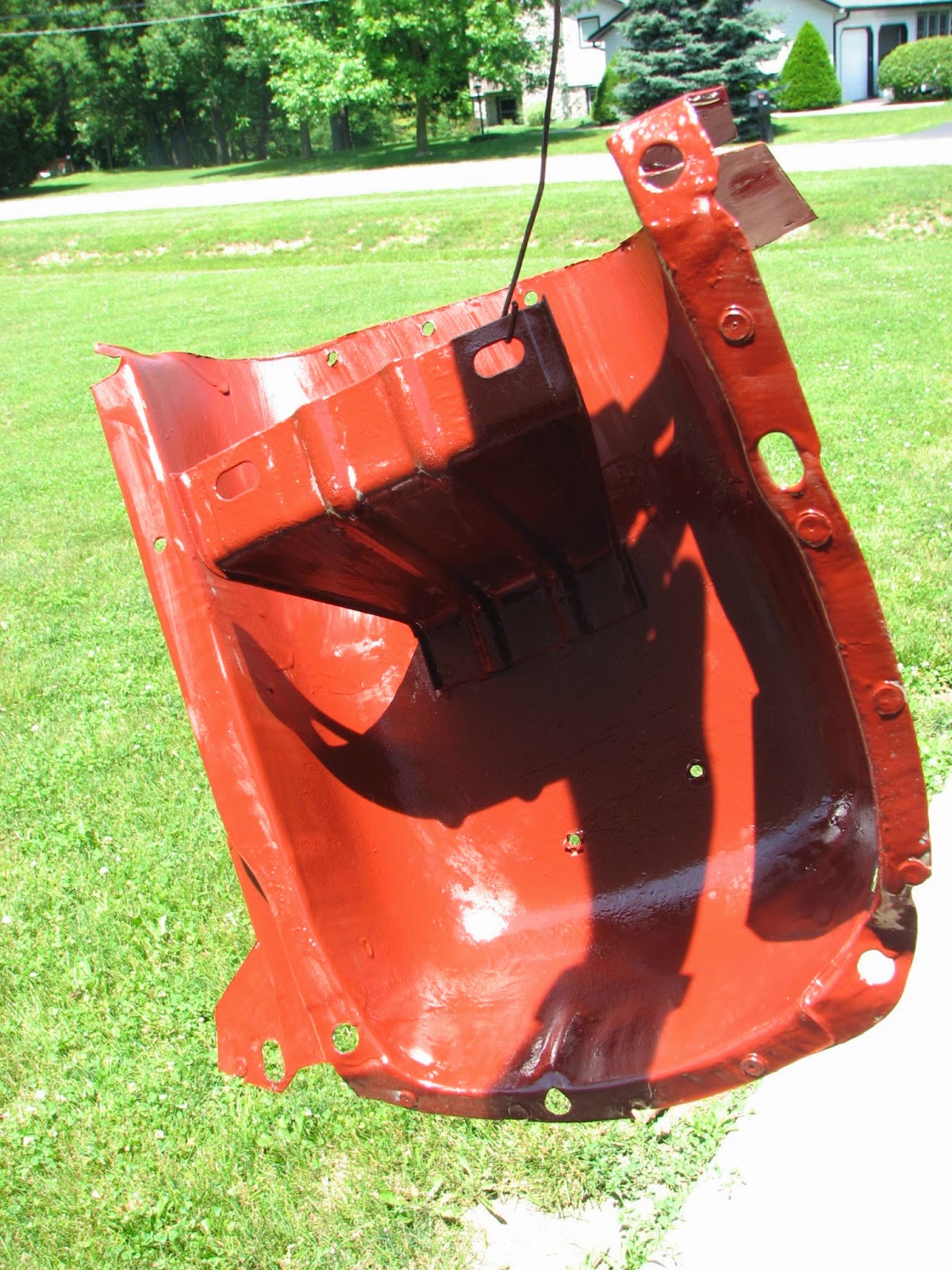 While the replacement bucket was drying outside, I got out the fender with the rusty headlight bucket and drilled out the spot welds in it.  Out with the old... 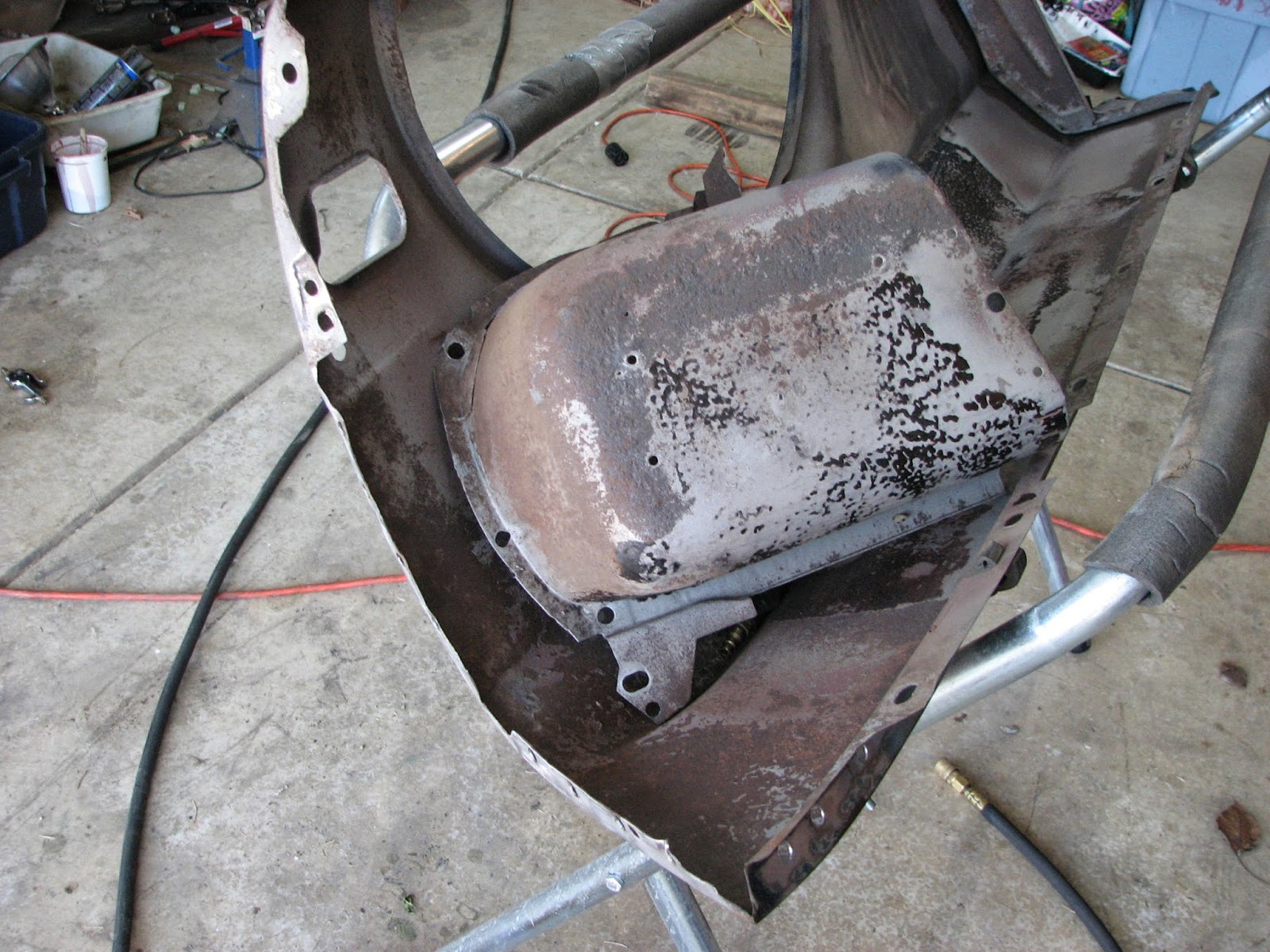 ...and it's ready for the new painted bucket... 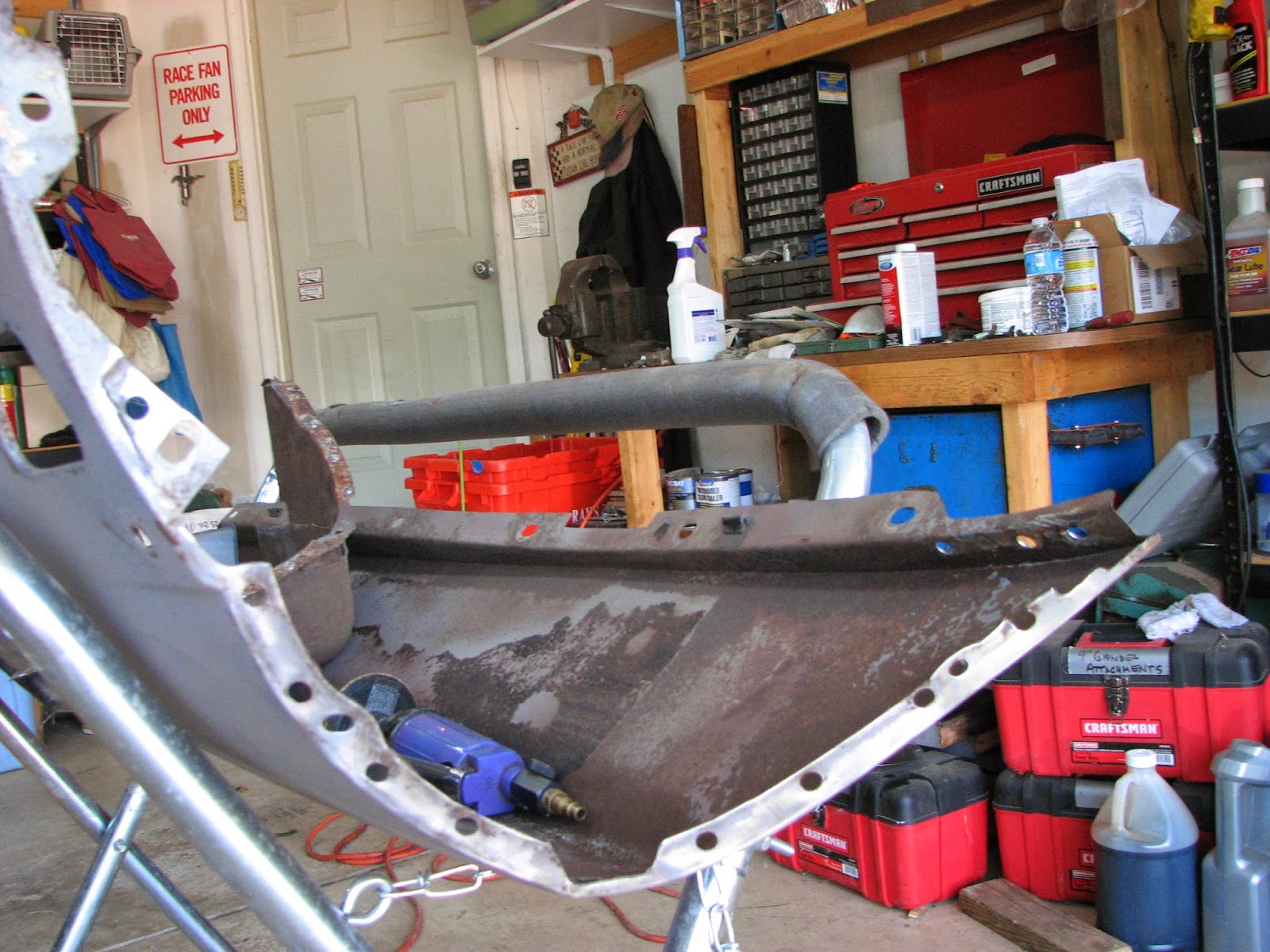 I had to pause at this point to get cleaned up for a high school graduation party for one of the kids from our church youth group.  He's heading to L.A. to attend the Los Angeles Film School.  He's already got a part-time job at Sony Studios.   So I expect to see his name in a movie credits in the not to distant future.

Speaking of future, mine will be more clear after I get back from Edmonton.  Can you say "Teaser?"