With my trip north of the border behind me and my wife in Florida on business, that leaves me with a window of time this afternoon to have at the right front fender on the fastback...or at least to start to put a dent in the repair--no pun intended...well, maybe a little.

Since the headlight support bucket had been removed, I wanted to take some rust preventative measures before installing it.  Getting paint back in the recesses would be impossible with the bucket in place.  I got the Zero-Rust out, gave it a good hard shake, and then used a foam brush to cover the area.  It doesn't have to look pretty--just covered and protected. 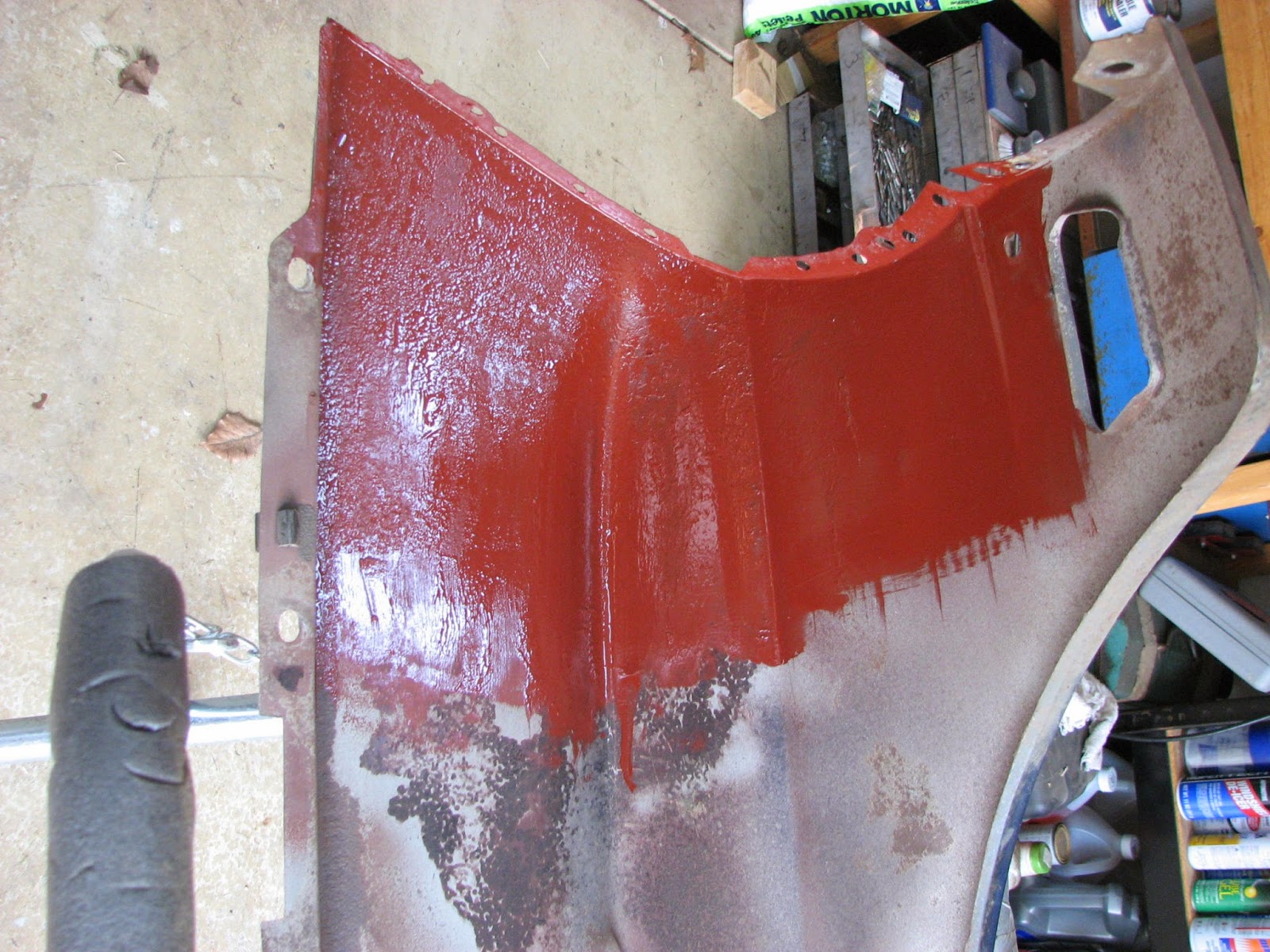 The rocker panel trim clip had to be removed since it would potentially be in the way of the cut to remove the rust.  Drilling out the 2 rivets proved easy enough. 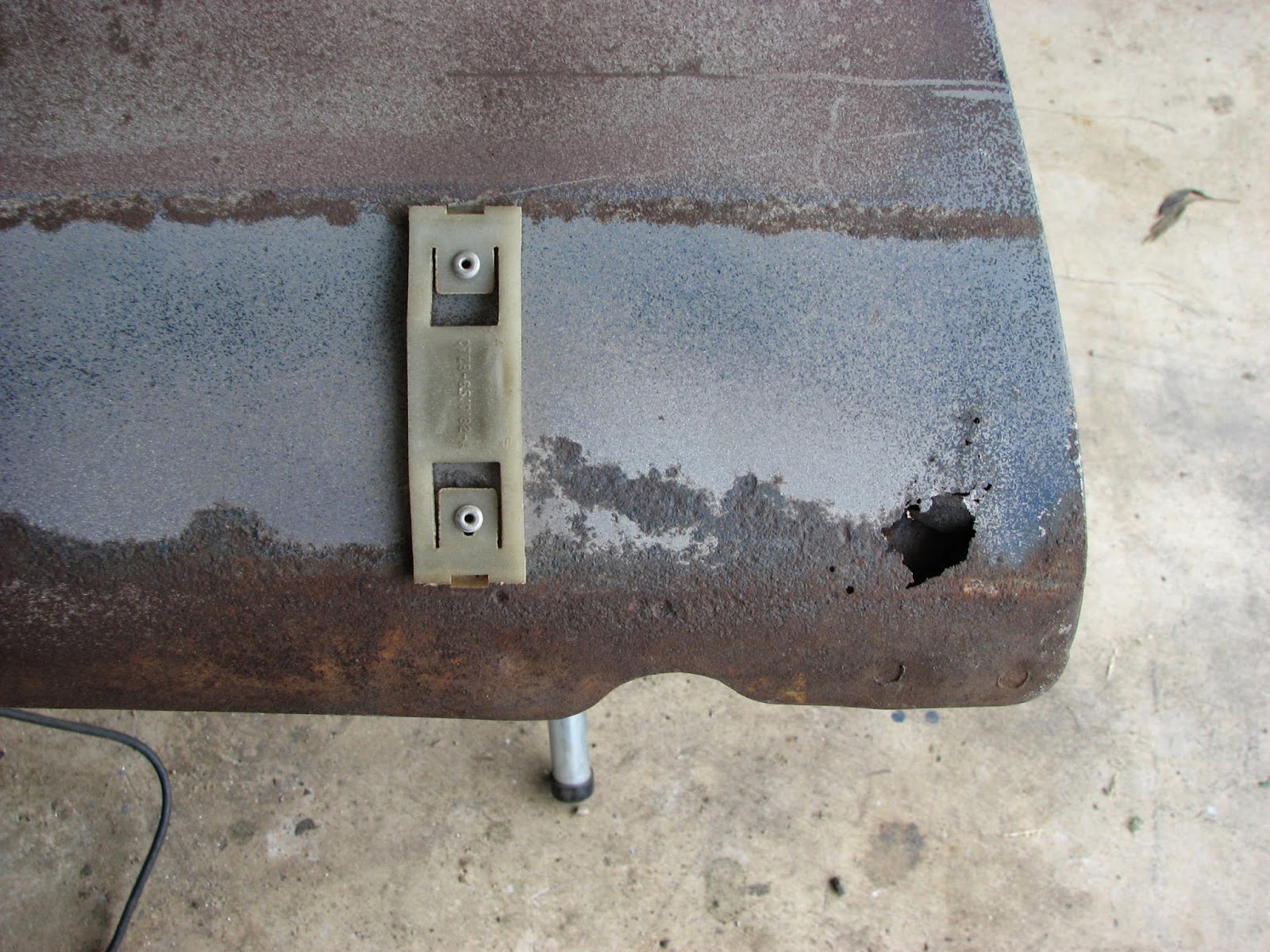 The next step was to cut the outside skin of the fender.  This is a little bit of a crap shoot to determine if all the rust is actually removed.  So I started with this area outlined with blue tape as the initial section to remove. 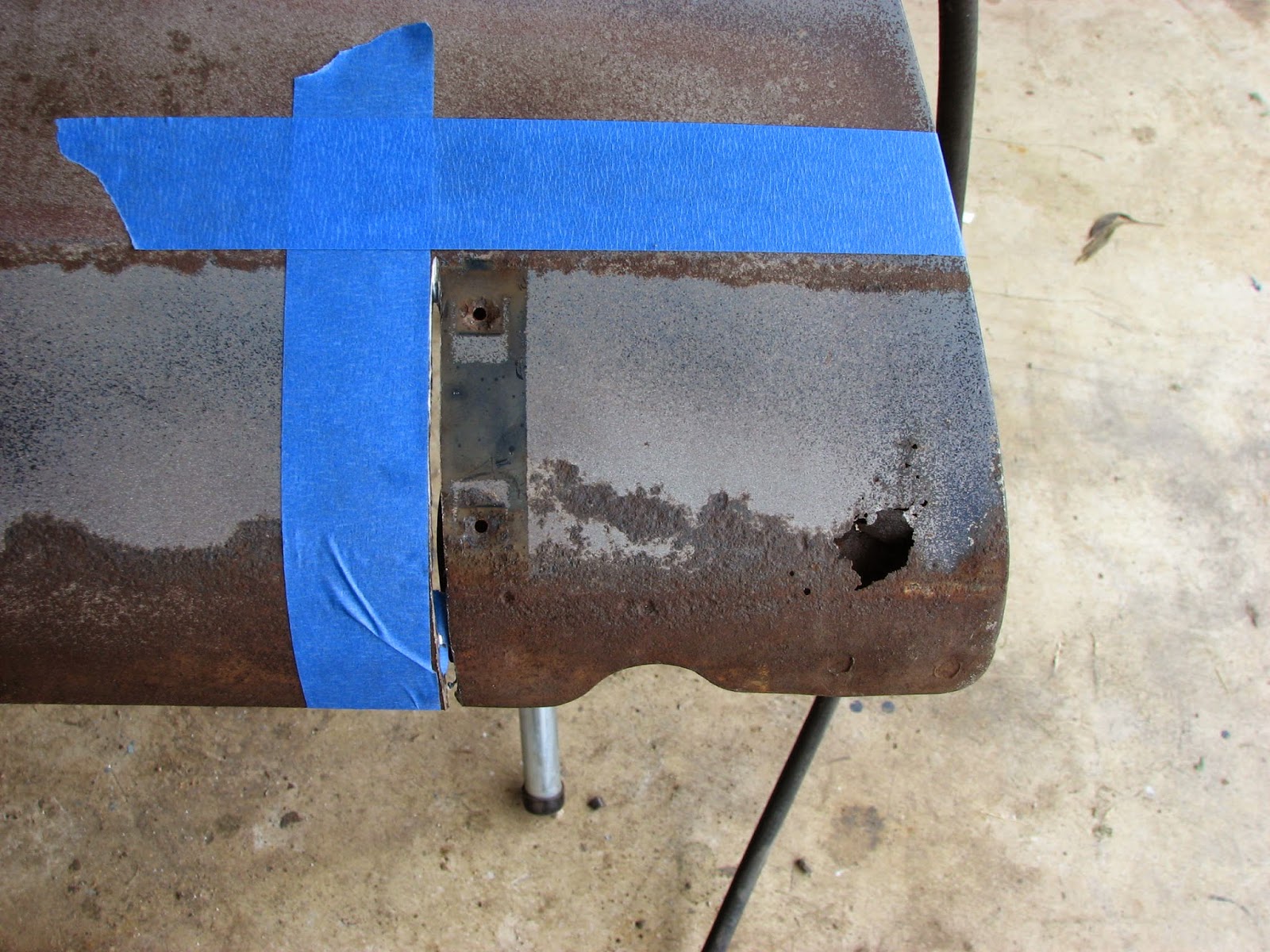 After making the initial cut, I realized that there were a couple of spot welds that had to be cut that attached the outer fender skin to the structural support.  Those were cut with the handy Blair spot weld cutter. 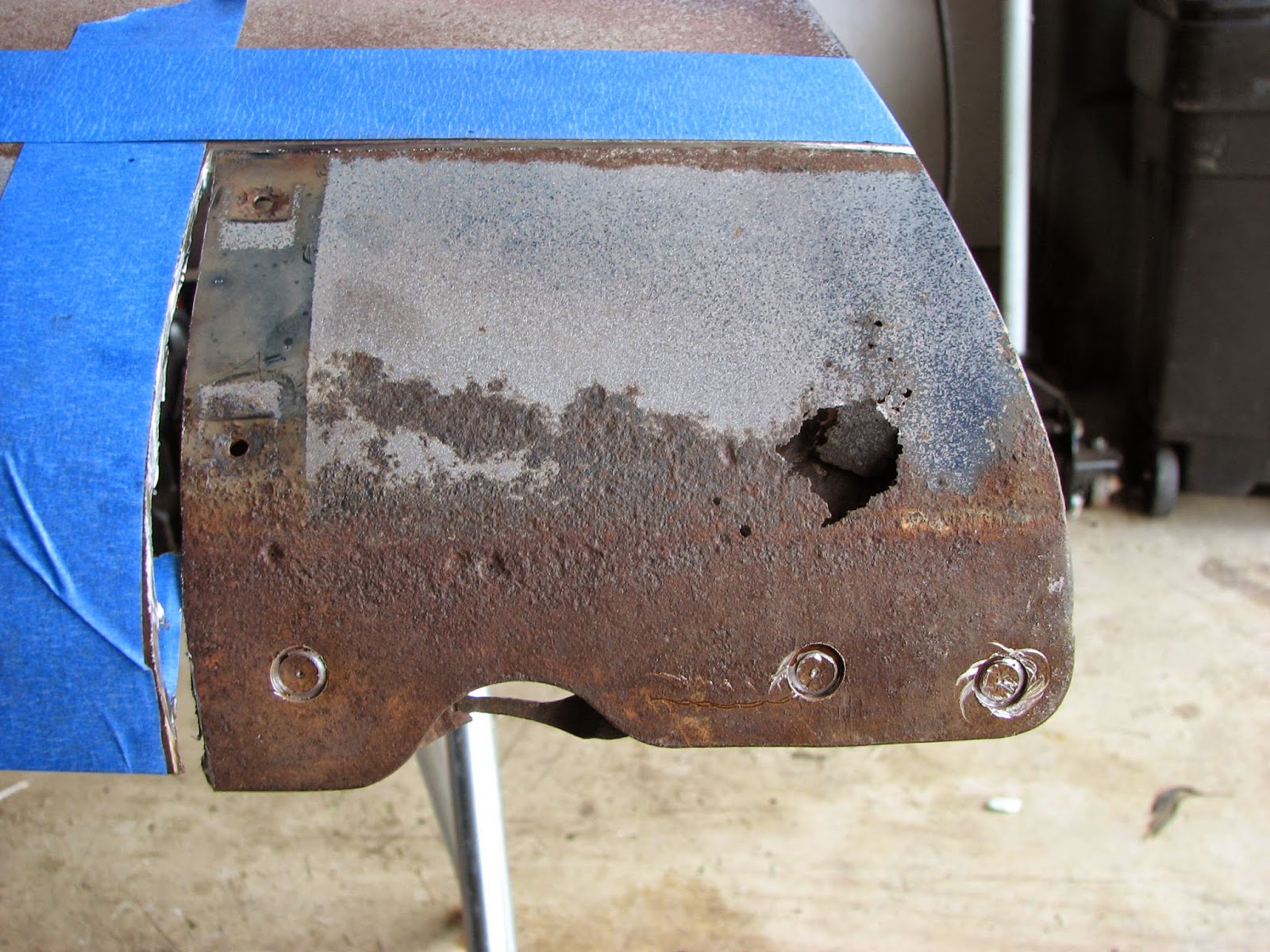 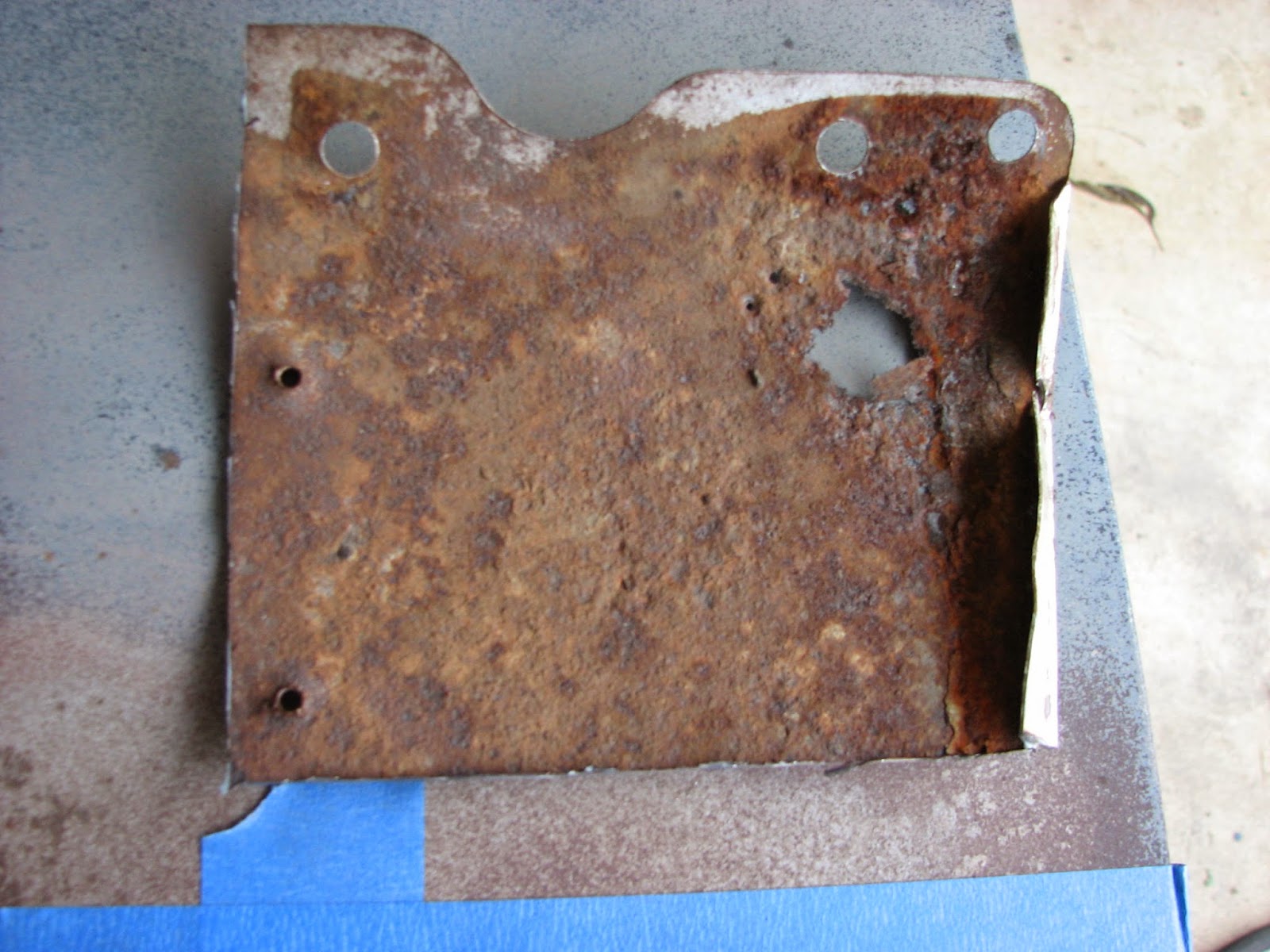 Now that the outer skin is out of the way, the inner structure condition showed that it was pretty rusty.  Interestingly enough there are signs of the galvanized coating on the support. 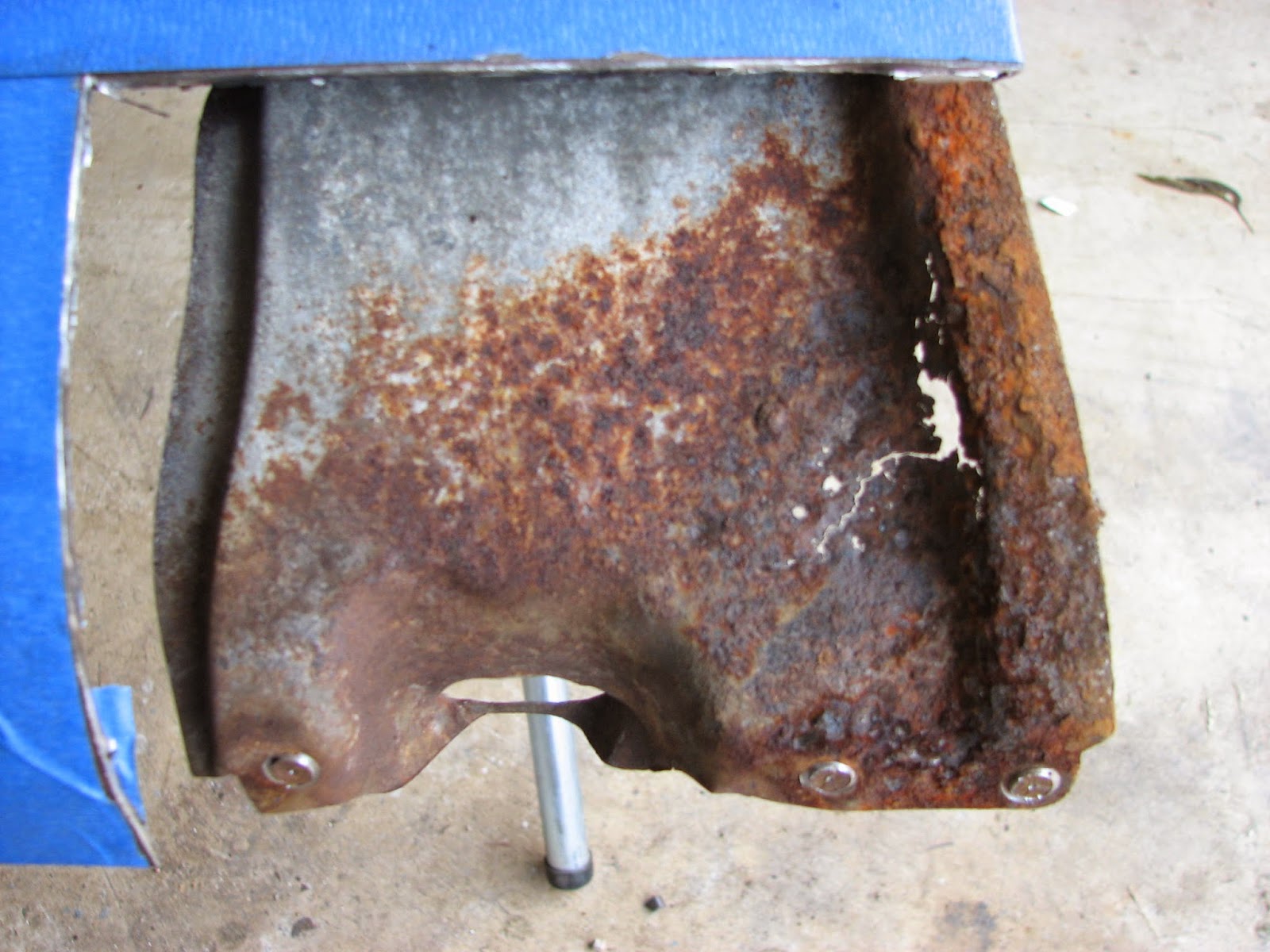 I paused on this fender to go to the donor fender so that I could cut out a piece bigger than the section removed from the fender I'm going to use.  The 4-1/2" grinder with the stripping disc cleaned up the flange to find the spot weld that needed to be removed. 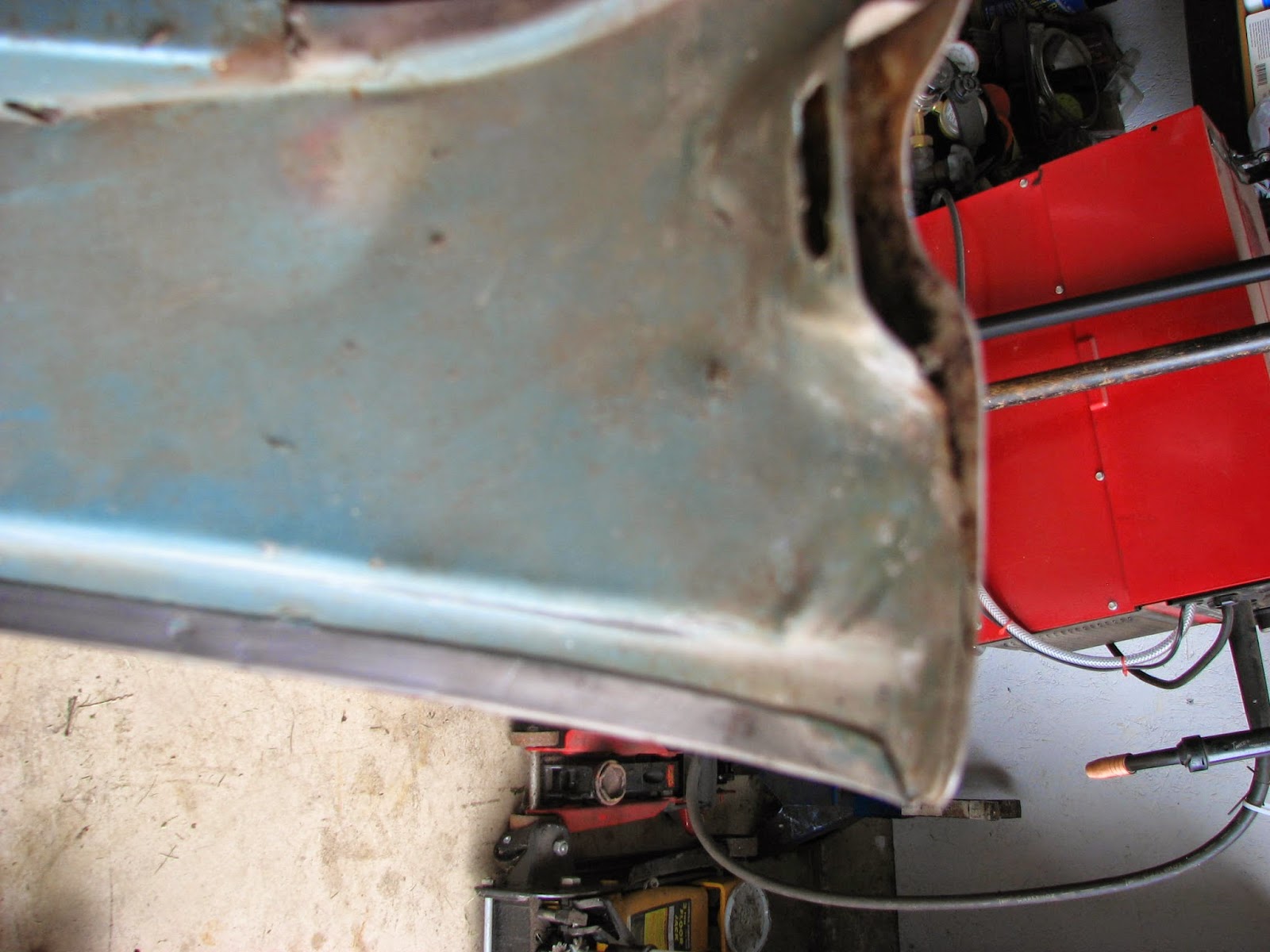 I flipped the fender over and used the stripping disc to clean the surface.  I discovered there was a layer of filler that was much thicker than originally thought.  Bugger!  I don't even think they pulled the fender off for the repair.  Just slather on the bondo and hope for the best.  This will definitely take some serious massaging before welding it into the other fender...a lot of massaging!!!! 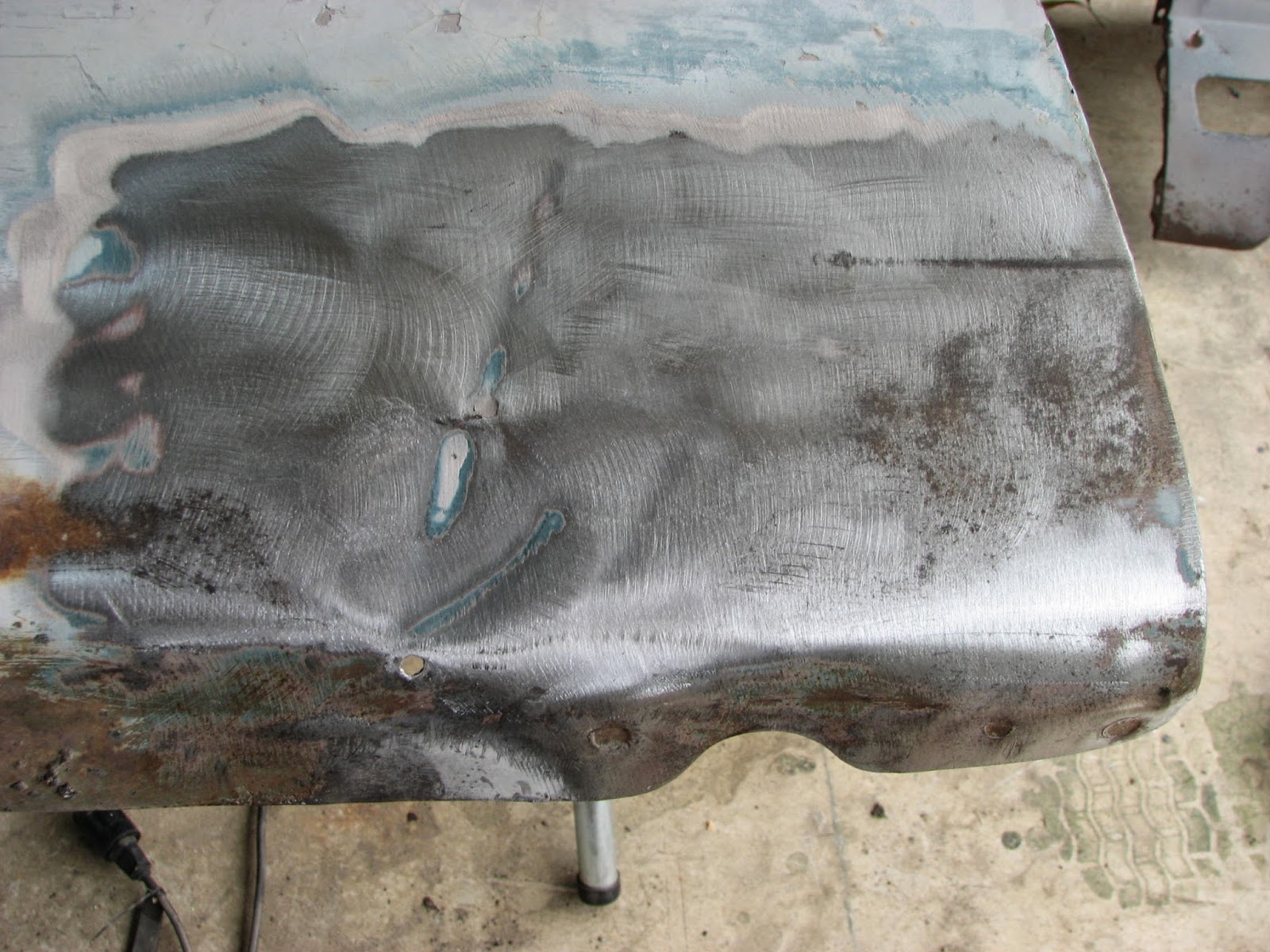 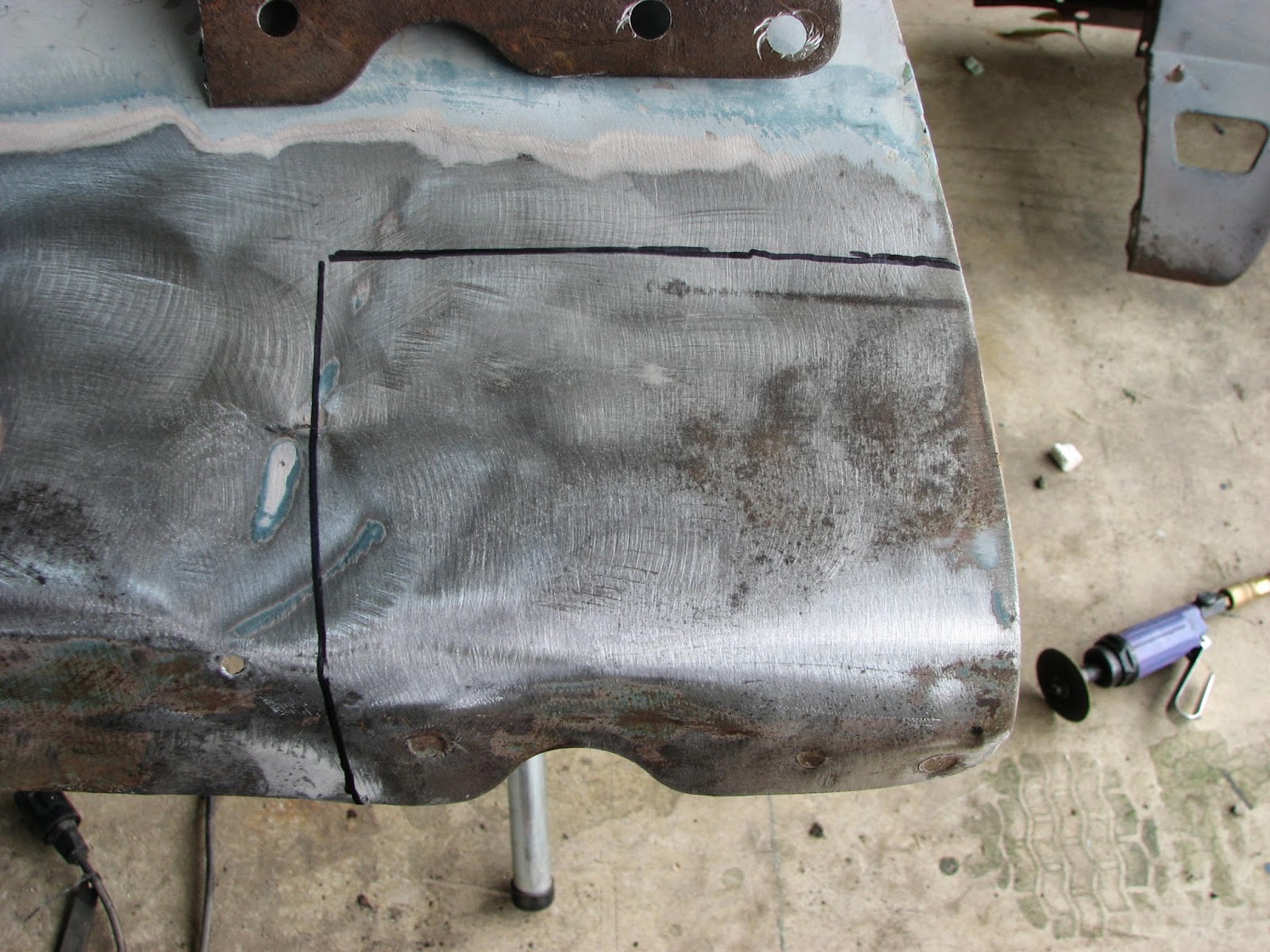 I flipped the donor fender over and cut out the spot weld in the outer skin flange on the inside of the fender. 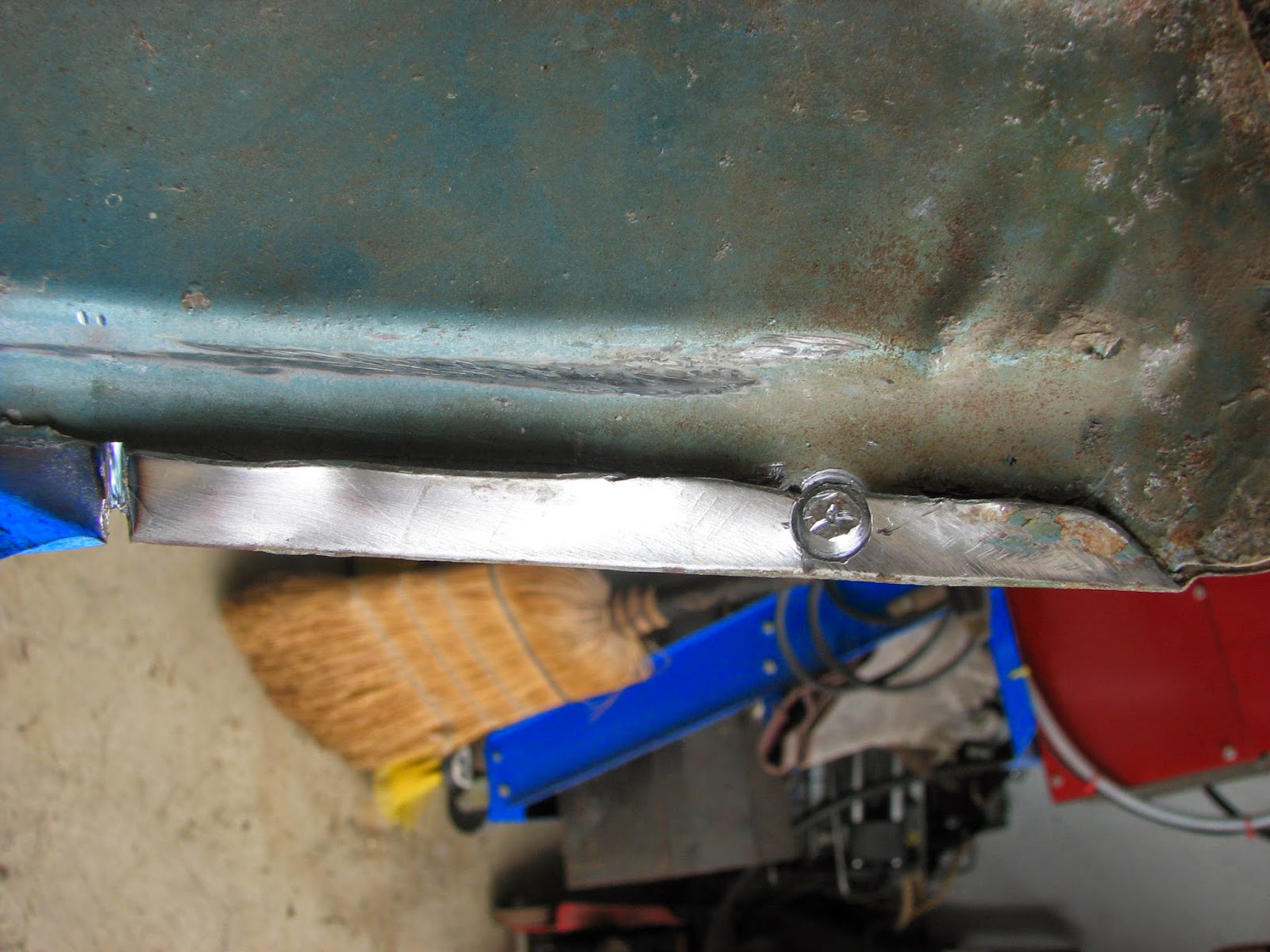 The bottom of the donor fender also had 3 spot welds that required cutting out.  Easy peasy! 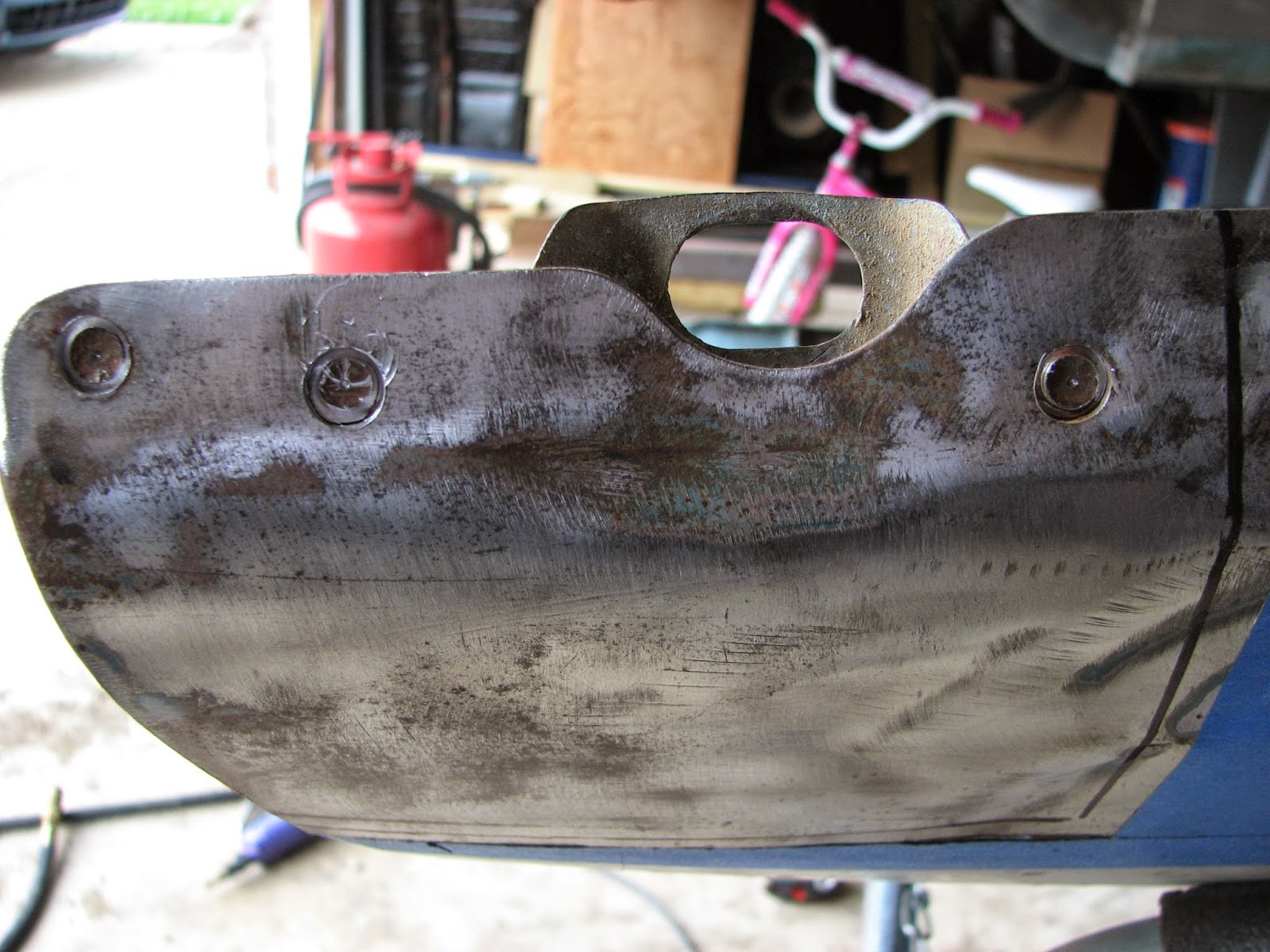 Before cutting out the patch from the donor fender, I put tape 1/2" on the outside of the traced edge to be sure I had enough material left to work with if needed.   Notice something missing?  If you're really observant, there are no holes for the rocker panel trim clip.  Hmmmm.... 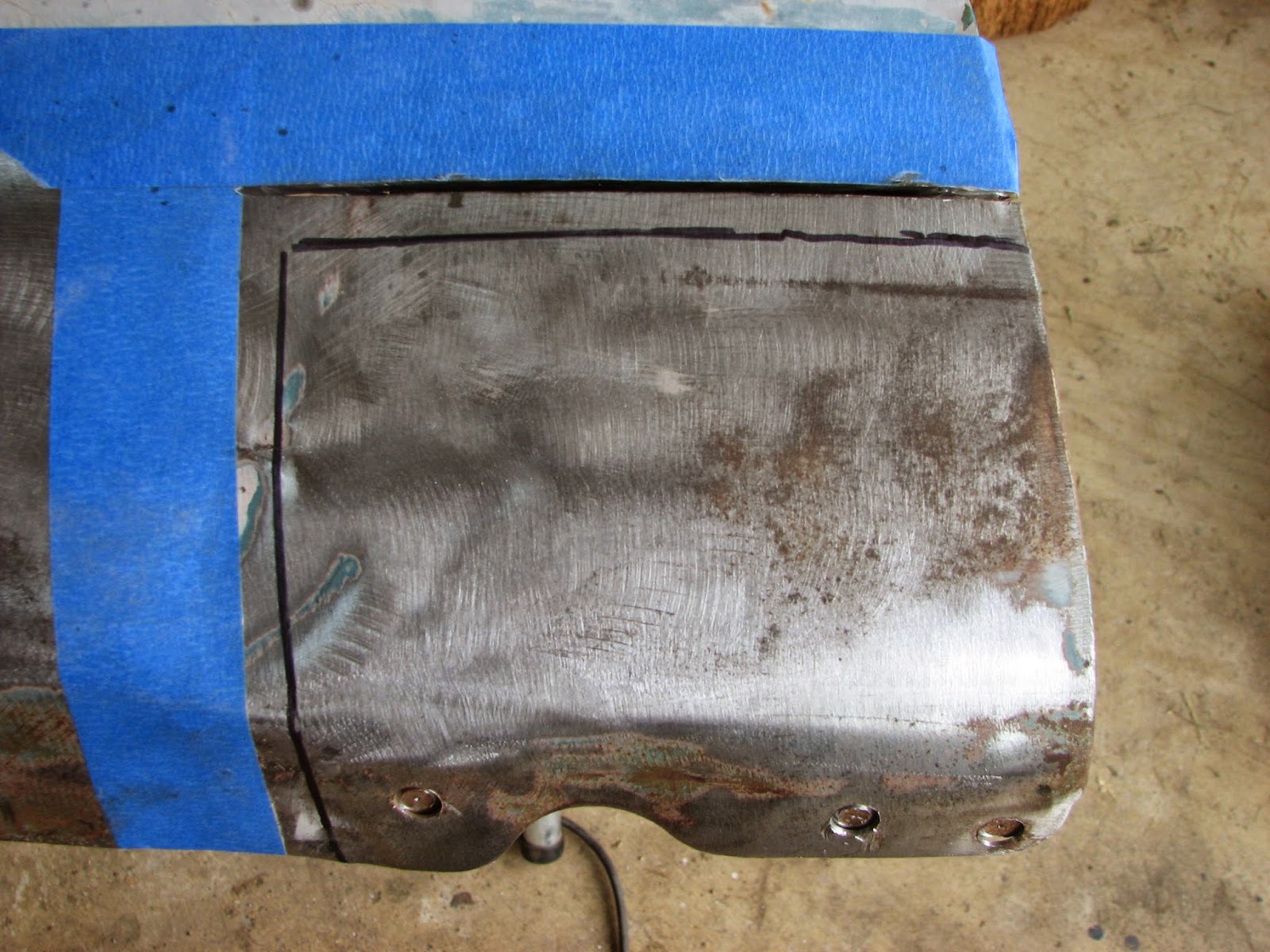 This is the donor piece after cutting it out of the fender.  I did massage some of the dents and dings out of it, but it's going to take more work.  I may wait until I get it welded in the usable fender.  then again, I'll have to do it before since the support brace will prevent doing any hammer and dolly work on it once installed.  It will be challenging since it's a small part that will be difficult to support. 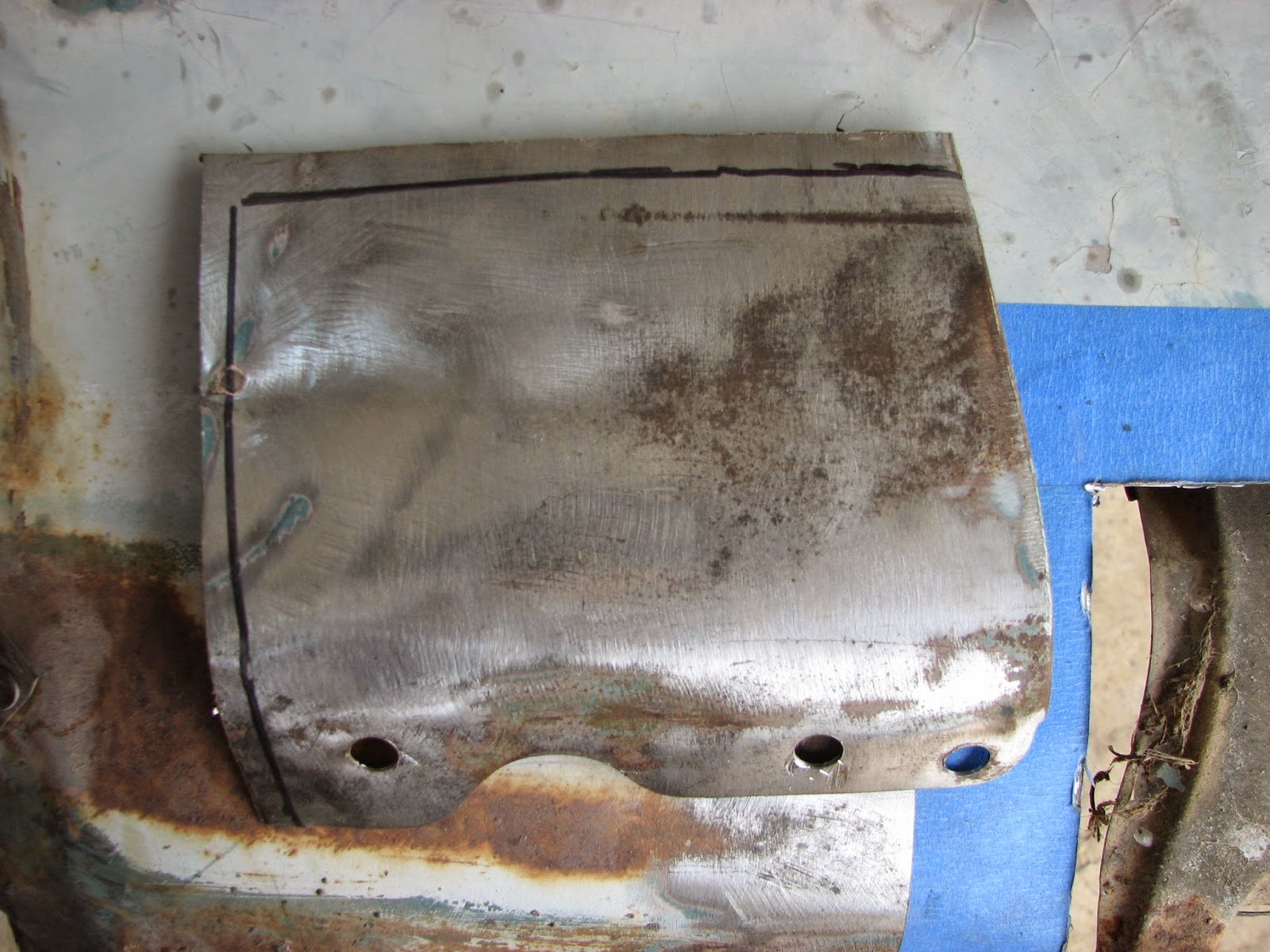 Here is a view of the inner structure of the donor fender.  The galvanized surface has obviously worn off allowing rust to form.  At least it's on the surface and not rusted through. 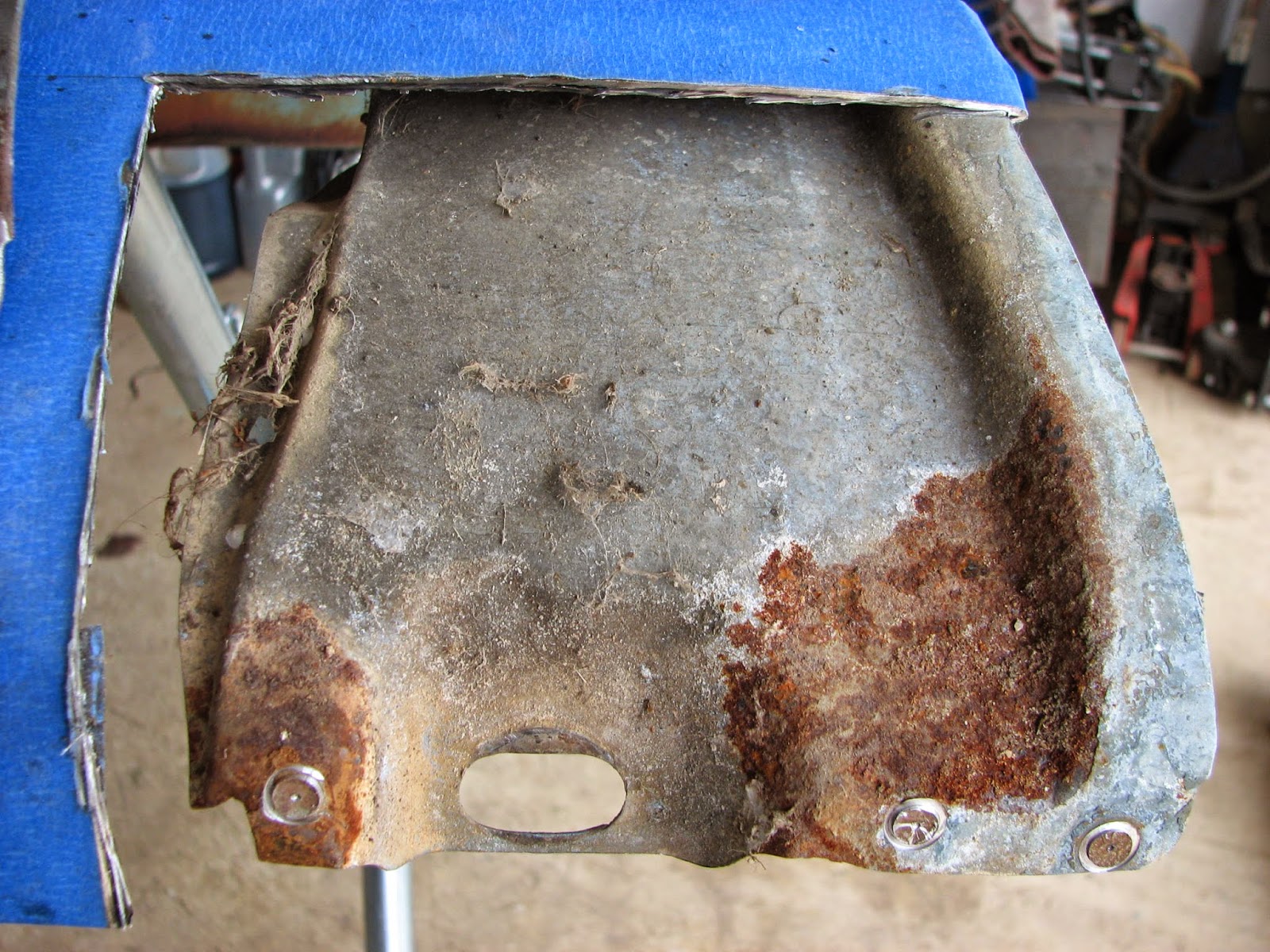 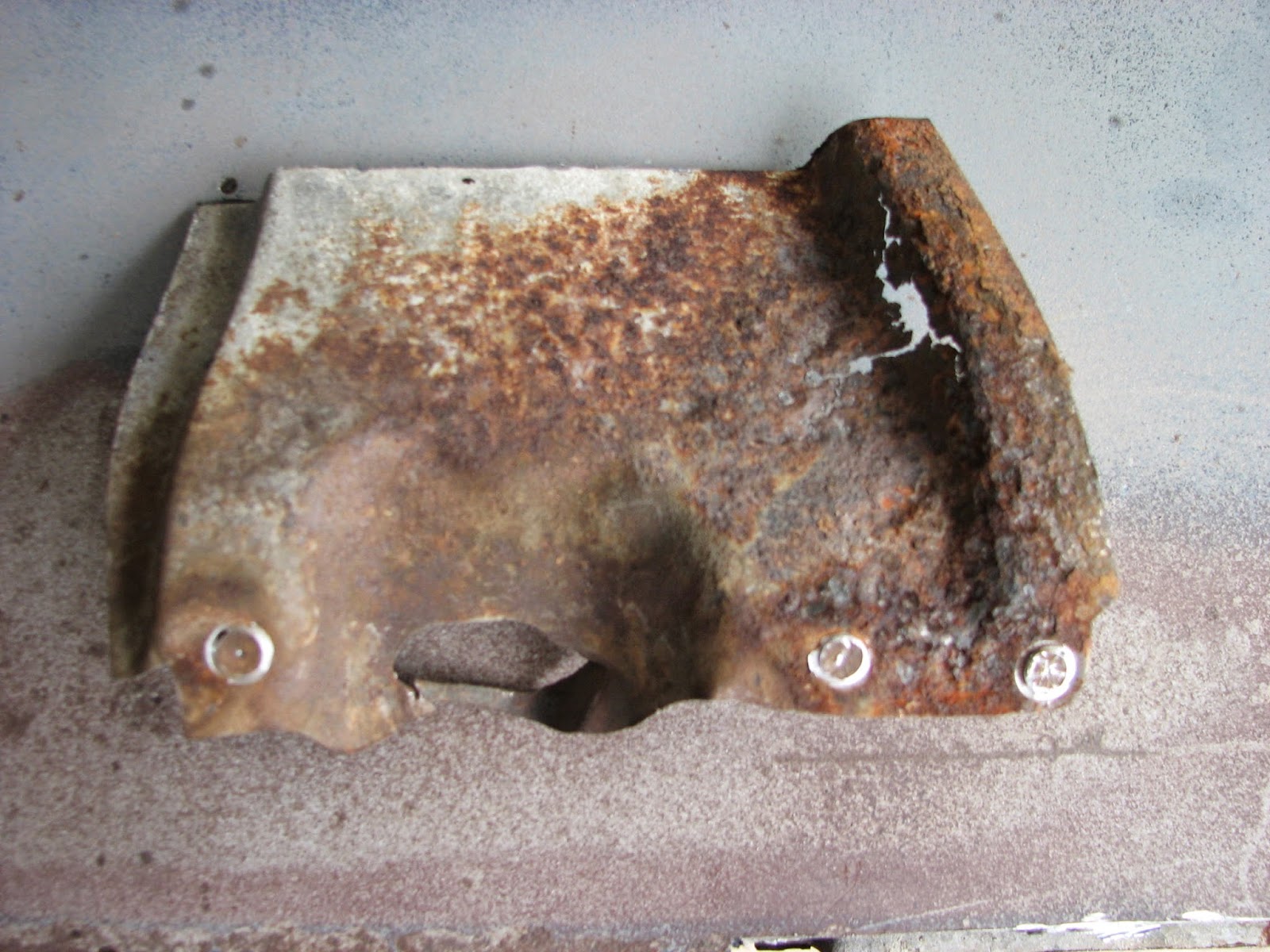 The rusted support from the fender being repaired is on the left.  The donor piece is on the right. 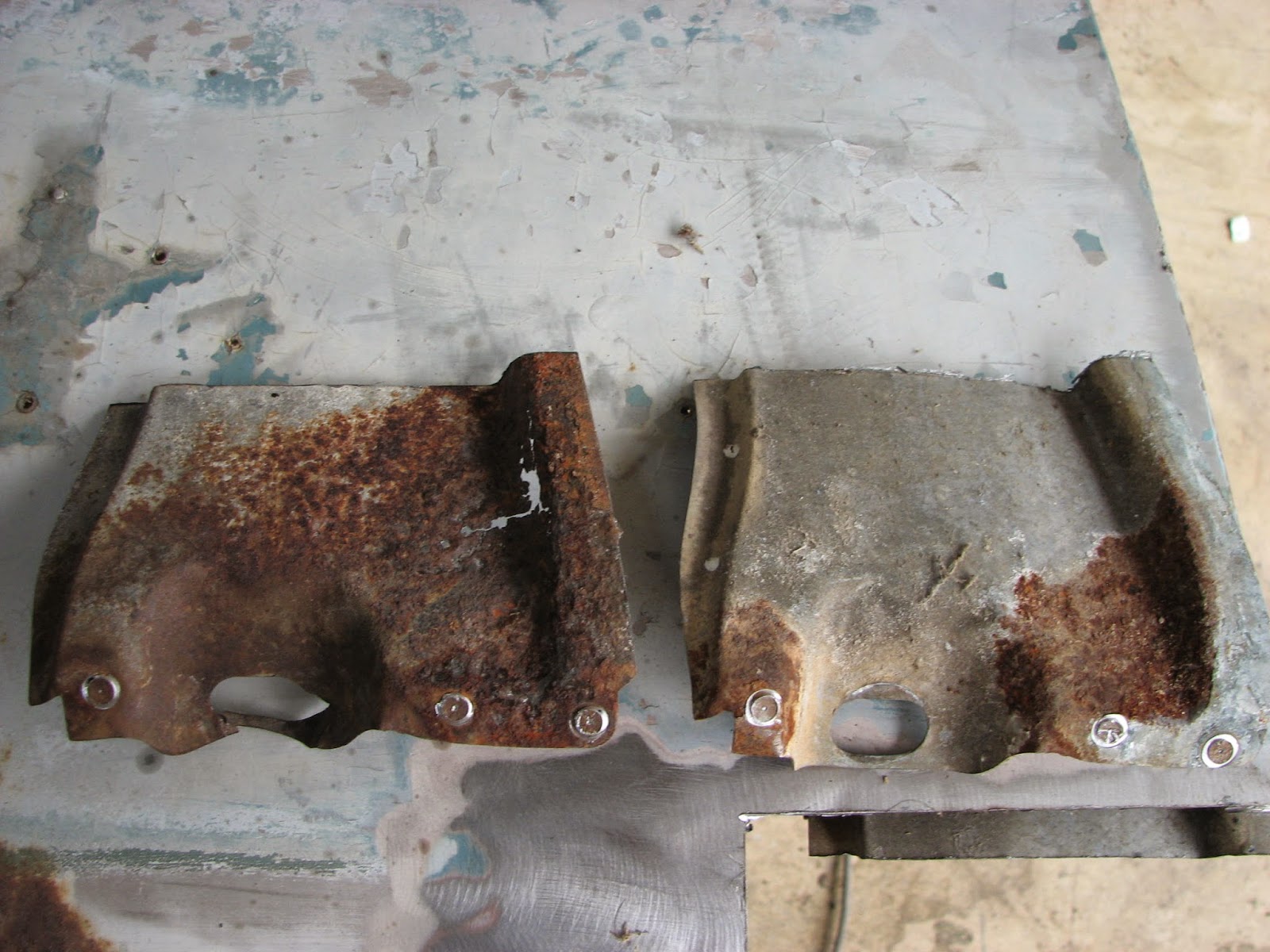 The fender being repaired is ready for the donor parts.  The edges still need to be cleaned up and some rust preventative applied. 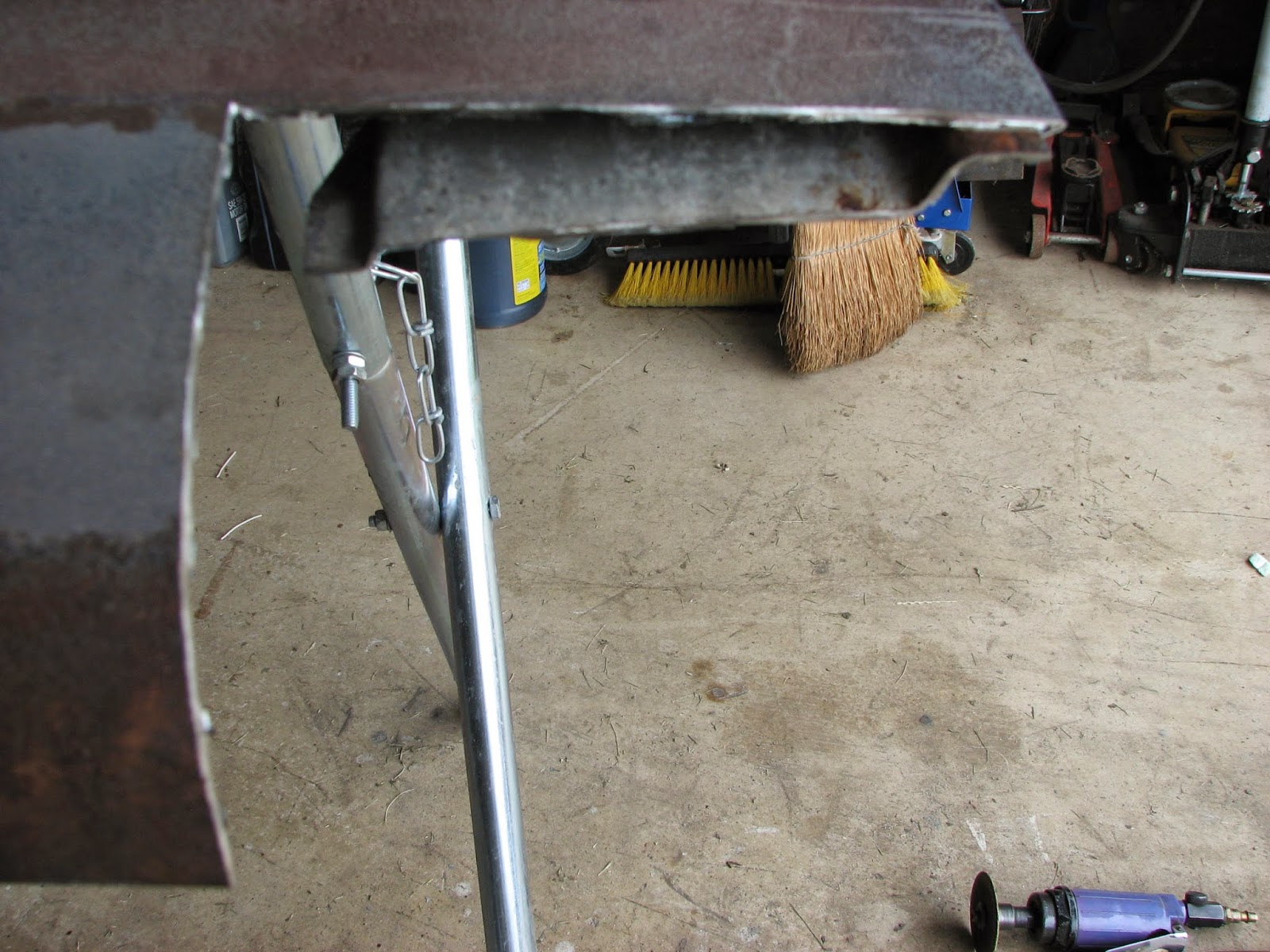 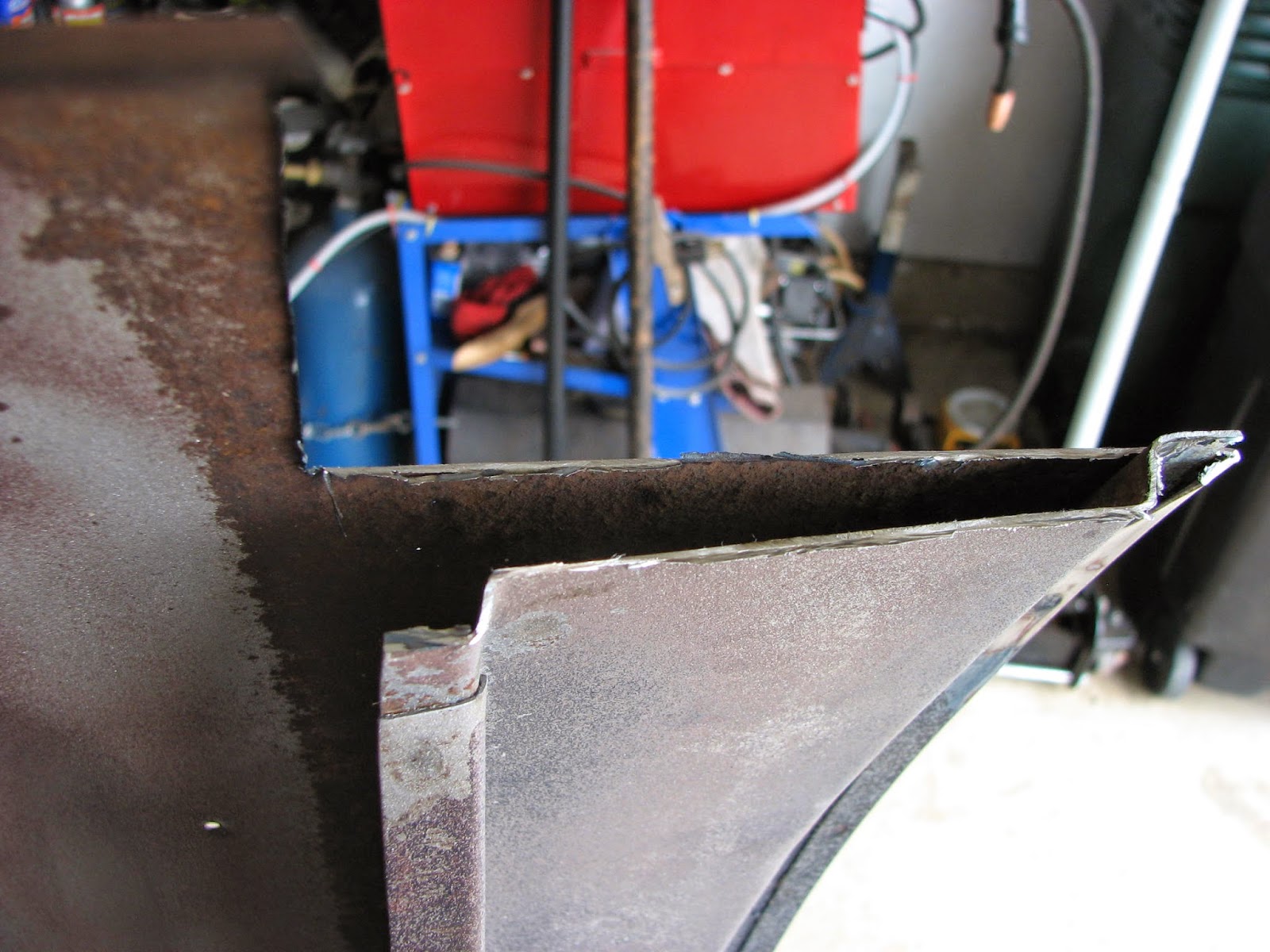 I used the rusted piece as a template to mark the donor piece in preparation for trimming to fit.  This will be a slow process as I'll trim off a 1/32" and check the fit.  Repeat until it's just right. 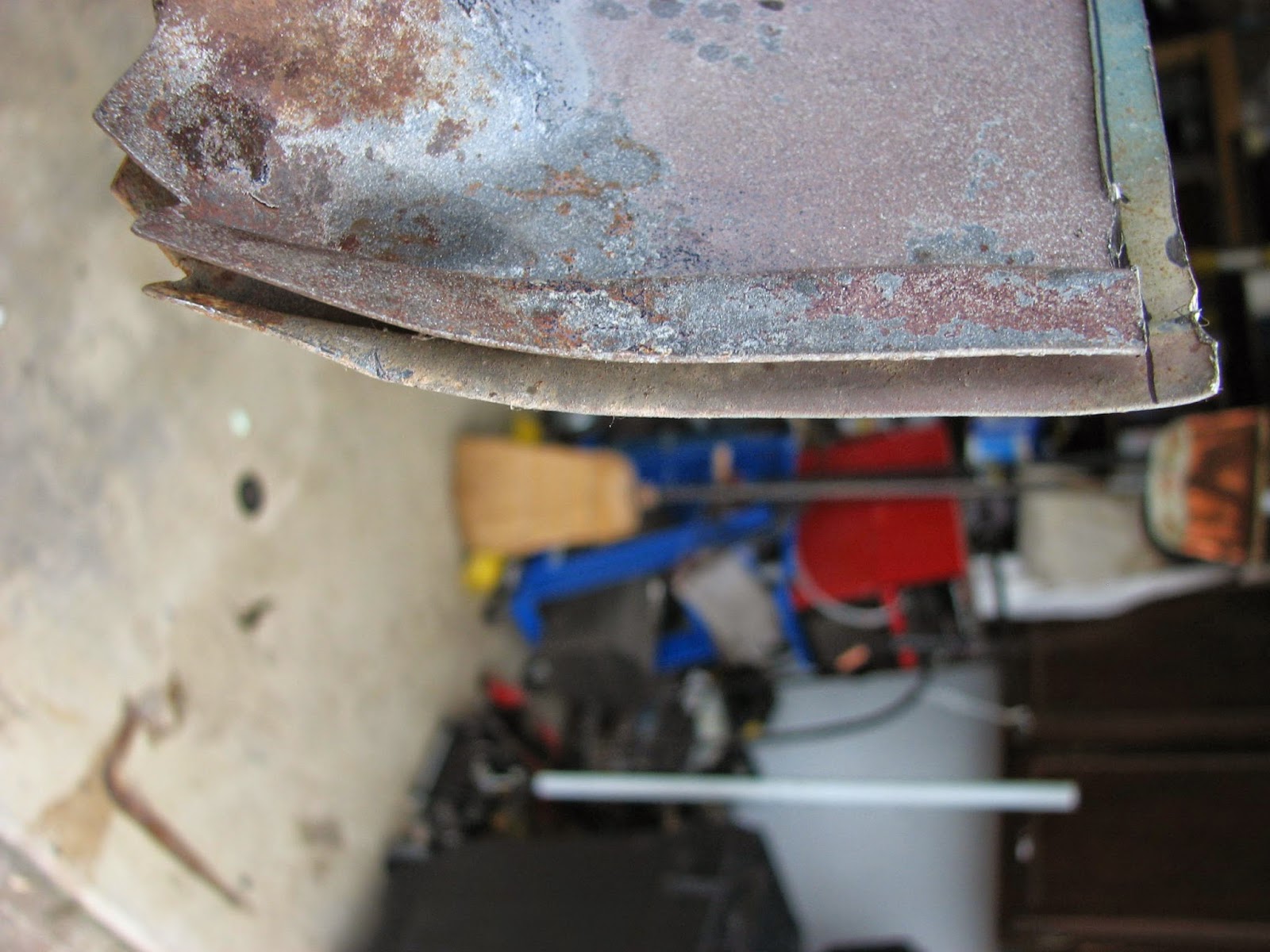 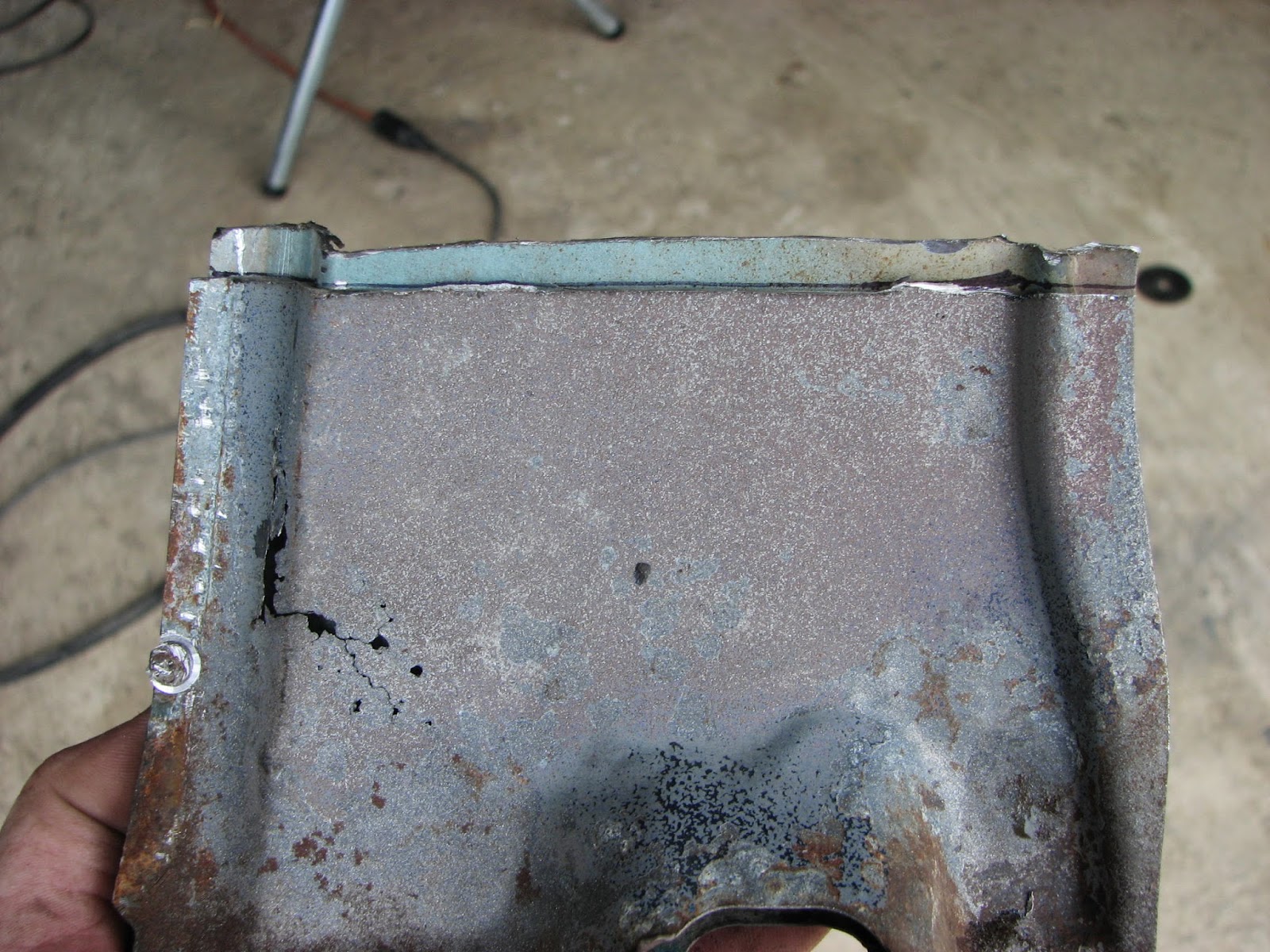 I cleaned up the donor part and sprayed Eastwood Rust converter on it.  I may however, put it in my blasting cabinet and glass bead blast it on both sides.  Then give it a coat of Zero-Rust before installing it. 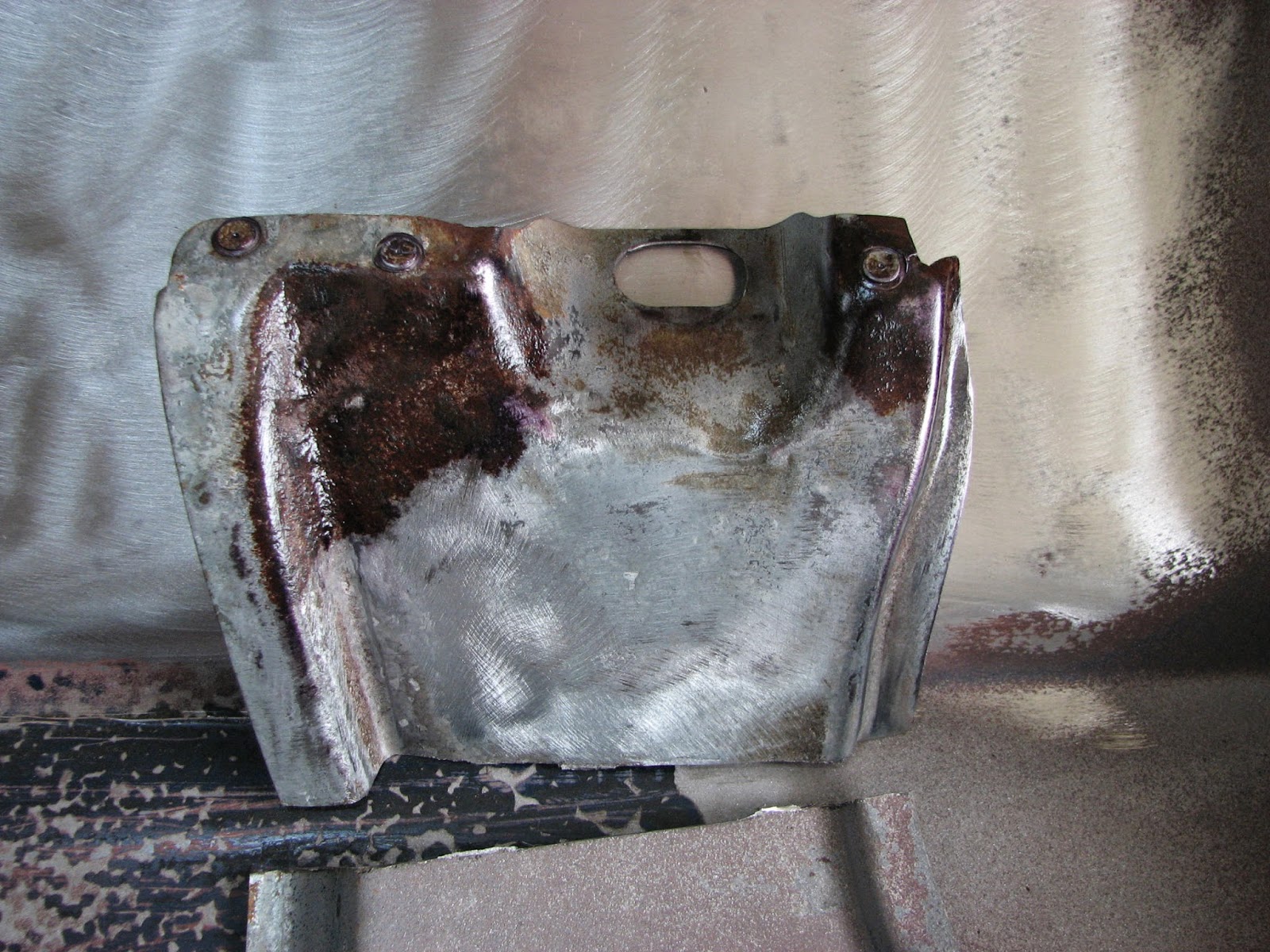 The weather started to turn really humid along with the heat.  I decided to call it quits for the day.  It wasn't huge progress, but at least I'm closer to start the rebuilding process of the fender.   When I'm done, I'm tempted to put the donor fender on eBay to see if someone wants it to use for patching another section.  If not, it will go on the pile of metal that will eventually make it to the recycle center.

Next week, I'm hoping to take a few days of vacation.  Part of it will be spent on the fastback--probably in the cooler temperatures of the morning.  The other part will be studying for my Commercial pilot license written exam.  Oh joy.  At any rate, the plan is to put forth a good hard effort on the fenders and have them done (maybe in primer!) by the time I leave for a wedding and vacation with my family in northwest Michigan, including a stop in Frankenmuth on the way for dinner at Zender's and a trip to Bronner's Christmas store.   My daughters and their families have never been there.  So it should be fun.