A Too Long of a Haiatus


It's pretty sad when I had to look at my postings to find out when I worked on the fastback the last time.  It is embarrassing to say the least.  In fact, I had given some thought to putting the entire project up for sale with the rotisserie, engines, transmissions...basically anything car or Mustang related and look for something that could be fun and collectible.   The 2006-2007 Shelby GT-H "Rent A Racers" are out there at reasonable prices.  The 2012 and 2013 Boss 302's are available as well with the Laguna Seca versions a little pricey.   But then, if I got one, it would probably sit in the garage under a car cover because I'd be afraid of putting too many miles on it.  Where is the fun in that?

Eventually reality set in along with cash flow, retirement savings, and some home improvement projects.  So the fastback will remain part of the family...for now.  But who am I kidding?  Selling it will probably not happen in my lifetime, especially since the Mustang has been lodged in my garage for almost 11 years.  Only my '97 Civic can eclipse that mark at 17 years this month.

Anyway...enough of waxing poetry or whatever you want to call it.

So...I decided that I needed to put a hold on the sealant removal on the body interior and focus on getting all the raw metalwork on the firewall, rear wheel housings, and the floors in epoxy primer.  The first step was to prepare all the weld joints for an application of "metal-to-metal" filler to make them look seamless.  Before that happens, I wanted to examine all the welds to make sure that they were sound and free of as many of the dreaded evil pinholes as possible.

With the garage heated to a comfortable 68 degrees and the car positioned with lights and welder at the ready, the evaluation began... 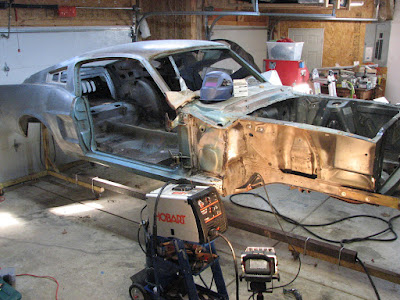 The driver's side firewall looked good.  No light shining through.  Good news.  The passenger side firewall did not fare as good.  A half-dozen pinholes were showing through on the inside of the fender apron which really wasn't a surprise.  I expected that there would be some followup.  But it's still a delicate art to fill the hole without creating a bigger one or worse yet, blowing through. 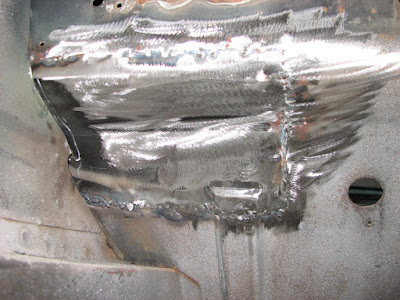 I thought I was done after working on this area from the firewall side, but when I went to the inside and started dressing the welds, I noticed an area that I had somehow missed entirely, including more pinhole rust.  Well....crap, to say the least.

The offending area was at the base of the toe board, which I did not replace in its entirety as I did on the driver's side.  The passenger side floor was also the first metal replacement work I did on the fastback.  Apparently, my evaluation of the panel wasn't as thorough as it should have been.   I had to cut out a piece about 6" long and 2" wide at the base where the toe board transitions to the floor.  Thankfully, it didn't extend under the floor piece I'd previously replaced.   The tricky part is that it wasn't accessible from the bottom, even though the seam was visible up under the torque box.  This was an exercise of patience to get this piece welded in.  To make sure I had all the weld joint completely done, I used my halogen shop light inside and then looked under the floor up by the torque box to see if there was any light shining through.  After multiple "stitch and grind" sessions, I had everything done to the best of my ability with no light shining through..at least that I could see. 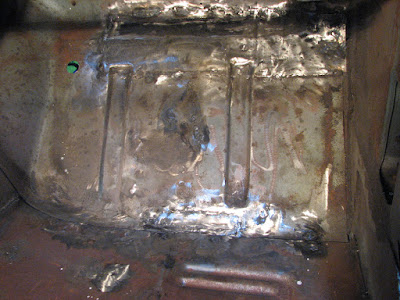 I had finally arrived at the point where I could begin application of the "Metal-to-Metal" filler on the weld joints on the firewall and floor.  I had never used this product before but I've seen posts of similar products.  It couldn't be any harder than standard body filler.

I mixed up a batch to the directions...or at least what I thought was per directions and applied it to the drivers side lower firewall.  It went on nice and thin covering the weld joints. 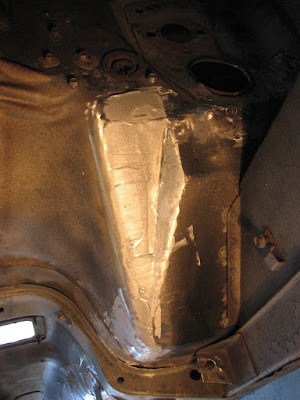 I waited for it to harden before moving on.  It wasn't happening as fast as I thought it was.  After 10 minutes, I realized that something was amiss.  It was not getting hard at all.  I resigned myself to the fact that I'd have to remove the filler and start over.

With this lesson behind me, I proceeded to the passenger firewall.  I wanted to make sure I had clean metal around that area.  I sprayed on the "Goo Gone" stripper I had been using on removing the remains of undercoating and sealer. 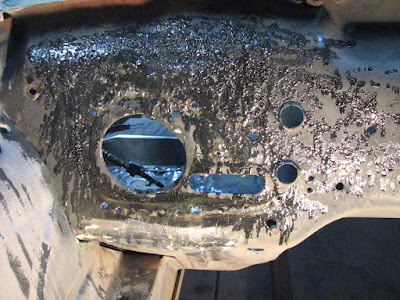 With a little encouragement from a coarse Scotch bright pad, it loosened up the paint, sealer, and whatnot.  Some mineral spirits on a rag removed the muck followed by wax and grease remover had clean metal.  A red Scotch bright pad was the finishing touch before the filler went on to give the surface some "tooth" to grab onto. 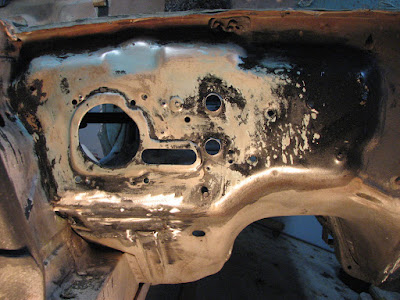 I carefully metered out the recommended amount of filler and activator.   It was going to take 2 batches to do this section.  Hopefully things would improve the second batch.  Well...it did...sort of. 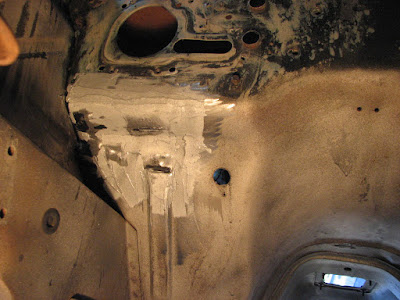 This round of filler was better, but still wasn't entirely setting up.  On the next batch, I increased the amount of activator by 10%.  Now things were getting better and the filler was setting up as it should have.

I kept the process going until I had the seams filled on the underside of the floor where the seams were on the transmission tunnel and where the front floor pan met the rear section. 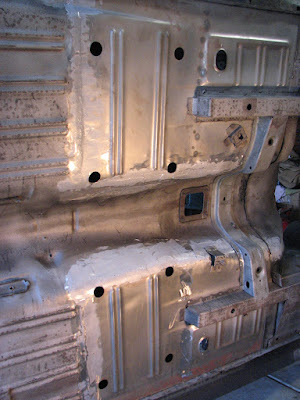 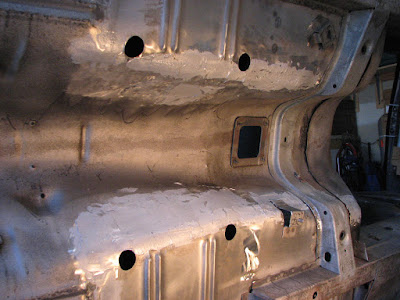 I was running out of time since I had a commitment in the evening to make a presentation about the group I work for as a pastor/pilot.  I fired up the torpedo heater and brought the garage up to 75F Degrees to find out if that would help the filler harden.  Unfortunately, it didn't work on the upper firewall on the passenger side and the driver's side will need to be removed and started from scratch.

In spite of the fact that I had pin hole, surprise rust, and filler hardening issues, this in a way is the first step in a positive direction to get the body shell body work done and in primer ready for paint.  Now all I need to do is crack the whip and keep the momentum going.  The short-term goal is to have the body completely in primer before Memorial Day weekend since I'll be getting ready to head north of the border for another summer of flying and missionary work among the First Nation people in Ontario and Manitoba.  As I have said too many times before--time will tell.