I cannot recall the last time I had two Saturdays in a row of work on the Mustang.   I don't know what's come over me!  A renewed passion?  Could be.  A desire to get this project further along?  More likely.  Sheer stubbornness?  Definitely.

When I closed shop last weekend, I had started to process of applying Metal-to-Metal body filler on the weld joints of the repairs on the firewall and floor.  The results were not great.  The material would not set up even after heating the garage to a toasty 75F.   The next day, it was still soft.  I was going to have to remove it and start all over.

That brings us to this past Saturday.  I got out all my body supplies in the hope that I could get this filler problem resolved.  Then with my trusty scraper blade in my Dremel multi-tool, I proceeded to remove the defective filler which was fairly easy. 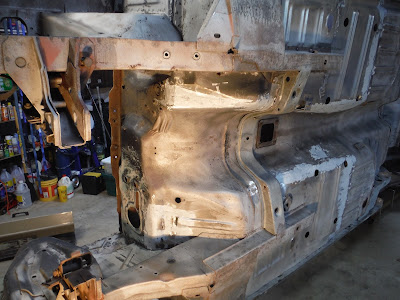 With a straight braided wire brush on my 4" grinder, I removed the remnant followed with a rubdown with Acetone to get all the old tainted filler off the body.

The offending areas were the firewall and the floor between the transmission tunnel support and torque boxes.  There was also a section on one side of the driveshaft tunnel area of the floor that wasn't hard enough to work.  I basically used the scraper everywhere I had put filler.  If it started to come off, I removed it all.  If it didn't and was hard, I left it.  It was the only way to make sure that unhardened filler was gone.  Hitting all the filler with the wire brush was the final test.  Powder flying...OK.  No powder or dust...remove it.

Round 2 began on the driver's side firewall and much to my dismay, even after adding 20% more activator, the results were only marginally better.  I began to wonder if the activator and filler were suspect.  I had it on the shelf for over a year, but it was never opened.  I thoroughly mixed it before starting to use it the weekend before.  So, just in case, I decided to make a run down to the local auto parts store and snag another can and activator.  It was a different brand, but the same basic stuff. I returned to a warm (68F) garage and noticed the driver's side was still soft enough you could dent it with a fingernail.

I decided to mix up a batch of the new stuff according to the directions  to find out if it was a product problem, an environment problem, or an "operator error" problem.  To make a long story short, I got the same results as with the original material.  Hmmm.  It had to be environmental.  The garage temp was OK.  Maybe the material hadn't come up to fully to room temperature.  And the body metal was probably not warmed up enough yet.  So I let things warm up for another couple of hours while I went up to the bonus room and watched my Louisville Cardinals loose to Miami.  So much for winning the ACC championship outright this year.

With everything in the garage thoroughly warmed up to 68F, I began round 3.  It started with  removing the offending filler again and adding 25% more of the activator to the filler.  This time, the product did what it was supposed to do and after 20 minutes of curing time, it was finally hard and workable. 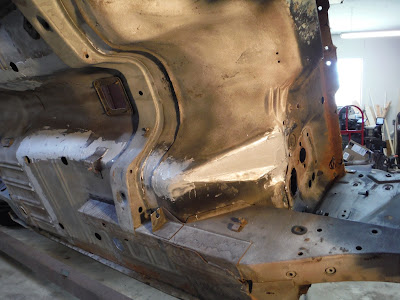 I proceeded to the passenger side firewall inside the fender apron and got a good application of filler applied there.  Then it was moving on to the firewall outside of the fender apron.  However, I noticed there was still some of the factory sealer and undercoating present and I didn't want to risk ruining the filler with the paint remover.


I put the multi-tool to work getting the big globs loosed followed by a coating of "Goo Gone" paint stripper. 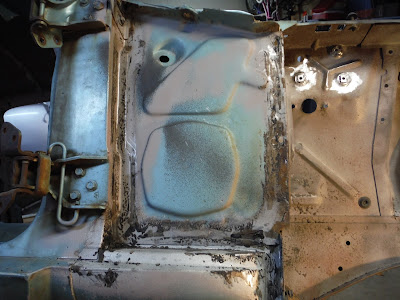 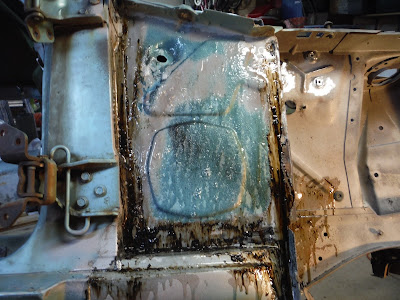 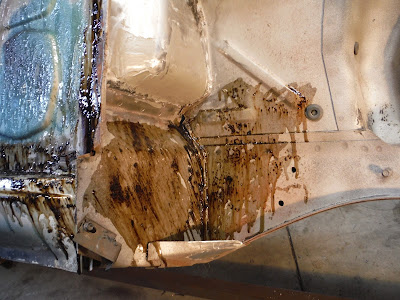 After 5 minutes, I hit it with a 3-M stripper pad to loosen whatever residual sealer was left.  Paper towels were used to mop up the excess.  I followed that with a couple of wipe downs with mineral spirits soaked towels and then wax and grease remover.  So now everything in this part of the body was spick n span clean and ready for filler. 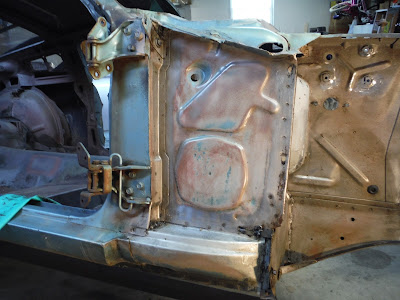 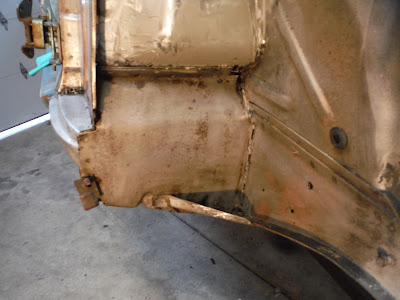 The next batch of filler was mixed at the same ratio as the previously successful batch and applied to the firewall and left to cure. 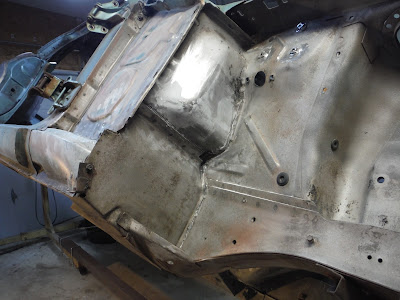 While waiting for that to set up, I moved to the right rear quarter panel to put some "Metal-to-Metal" on the rust repair in the top upper right corner of the trunk lip.


While this area was curing, I went back to the driver's side firewall and worked on sanding down that area.  I do have to keep reminding myself that this doesn't have to be "perfect" but respectable.  I think I'm meeting that goal...maybe going a little beyond that.  I can't help myself.  It's got to be good enough that if anyone ever climbs under the Mustang, there will be no telltale signs of metal work. 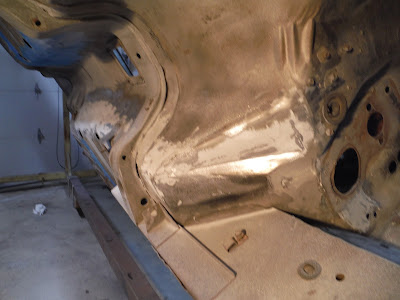 With this side done, I proceeded to work on the passenger side.  First, the inner firewall was sanded... 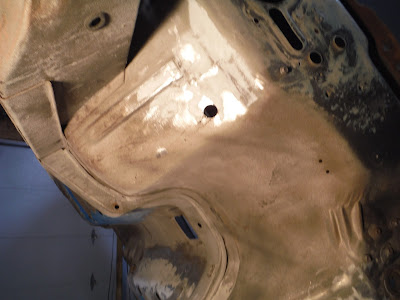 Then the outside firewall area was sanded smooth... 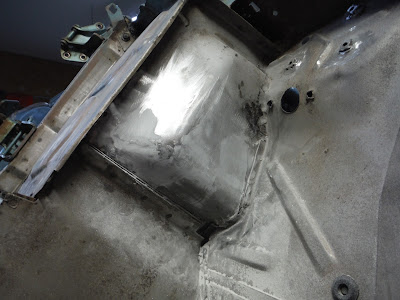 I proceeded back to the right rear corner and got this all sanded smooth. 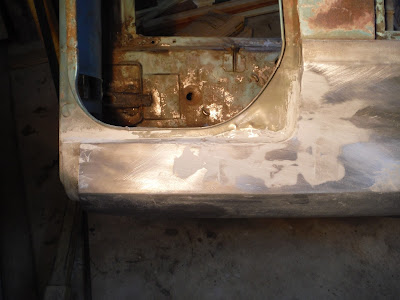 I rotated the body on the rotisserie and got the filler sanded and smooth on the transmission tunnel and the seam between the front and rear floor pans.  Now I was ready for the finished filler to be applied.  I started on the right rear quarter panel top and got the first layer applied... 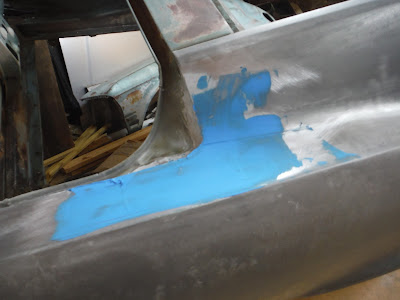 Then I mixed up a batch to smooth out the seams on the floor... 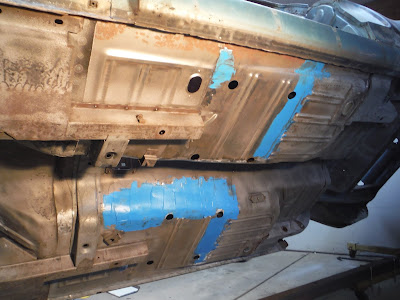 At this point in this rather protracted and somewhat frustrating day, I called it quits to go watch my wife's Alma Mater, University of Kentucky play and loose to unranked Vanderbilt on the road.  Not a good NCAA basketball day for our family.   Maybe I should have kept working on the fastback.   No.  I was tired and burned out on a process that should have been a slam dunk...no pun intended.

I have the firewall finish filler work left to do.  It will probably take another coat or two to get the underside and firewall ready for DP-74 epoxy primer.  Hopefully that will go better.   So the plan for this coming weekend is finish the filler work and get the metal cleaned of surface rust and remaining sealer.   Then comes the primer.  It's an aggressive plan, but who knows?  Maybe this round will go much smoother...pun intended!