The Race is on! Floor and Firewall Finish Work - Part 3

It's been a challenging piece of the project.  In my whole life, I never ever expected to do body work on the floor, more specifically, the underside of a car.  I'm not going for a "Rad Rides by Troy" or "Kindigit Designs" showpiece.   It's not going to be a 100 point MCA concours class Mustang.  It's going to be a driven Mustang fastback that will be restored to the best of my ability.  That also means my anal engineering mindset dictates the amount of detail I'm willing to go.  I'm doing it because of me.  Yes, the weld seams in the floor would have been OK to leave, but I would know they were there and visible.  Which makes me wonder, how many people get down on their hands and knees and look at the belly of the beast?  In my estimation, more than you think.  I've been to enough shows to see that.  Well, enough of this.

So with a handful of productive days and evenings, I have been trying to get the floors and firewall all ready for a coat of DP-74LF epoxy primer.  The big reason is that I'm getting a very translucent shade of brown indicating the formation of flash rust on the bare metal which has been bare for far too long.

After 3 rounds of applying filler and then sanding it off...and then another application, etc., I'm getting to the point of calling the filler work done on the floor. 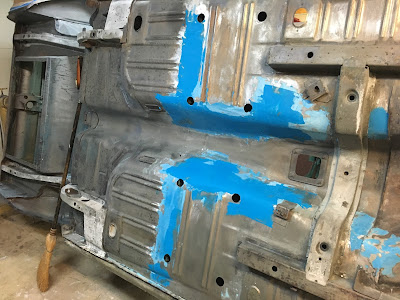 There is some work left on the firewall outside of the fender aprons, but hopefully that will go smoothly...no pun intended.  I was glad that all the metalwork on the car was finally done.   Or was it?

Somehow I managed to see an overlooked area of the passenger side floor.  Guess what I found?  The dreaded pinholes.  Except these were caused by rust, not by welding.  Two of the spots were in the curved section of the floor.   Ugh!  The one good thing is that these were pencil lead size holes with relatively good metal around them.  Then a though hit me.  I have my box of slugs from the punch press where I worked in manufacturing eons ago.  So I dug through them to find some with the correct thickness and then checked out my drill bits to find the right size hole to drill through the center of the rust pit.  With bit and plug matched, it was on to the repair. 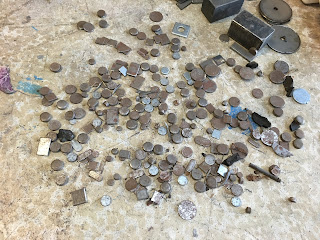 I drilled through the three rust holes and then used a fine rat tail file to open the holes so the plug fit snugly.  The slugs were slightly thicker than the floor metal on purpose to give me something to weld to and grind down, especially on the contour. 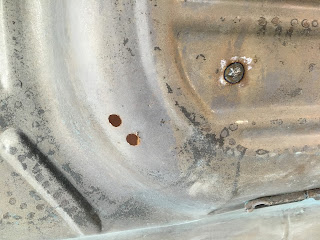 After fitting the plug, I took a piece of duct tape and put it on the inside of the floor to keep the plug from falling through and becoming lost on the garage floor (which happened a couple of times). 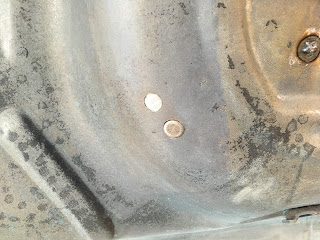 Then I tacked the plug in, blew compressed air on it and then did a couple more tack welds.  the weld was carefully ground down with my 2" air sander and then the process of tack, cool, grind continued until I had the plug completely welded with no gaps or pinholes. 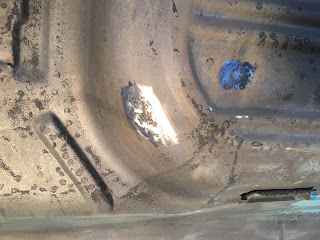 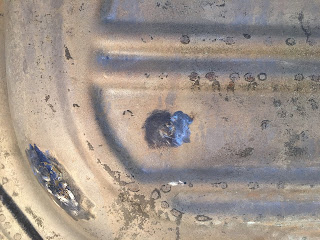 The 3 plugs came out OK.  Nothing spectacular, but passable.  Remember, it's just the floor of a car, right?  I mixed up a small batch of Metal-to-Metal and put a skim coat over the repair. 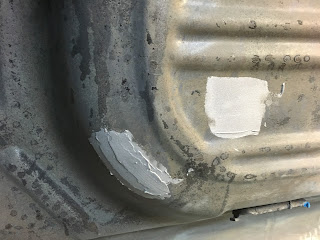 A little sanding and a finish coat of filler will have this repair done.  I'm holding my breath I don't find any more areas that need metal repair.  But the way my luck has been going, I wouldn't be surprised.

I'm hoping that I'll be spraying DP-74 on Thursday evening, but with house prep and family and company coming in mass from out of town for my youngest daughter's first baby shower, I don't think I'll get much done.  I still haven't begun to pack for my excursion up north.

So...if you check back in a week or so and see a new post, you can figure I was successful.   If not, then the fail has occurred.