This is more of an update than a major leap forward on the hood.  So don't get your hopes up that's it's finished and in epoxy primer.  Not yet.

One thing I discovered is that my Kobalt (Lowes) 6" DA sander had a 3 year "no fuss" warranty.  So I replaced the old one with a new one.  So far, it's working OK.  I noticed that the new one has a label calling for oiling before and after use that the old one didn't have.  Maybe that was the problem.  Anyway...

So with new DA in hand and the need to de-stress after a hard emotional few days in Manitoba, I worked on the exterior surface of the hood Saturday in nice 72 F degree sunny weather after cutting the grass that decided to jump to life.   Nothing spectacular.  Just plain 'ol patience.  That red factory paint is tough!

The one thing that did reveal itself is that there are 2 placed along the center peak between the turn signal opening and the front lip with minor creasing as if something was dropped across the hood or the hood fell over.  It's nothing that's major.  I'll probably pull the dents a little with my stud welding gun and a curved face body hammer.  Then a little filler will get it back into shape. 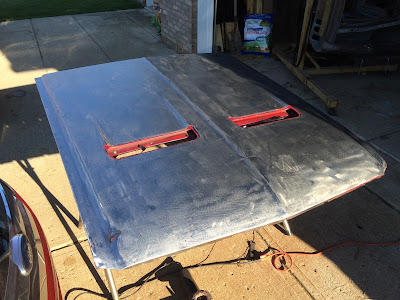 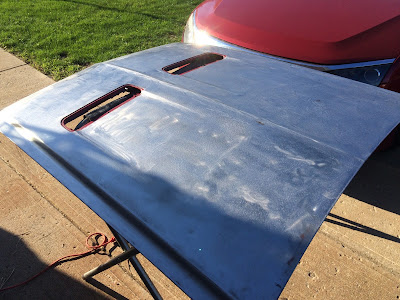 With the top of the hood cleaned and treated with "After Blast", it's ready for the body work and primer.  Unfortunately, the underside of the hood still needs to be stripped...or at lease the surface cut with a Scotch Brite pad.   I'll have to see how that whole process goes.  At any rate, progress was made, abet a snail's pace.