My summer in Canada came to an end in August.  Over the 11 weeks I was there, I visited 16 First Nation's communities, flew over 55 flight hours covering almost 8,000 miles.  I was as far south as Dryden, Ontario and as far north as Churchill, Manitoba on Hudson Bay.  That's a lot of real estate to cover and a lot of people to see.  It was all good and I enjoyed meeting new people and seeing old friends again.  I always leave a little part of me behind when I come back home.  But it's always good to be home, especially when I had a new arrival waiting for me to see.   And no...it wasn't a car.  It was my newest grandson, Arliss Edward Shelman...


I had my flight booked to DC to go see him before I returned from Canada.  I was only home for a few days before that trip.  He was almost a month old already.  Now I have a total of 5 grandchildren--3 boys and 2 girls.  I can't be any more blessed!

After my return from DC, there was a whole list of things I didn't get done before I left for the summer.  Unfortunately, there was more than just the the Mustang to address.

We've lived in our house we built almost 13 years ago long enough that exterior maintenance is required.  The natural cedar trim around the top of the chimney had to be replaced.  It takes a real beating from the weather.  Then the trim and siding needed to be painted it as well.  The list continued with all three of the vehicles needing maintenance... brake work on the Civic and Fusion and spark plugs on the F-150.  The garage was a disaster area with paint, construction supplies and tools strewn everywhere including my stuff I took north.  I also took back over the lawn care my wife had been doing as well.   So I got really backed up and it took a couple of weeks just to get everything sorted.

So now...on to the fastback.

She was in the same condition as when I left, thanks to the Picklex-20.  I had picked up a couple of tubes of automotive grade sealer and had a can of Eastwood seam sealer on the shelf. 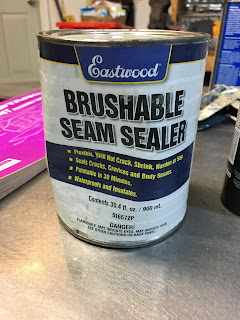 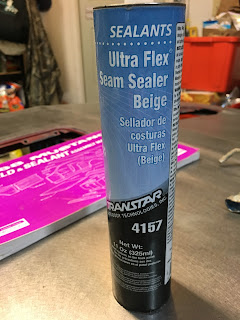 I took the factory weld and sealant manual with me up north over the summer to study the method and location of the sealant.  There's a lot that was used when panels were joined together such as the inner wheel tubs to the quarter panels.  That obviously wasn't going to happen.  But there were a host of other seams on the underside that were detailed... 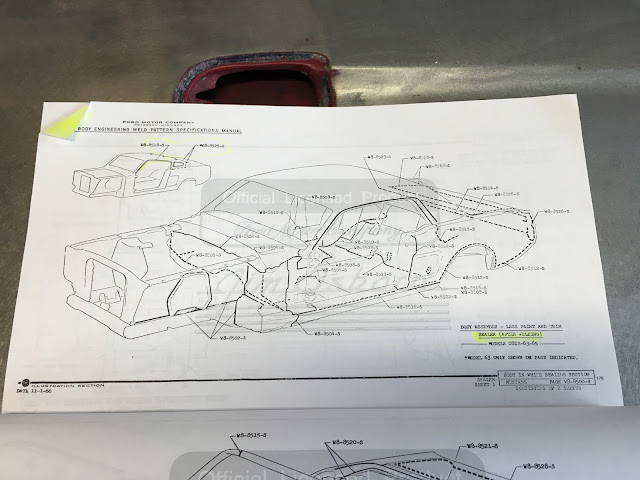 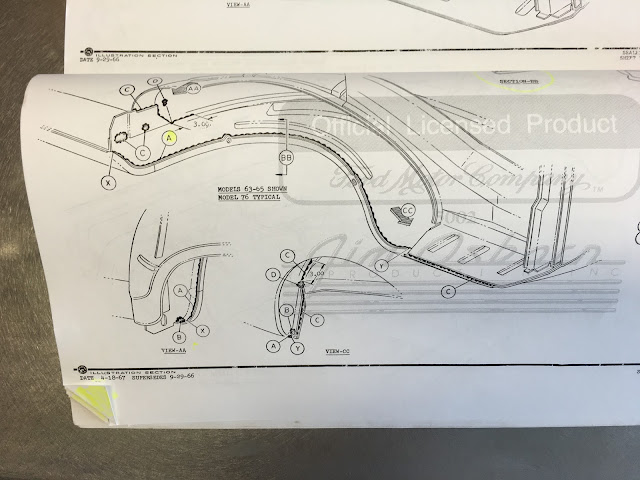 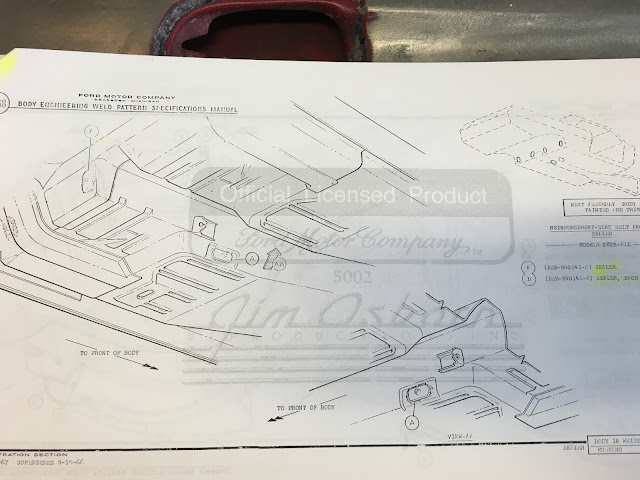 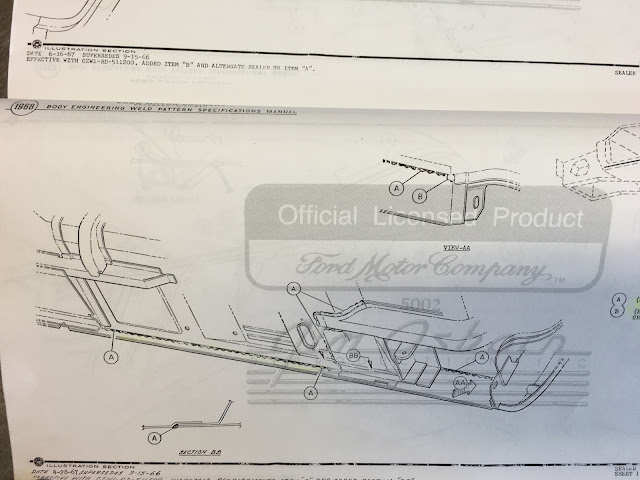 If you don't have a copy of the Ford factory manuals, I highly recommend you get the set.  They're available on-line from a number of sources including eBay.  Even if you're not doing an original or "Concours" restoration, they will help you at least see how the beast was assembled.

With my fall return trip to Canada looming and a window of opportunity available, I gathered the caulking gun, tube of sealer, can of lacquer thinner, the can of brushable sealant, and tinning brushes, and went at the task of sealing all the joints.

Since I'm doing an "original" style restoration, I made sure the right sealant type went in the right places.  I also wasn't exactly "neat" about it since the factory wasn't either.   Ford made over 317,000 Mustangs across 3 plants in 1968.   That works out to approximately 40 cars per hour coming off the production line.  There wasn't time to be absolutely neat about the task.  Beside, there are complaints by MCA judges of over-restored cars that are too perfect.  So I put the sealer on without a worry about perfect beads and brush marks and left the globs and goobers behind.

The sealer in the tube was beige in color.  The original factory color was black.  It's going to be painted over with red oxide epoxy primer.  So sealer color wasn't an issue, not to mention the beige was in stock and black wasn't.

The brushable sealer was a gray color.  No big deal either. I put it on where the manual suggested.  Some sealer isn't visible since it's applied to locations that are hidden from the eye such as inside the rear quarter panel to wheel tub seam.


I need to do some more sealing in the engine bay and firewall area.  Before I do that, there is some old sealer and undercoating that I need to remove and clean up.   Then it's on to the next task of actually spraying on the epoxy primer on the floor and firewall.

After that, I'll need to focus on the interior of the body shell by cleaning up the surface rust that's on the interior floor and under the dash, remove and replace the factory sealant on the interior, and give everything inside a coat of Zero Rust.  When that's done, I need to build a body cart and take the shell off the rotisserie.  Then it's on to hanging the fenders, doors, hood, and trunk lid for alignment and any minor filler work.  Hopefully, I can carve out time to get this project moved further down the road so-to-speak.

So a little more progress had been made on the fastback.  It would be nice to have it go faster, but that's a pipe dream at this point.