Preparing for Paint and Body Work

I feel like I've got a foot in the U.S. and a foot in Canada lately.  It's been a crazy busy time with work and family.   Throw in a wedding, baptism, and weekend PR travel for me and October has flown by quickly.   Case in point:  I've only been able to go out bow hunting 3 days since the season opened October 1.  Oh well.  There's always November, right?  (sounds painfully like the Cubs prior to their World Series win this year)

I ordered a quart of PPG DPLF-90 which is the black epoxy primer.  My intention is to mix it with the DPLF-74 red oxide to darken it up as the straight 74 is brighter than I'd like and what was original to the car.  This product can't be tinted so that's the reason for the color mix.

The other thing I need to do is have a better environment in which to paint in my garage.   I need to keep the dust and crud off the car and at the same time, keep the paint overspray off the rest of the garage contents.  So in this exciting episode, I'll show you what I did to prepare for the paint and body work.

I wanted to have some flexibility in making this paint/dust containment booth so that I could open it up and have access to the rest of the garage when not in use.   After putting some thought behind this project, I decided to use 5 mil plastic sheets for the barrier.   Attaching it to the ceiling of the garage was the issue, especially to keep it all in place for a long duration (and everyone knows how long "long" is for me).

I laid out the location on the garage ceiling and used my stud finder to locate the rafter joists.  Then I used pine 1" X 2" X 8' boards and attached them to the ceiling using 3" drywall screws.  After that, I cut 2" wide strips of corrugated cardboard out of old boxes so that I would create a washer of sorts.  I sandwiched the plastic sheet in between the wood strips and the corrugated strips and stapled it into position.  If I didn't to this, the plastic would easily pull through the staples.  I attached it on the vertical face of the 1 X 2 boards. 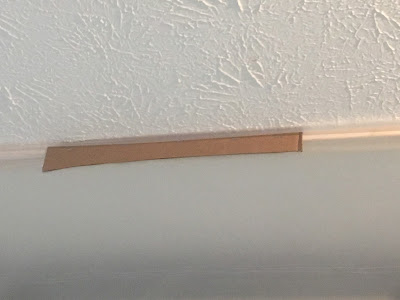 I proceeded to do this around the perimeter of the main 2 bay section of the garage.  It would protect all the family items (i.e. junk) that is on the shelves from paint and body filler dust.  It looked like it would work quite well and I'd still have enough working space for the Mustang. 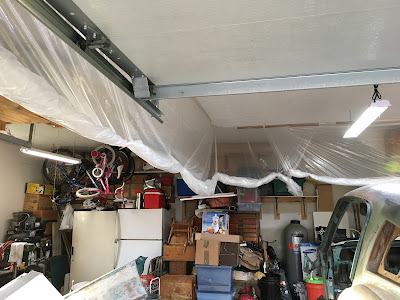 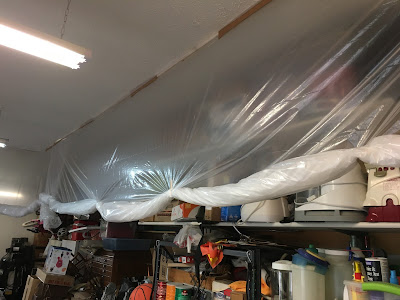 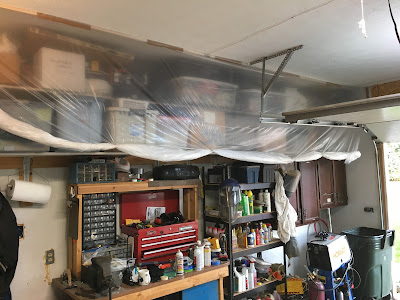 The best part, as you can see from the pictures above, is that I can roll it up and get it out of the way when not needed.  With Thanksgiving coming soon (Yikes!) I need to have a clear path to the refrigerator in the 3rd bay for food and BEvERage storage.   Clothespins to the rescue!   All I have to do is roll up the plastic and pin it up.  So far, it works great. 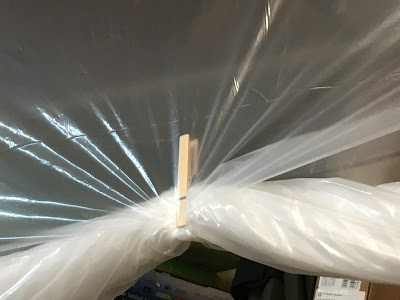 So now the pressure is on the actually get paint on the Mustang.  I refuse to put a deadline on myself since I've broken every single one so far.   Suffice it to say, I'll get the epoxy on the floor in the future...the near future hopefully.