It's been quite a Fall.  As I looked at the calendar and how full it was becoming, and how much of the month had already gone by, I had my doubts that I would have any window to get the floor, lower firewall, and front frame rails in epoxy primer this year.  I had to travel to Michigan...Twice in the first two weeks of November.  One trip for business and a second for vacation to close the family cabin.   I also needed to work in some deer hunting to get venison in the freezer since last year was a huge deer hunt bust.   Unfortunately, my first deer came using my truck as a weapon outside of Grand Rapids on I-196 instead of my bow or gun.  I was fortunate that my wife and I were in my truck and not her Fusion.  Otherwise, I probably wouldn't be writing this as the outcome would have been much worse.  I had to make some "field repairs" to make the truck more driveable.  I loosened the left-front fender and pulled/pried it forward so that the driver's side door could open. Then I used my knee to push and hands to pull in logistical locations on the fender to get it straightened out more. 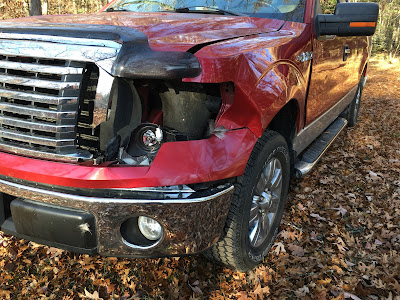 After a trip to the local Ace Hardware store, I patched the corner up with a 9" x 11" throw away aluminum pan, a roll of Gorilla Tape, and a piece of plexiglass.  It worked surprisingly well.  I wanted to at least be able to drive it safely...and try and put off taking it to the body shop until after I got some hunting in.  It goes into the body shop the week after Thanksgiving. 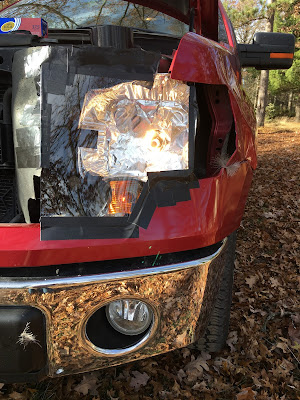 I was hoping that the unusually mild November weather would hold out to give me a chance to get paint on the car.  Unfortunately, the weather took a turn for colder more seasonable weather after getting home.   The good news is that it made the deer more active and I got a nice size doe Sunday late afternoon.  That freed up the rest of the week before Thanksgiving to work on the fastback.

I have been thinking and planning about what I wanted painted with epoxy paint and what I didn't want painted.  With a plan in place, I used my Eastwood tape and paper machine to mask off the body along the outer flange of the rocker panel, the rear quarter panel flanges along with the trunk/gas tank flange. 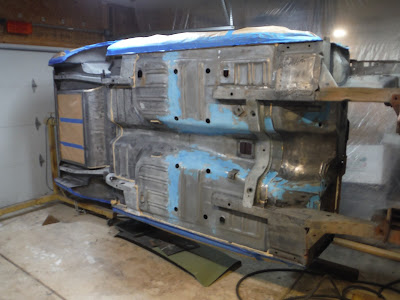 Then there was the final prepping of the floor.  I had some remnant of  undercoating I needed to remove and clean up.  I used the 3M red scuff pads on the underside just to make sure I had good adhesion even though the Pickel-X said I could paint right over it.  I followed that with a wipe down using wax and grease remover.

It was time to actually apply paint.  It seemed surreal that after 11-1/2 years of ownership, I was at a major turning point.  in all honesty, I was a little apprehensive about it.  It had been so long since I sprayed any paint on a vehicle.  It was my first time using a HVLP spray gun.  Would I screw this up?  Would I get it right?   But enough of that.  Time to forge ahead.

I used a mixing cup to experiment with the ratio of the DP74 red oxide to the DP90 black until I got to the color tint I wanted.  The DPLF epoxy can't be tinted.  So the only way to change the color is to mix the different colors of DPLF together.  I didn't want to go broke at $80 a quart for three more colors.  I only wanted the red oxide toned down some.  After adding a little at a time and mixing thoroughly, I found the ratio at 4:1 of DP74 to DP90 would work.  It was exactly what I wanted.

I got my HVLP gun set up with the desiccant filter and pressure gauge to adjust the air pressure at the gun.


I lowered my previously installed plastic curtain to contain whatever paint overspray I'd make.  I was also hoping to manage the heat and ventilation to keep the garage warm enough for the epoxy to cure and yet keep the fire/explosion potential eliminated.  I got the garage heated up and then shut down the torpedo heater since open flame and fumes do not mix!  I moved the heater to the other side of the plastic just in case.  Safety first in my garage!

I loaded up the gun, donned my respirator, and off I went spraying.  I was immediately and pleasantly surprised at the minimal overspray with the HVLP gun.  I varied the fan pattern to get paint into some of the tight spaces.  Being able to rotate the body to the best position for paint application and lighting was great. 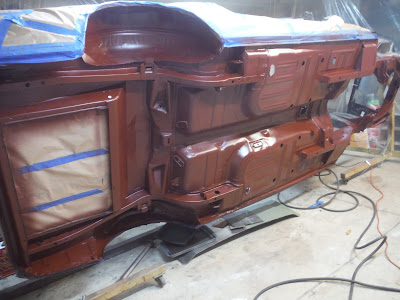 Everything was going according to plan.  The garage was a little cooler (~60F) than I wanted, but the ventilation was important for both me and turning the heat back on with my torpedo heater.  You never really know how much paint to mix.  I initially mixed 18 oz total of paint and catalyst.  I had to mix another 12 oz to finish up which was just enough. 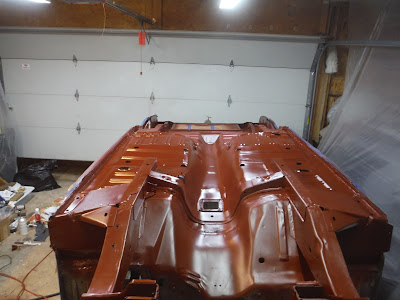 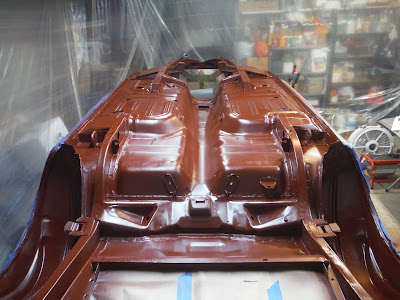 I ventilated the garage for about 5 minutes before getting the heat going again and kept the garage door open a few inches just to be sure the ventilation was still going.  Thankfully, it all worked out perfectly!   I got the heat directed under the car with the floor side down to try and help cure the pain in garage that had cooled off to almost 50F which I really wanted to avoid.  However, as the temp rose back into the high 60's, it looked like it would be OK.


I love the way the tint of the color worked out too.  You would have to look really close to see where the floor repairs were.  If you're like me, I notice that stuff but it is because I've been looking at it for so long!   I cleaned up the gun and the garage and stood back and looked at the dramatic change.  What a huge step in the right direction!

I left the garage door open for another 15 minutes and then closed it up with the heat still going.  When my wife got home from choir practice, I had two glasses of wine waiting.  I handed her a glass and said, "Let's toast to a major milestone."   She looked at me with a quizzical look.  I said, "Come with me" and started walking toward the garage.  "You got the car painted!" she said. I opened the door into the garage and turned on the light.  Then I went to the rotisserie and rotated the car so she could see the freshly painted floor.  My wife blurted out, "That looks fantastic!  I can't believe how good it looks!"   She knew as well as me what a ginormous moment this was since we've had the fastback. The garage was approaching 70F.  I shut down the lights and heat and closed up shop for the night.

The next morning, I took a look all over and for the most part, I got everything covered fairly well.  There are a couple of spots I'll go back and touch up later, but for all intents and purpose, the floor and lower firewall are done!!!

Now it's on to the interior metal prep for paint by removing the rest of the sealer and cleaning all the surface rust off the dash and upper inside firewall along with the inside of the roof and body panels.

Who knows?  I might just have this baby ready for paint by next spring.  No.  I better not make any speculation on when that will happen based on my history with this beast.  But one can only hope, right?