I can't remember the last time I made 2 posts in 1 week, let alone 2 post in 3 days.  But I won't complain.  From my last post, I started breaking down the engine to find out how bad it really was.  So far, the pistons are stuck in the bore, but the lifter galley and bores are in really good condition.

But before I get to part 2 of the engine, I needed to get help working on getting the gaps on the doors, fenders, and hood as evenly spaced as possible.  I bolted everything together before heading to Canada for the summer just to get the doors and fenders out of harms way.  You can look at that post from last June.

My help came from a Marine veteran who is looking for work in law enforcement after graduating from college.   We spent close to 3 hours getting the hood close (the hinges will need some rework) and the passenger side door and fender lined up.  Overall, it's not going to get much better than what we accomplished without getting into a lot of work welding on metal, grinding, etc.  I applaud the guys who take the time to do the meticulous metalwork, but I'm looking for a more accurate restoration.  And the gaps weren't that great from the factory.  To each his own. 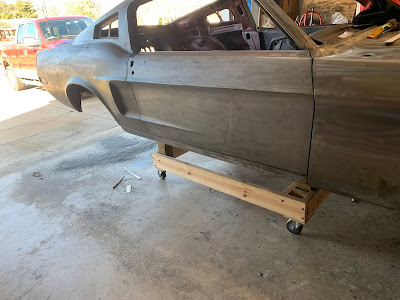 This was the challenge: get the door, fender, and rocker panel gaps consistent. It took some shims on the bottom of the fender to rocker panel bolt to get it close.  It wouldn't have been possible to get the gaps this consistent without the extra set of hands...or spending an inordinate amount of time trying. 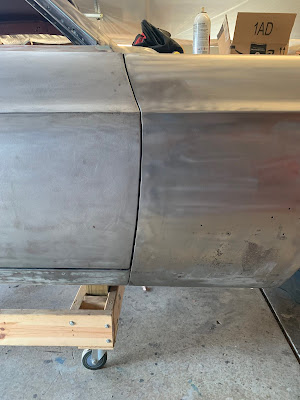 This gap was also a challenge as moving one end of the door changes the gaps of the other end.  It's an exercise in 3-dimension spacial orientation. 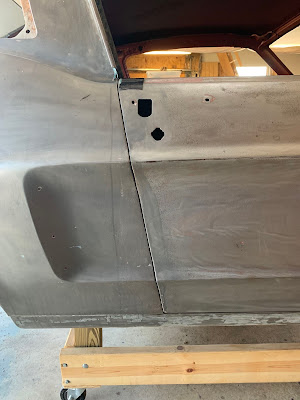 The bottom of the door gap ends up being whatever it is because the reveal lines must line up.  I'm amazed that the assembly line can hang doors and fenders once every 45 seconds. (Ford made 880 Mustangs per day in 1971). 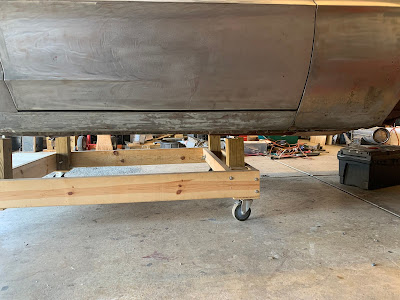 The driver's side didn't go so well.  The door is still not totally lining up, but there's a bigger issue at play... 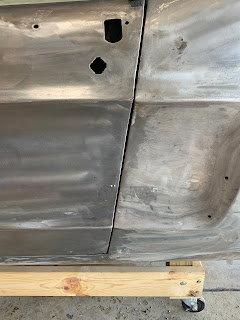 The fender and the door gaps are not lining up.  It's not so much at the reveal lines looking straight on but it's the contours of the door and fender that don't line up...and I think it may have been my doing. 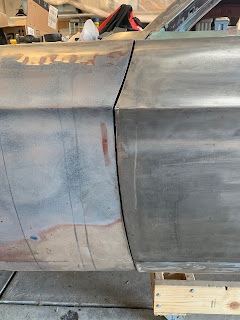 When I did the rust repair on this fender, it wasn't attached to anything.  I did it on a stand and the garage floor.  Apparently, the metal shrunk and the contour is flatter than the door.  That was a major oversight on my part. 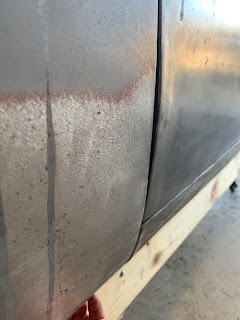 So it looks like I'll end up re-doing the metalwork on the fender while it's bolted in place to make sure it will be the same as the door.  That will be another post in the future.

I got the engines swapped on their respective cradle/stand thanks to one of my friends who loaned me his engine hoist. 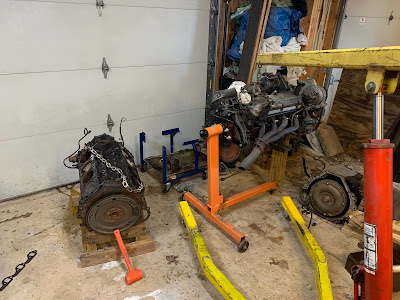 Before I I flipped the 302 over and pulled the oil pan, I drained the pan to be sure it was empty.  I probably drained it before I pulled the engine, but that was a LONG time ago.   There was probably a pint of transmission fluid that I poured in the engine to try and preserve the engine after pulling it.  I was pleasantly surprised to see the amount of sludge was minimal. 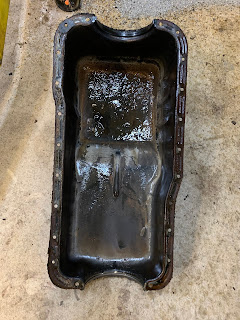 I was also pleased to see that there was no sludge in the bottom of the block. 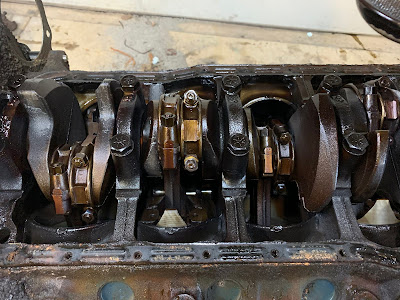 The piston skirts that were visible showed almost no signs of wear. 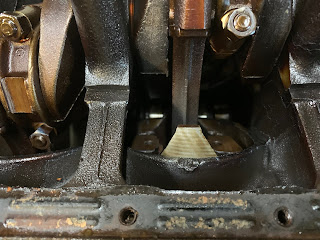 The oil pump pickup had no signs of metal and was clear of any crud... 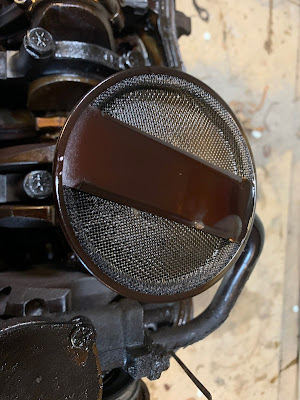 The wrist pins were also clean.  My assessment is that this engine has not been rebuilt, especially after looking at the cylinder bores and internals in the block. 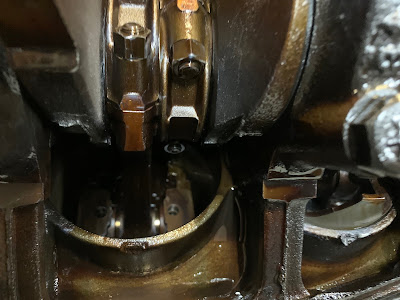 This 302 had to have been a running and reasonably maintained vehicle when it was parked,  most likely after the accident that damaged the hood, right fender, bumper, and related front end parts.  The top of the air cleaner was missing when I got the fastback leaving the engine open for rain to get into the engine.  Hence the locked up engine...

Now that I've determined that the only issue with the original engine is the stuck pistons, I'll set it aside and let the PB blaster work on the cylinders and see if I can get the rings to break loose.

The next work session will be to work on the driver's side fender and get that contour matched to the door.  I still have some small dents to take care of on the fenders, rear quarters, and roof.  Then the filler work will begin followed by the high build primer.