The Engine - Back at Home

After several weeks, the engine for my Mustang has finally made it home.  As with many restoration projects, this one had its share of surprises and headaches.

One of them was the oil pan that had rust holes hidden from the crud that was on it.  The new Scott Drake pan came in and I dropped it off at the shop.  Assembly continued with the cam and heads.  And then, things started going off the rails.

When assembly started, Ray from Legacy Motorsports said the machinist thought this engine had been gone through before.   There were a couple of telltale signs.  The first one was the rods.  I had stamped the number of the cylinder that each one came out of in the center of the rod cap before removal from the block.  However, there was another number I didn't notice that was stamped in the side of each rod.  Guess what?  They didn't match!  So there was some head scratching, measuring, and thought put into how to progress.  Ray went with the last numbers I had since the engine obviously was running before it was parked.  Everything rotated well and he's confident there will be no issues.  He told me horror stories of seeing engines with pistons put in backwards, etc. etc.   So that was behind us.

Then things got interesting when the heads went on.  Apparently the kit came with a thin metal head gasket that if it was installed would have likely raised the compression into the 11.5 or 12 to one range.  So another thicker gasket was ordered and Ray felt that the compression would be near stock.  But the fun didn't stop there.

When the new CompCam pushrods and roller tip rocker arms when together, the roller tip was not in the center of the valve stem.  The new stock length pushrods were too long.  Crap!  I couldn't return them as they were sold as a kit with the rocker arms.

So with the stock length of pushrod at 6.881" long, I needed to get a pushrod checker that was shorter.  I ordered a CompCams checker that was good for 6.8" to 7.8" figuring that it would be short enough.   No bueno!  Still too long.  So now I had a set of pushrods and a pushrod checker that cost $47 (thanks to CompCams sending it FedEx express which I didn't ask for) that were no good to me.  I called Jegs up since they were helpful on the cam kit.  They pointed me to a checker that was good for 6.1" to 7.5".   This one worked.  Counting the turns and adding that to the 6.1" yielded a length close to 6.7" long.   So I ordered a set which added $190 to the engine budget.  I held my breath as I watched Ray put one in and adjust it.  Success!  It was right in the center of the valve stem!

With that task done, it was a simple task of putting on the valve covers and intake manifold to finish up the work the shop was going to do.  Everything else, I'll do in my garage. 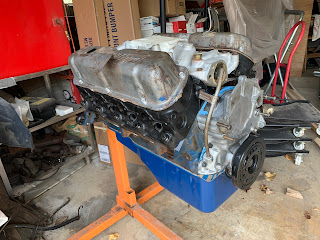 It's now mounted on the engine stand and patiently waiting for the water pump to be installed.  I bought a set of spark plugs to seal off the cylinders and will tape off the exhaust ports on the heads to seal them up.  The valve train has been loosened up so that all the valves are closed and the spring tension removed.  Once I get it in the Mustang, Ray will come over and help set up everything.  It only goes to show that when rebuilding an older engine, you can be sure you will uncover previous unknown work that was done.  Lesson learned.

When it was all said and done, I went over my budget by almost $1,000.  But everything inside, except the rods and crank, is new and done with quality parts.  Now I need to get my butt in gear and get the Mustang far enough along that I can put the engine in and really make steps to get it done.   That will be a challenge, especially in the next few months.

The organization I retired from has asked if I would come back on staff to help them through the transition of Executive Directors.  The current one is retiring and they are in the process of interviewing candidates.  So, as my daughters keep telling me, "Dad!  You're failing retirement.  I suppose that's true, but I'll take any progress on the Mustang that I can get.