It took awhile, but the engine is now at Legacy Motorsports for assembly.  But then again, I'm nowhere near being ready to drop the engine in the fastback.

The guy who's doing the work is very meticulous and sent me pictures of all the clearances for the rod and main bearings as it was going together.  Ray is an "old school" engine builder and likes to use Plastigauge for measurements.

Ray said that the assembly could not have gone better.  All the clearances were spot-on.  We did have a couple of minor setbacks.  The head gaskets that came with the kit were .020 and would have raised the compression to 11.5:1 which would be way too high.  So they were returned for .039 thick head gaskets which should keep the compression within the stock 10:5:1 range.
The other setback was the oil pan has rust holes in the bottom that we didn't notice since it had so much crud on it. 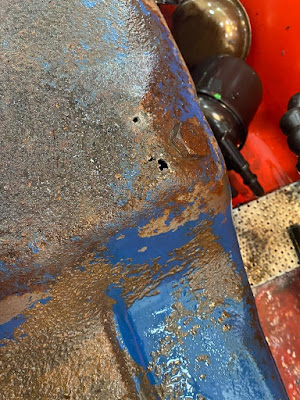 So I ordered a Scott Drake concours pan since I wasn't sure about the aftermarket ones that added an extra quart capacity to them.  I didn't want anything hanging down too low.  But maybe I was just being too picky as well.  I ordered some other goodies on the Labor Day sale, like new water temperature, oil pressure sending units, and upper thermostat housing (since I cracked the original one removing it).
When the pan comes in, I'll take it over to Ray and get some more pictures.  I need to clean up the valve covers as well so they can be installed.  That way, the engine will be mostly sealed up while waiting for installation.
I have done work on the left front fender and not happy with the patch I put in awhile ago.  So I've started redoing it (twice so far... I'll explain later).  But that work will be put on hold for a couple of weeks as I set off to paint the house which it needs.  I've been waiting for temperatures to moderate which it looks like I'll have a window coming up.  Once I knock that work out, it's back on the body work, hopefully with no major work interruptions.
Until the next time...
Posted by deo1929 at 12:01 PM