This is a new venture for me.  Blogging that is.  I've been thinking about doing this ever since my 3 daughters all started blogs of their own. Why on earth would I ever delve into something like this?   Do I really have the time?  Not really.  Will I be able to keep it up to date and not have blogs and photos that are months old?  (Hint, Hint to some of my daughters)    I hope so.  As all things in life go, we'll just wait and see.   And I also hope starting this on April 1 (aka "April Fools Day") won't be an indicator of its success.

So...back to the reason for this blog.

I have owned this 1968 Mustang for 6 years as of the 17th of this month.    I came across this car through a very close friend at church who is also a car guy (55 Chevy waiting restoration & a driver 1973 Vette).   He had heard about it through a guy at work.   While my friend Glenn was tracking down the whereabouts and owner, I had decided to hang up my headset as a Civil Air Patrol pilot and chaplain.     It was a great stress reliever, especially at 9,000 feet as a "high bird" communications platform during missions.  But the time it took to fly and handle chaplain duties for the squadron was quite large--the 45 minute drive each way to the airport, the time required to prepare to fly, etc.    So I thought, "For the money I was spending on flying, I could get another car, invest that money, and have something to show for it besides a pilot's logbook with a bunch of hours in it.   Hence the arrival of the Mustang.

We ended up calling her "Eleanor" after the 1967 Shelby 500 GT Mustang in the movie "Gone in 60 Seconds".   Even tho' she will not be made into an "Eleanor" the name stuck.   Originally, I was going to turn the ol' gal into a "Bullitt" Mustang  (check out Steve McQueen in the movie "Bullitt" and you'll see why).   I started collecting parts in the right color and options for the car.   And then in doing some research on the car, I hit a snag--a MAJOR snag.

I had ordered the DNA for my car from Marti Auto Works.   Kevin Marti has the complete database of 1967 and newer Mustangs.   I thought it would be fun to know what options came on the car and if it was a rare car.   I knew the color was unique, but had no idea how unique until the report hit my mailbox.   I opened it up and there is was... 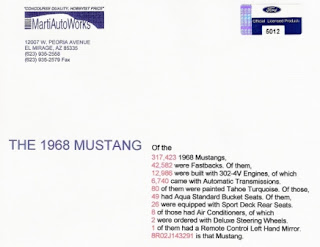 Our Mustang was a ONE-of ONE car!   Part of me went "yay" and another part of me when "crap."   I wasn't a fan of "Tahoe Turquoise" as it's what I call a "girly" color.   After discussing my situation with some people in the hobby, I ditched the Bullitt theme (there's a bunch of Bullitt recreations now anyway) and decided to go original...or almost original.   I have made 3 concessions.

1.  I can't do the nasty, ugly, two-tone Aqua interior.   Black is in the plans and won't hurt the value.
2.  I can't do the factory automatic.   I'm mothballing the ORIGINAL engine and transmission for a later model 5.0 (still a 302) and a 5 speed manual transmission.  I can still put it back to original if needed however.
3.  For safety sake, I'm adding power disc brakes.

Well, so now you know how I got to the beginning of this project.   As the weeks go by, I'll update pictures of the car and what life is sometimes like for a "Faster Pastor".   My intention is that this blog may help me keep my creative juices going and give me the motivation to get this gal's restoration back on track and eventually turn the key and go for a cruise.   Hmmmm.....   Do I hear the tune "Route 66" playing on her 8-track???
Posted by deo1929 at 1:03 PM