The temperatures and my schedule haven't been cooperating for me to get more work done on the fastback.  Three trips in three weeks sucked the clock dry.   The first week in May was to a conference for 2 and a half days.  Then the next 2 weeks were 2 trips to Michigan.  Sunday of Mother's Day, I went to Battle Creek for 2 days to help my mom on my annual spring trip with things to keep her house maintenance current.  The week after was to our family cabin near Baldwin to open it up for the summer.  That was also a 2 day trip that included 8 hours of chain saw work to remove 4 trees that fell.  #1 tree blocked the driveway.... 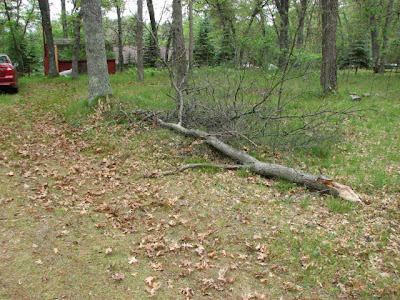 #2 tree had fallen across the walk to the cabin...

#3 tree had fallen onto to the roof of the cabin and the incoming power line... 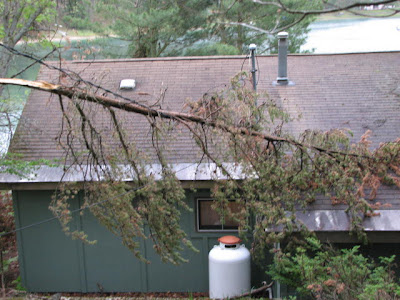 The power was still on, but I had the electric company come out and cut it off the line.  I still had to remove the remains.

#4 tree was the largest and the main trunk just missed the cabin by 18". 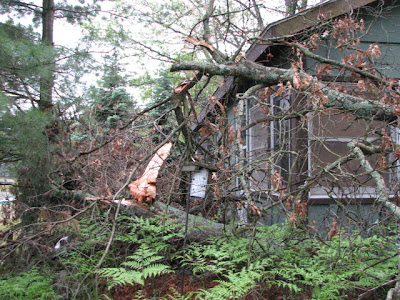 Some smaller branches hit the roof but there was no major damage--just a lot of work I didn't expect to do.  Oh well...    The good news is that there wasn't any damage.  The bad news is I still have two debris piles from 2 of the trees yet to drag across the road to our brush pile we have in the woods.   But we're ready for family to start using the place.

Both trips to Michigan required me to take a load of tools to handle the tasks at hand.   Between trips, I was just stacking and putting stuff in the garage wherever I could, which meant I had stuff everywhere.   So Memorial Day I got up early to beat the heat and get some chores done outside.  Then I turned to the garage to reclaim my work space for the fastback.

After that was done, I searched through my corrugated box collection to find a box for the parts I had taken off the car.  With bagging and tagging and boxing done for most of them, I turned back to getting those blasted door striker plates out of the car.  Even after multiple soakings, I couldn't get the screws to budge using my hand-held impact driver.  I decided to resort to my impact wrench.   No such luck.   I guess I'll have to keep them soaking for a couple of days and find out if that will loosen them.   I moved on to the remainder of the parts left on the body.

I used PB Blaster to soak down all the small clips that hold various interior panels in place.   I took the parts off and was sure I kept them organized as far as left and right side along with B pillar and sail panel.   Here's that pile of parts.... 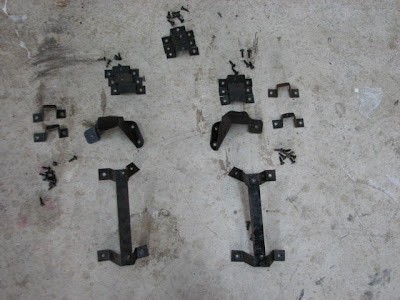 After taking he smaller brackets off, I noticed that even though the part shape was identical, the hole that was made by what appears to be a self-tapping screw were in different locations.  I'm kicking myself because now when I put them back in, I'll end up swapping some of them around until I can get the one in the right place that will line up with the hole in the interior panel.

Next, I moved to the dash.  I was having a bugger of a time getting the light switch out.  The knob was fused to the shaft.  I resorted to my slide hammer to persuade it to come off...and it did...shaft and all.   I got a screw driver in the bezel and took it off.   The switch was then out, but now damaged.  I was going to get a new one anyway since it's hard to tell what condition electrical parts are in.  Plus the shaft came out instead of the knob coming off.   I'll deal with it on assembly.

The other three items left under the dash were the brake/clutch pedal support, the windshield wiper motor and linkage, and the radio speaker.    I got all of them out in about 15 minutes.

I'll get these parts all bagged, tagged and boxed.   The only parts left on the body  are the outside rear seat belts, the interior brackets for the interior piece that goes along the top front of the back window, and the ever-stubborn door strikers.   If anyone has a suggestion or ideas to get those strikers out, I'm all ears.

On another note, some of you may remember my post earlier this spring about finding black primer on the underside of the car.   I took some pictures and posted them.  Well, I sent them off to Mustang Monthly Magazine in care of Bob Perkins who does the "Resto Roundup" monthly article.  I was quite surprised when I opened my June issue and low-and-behold, my letter and one of my pictures was published with the heading "Underbody Finish."

Bob said that all three plants did occasionally use a dark grey or black primer.  He suggested I use a Scotch Brite pad with some lacquer thinner and scrub on an area to see if it's black all the way to the metal.   I did that and it appears to be factory.   I thought I had the photos on the SD card I loaded the pictures on for today, but apparently they're on a different one.  I'll post those later in the week.   I did go to the MCA website, but was unsuccessful in finding the information Bob referred to in his response about the multiple undercarriage primer colors.   It seems like there's all sorts of mysteries about this little fastback of mine.  The cool part is all of this information becomes part of the documentation of the vehicle.  I think I"ll end up with two or three binders full of pictures and documentation by the time this beast is done.

Before I close for today, I got a call from my wife at 6 AM this morning from west Iowa.  My daughter's water broke and they were headed to the hospital in Omaha.   So I should have a new, and first, grandson hopefully later on today.   I already have a start on Mustang swag for Judah to wear.   Got to counteract all the "bow tie" atmosphere on my son-in-law's side of the family!
Posted by deo1929 at 9:13 AM