I has posted my door striker plate dilemma on the Yahoo Classic Mustang group I joined about 5 years ago.  I got all kinds of suggestions, a number of them I already tried.  But today, a guy named Glenn suggested getting a can of computer keyboard cleaner and using the cold spray on the screw head after heating up the surrounding striker plate.   I stopped by Wally World and picked up a can of the keyboard compressed air.  But I needed something with a fine flame.  So I got on the Lowes website and found a mini-propane hand-held torch that's refillable.  It looked familiar and then I remembered...the kitchen.   Once again I raided my kitchen and got my mini-propane torch I use for making Creme Brulee' and other culinary delights, once again reinforcing my believe that a house should be designed around two spaces--the garage and kitchen.  I had an evening meeting tonight, but I couldn't wait to try it out after I got home.  So with fire and ice in hand, I made a last-ditch attempt to free the screws before resorting to the drill.

The first attempt was to heat the face of the striker plate and then blow the cold air onto the center of the screw head.   It didn't work and wasn't as cold as I had hoped.  Then I decided to tip the can on its side so the fluid would be sprayed out with the air.  I got a frigid cold stream but the screw still didn't budge, even after a couple of tries.  OK.

Next attempt was to try it from the back side.  That attempt wasn't successful either.  I played around with different amounts of  times to heat the backing plate and then cool just the threads.  No such luck.   I was afraid that if I sprayed too much coolant on the threads I'd end up cooling down the back plate and not create enough difference in the expansion of the screw and threaded backing plate.   But after a few tries, I thought I had nothing to loose since this is all an experiment anyway.

The next attempt, I used the flame to heat the back side of the plate around the screw and did that for about 30-45 seconds to get it smoking hot--literally.

Then as quickly as I could I grabbed the "ice" canister, tipped the on its side and sprayed across the thread for a good 4-5 seconds hoping I didn't cool down the hot backer plate. 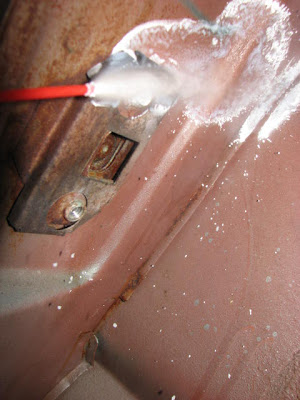 I quickly picked up my impact gun and gave it another shot.  For the first 10 seconds nothing happened and I though it was an exercise in futility.  But then... I saw the screw make a sudden 1/8 turn.  In another 3-4 seconds, it spun free! 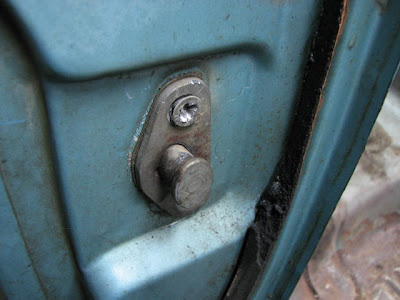 It was finally loose!   Success once again!   It took three cycles on the bottom screw to get it to break loose, but the striker plate is now off the car. 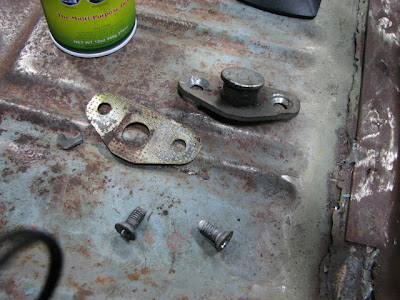 So once again, I have a new learning experience thanks to another Mustang enthusiast.   Now I have no more excuses to get working on the metal work on the body.  Onward and upward!