A couple of days ago, I posted about getting my question about the black primer on the underside of my fastback answered by Bob Perkins and published in the June issue of Mustang Monthly magazine.   He had suggested that all three plants (San Jose, Metuchen, Dearborn) also used  black or dark grey as a primer beside red oxide.  I did find on the MCA (Mustang Club of America) forum and the VMF (Vintage Mustang Forum) similar information.  So this could be an accurate way the car was painted and it's recognized as a proper color by the MCA.   I also learned that not all places on the body were painted primer at the same time.  Apparently they didn't "dip" the whole car as they do today.   The underside was painted separately using a spray bar that applied the primer as the car went down the paint line.  Hence, when you look at the bottom of the floor, that explains the "fisheye" drops hanging from the surface.  It was about coverage, not neatness back then.  The inside of the body was sprayed red oxide primer along with the outside of the body.  A grey primer/surfacer was then sprayed on the exterior of the body for finish sanding and body work before paint.   Next, the body color went on.  Last was the black paint of the engine compartment.  I was surprised about that as I always thought it was done before body color.  That explains the black overspray at the cowl on my fastback.


So now with this information and Bob's suggestion, I took a Scotchbrite pad and some lacquer thinner and rubbed on a couple of placed underneath the car.   I did a spot on the transmission tunnel...


Then I did a spot on the inside driver's side frame rail and got similar results. 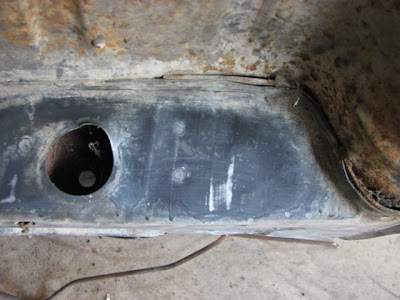 The results indicate that the black is, in fact, the factory primer color.  There was no hint of red oxide anywhere.  So, I suppose when it comes time to repaint the underside of the floor, it's gonna be black.  I have the documentation from both Bob Perkins and MCA's website forum along with the photos I've taken.  I'm sure when the car hit's the show circuit (did I really say that???)  I'll get questions about the underside color.  Now I can support the reason for the color not being red oxide.  It's actually pretty cool.

Here is a picture of the right rear quarter panel just behind the door where I DA sanded the original paint off the car.  You will notice the three distinct layers of paint... red oxide, gray primer, and body color...

I know I'm quite a way out from starting the painting process, but at least I have the information at hand and some of you may find this helpful when you get to the point of painting your Mustang.

One other note I thought was interesting in my research was that starting in 1969, the underside was painted in what was referred to as "batch paint" that consisted of unused body color paint that was mixed in with the primer at the end of the shift.  When cars were painted with this, the underside could be anything from gray in color to shades of green and brown.  It all depended upon what colors were used the previous shifts in production.  It utilized all the old leftover paint and in today's age of the EPA, there was no need to dispose of the old paint in an environmentally unfriendly way.   So in that respect, Ford was really ahead of the times both in material utilization and environment protection.   That doesn't surprise me though because when Henry Ford went into production on the Model A, he had the crates for shipping the frame rails to the factory specified so that the wood type and shape from the crates would be used for the wood structure in the bodies.  Pretty frugal and ingenious guy, that Henry.

On another note...the pesky door strikers

I stopped by Thrifty Supply and picked up a 3/8" #3 Phillips drive socket to try on the screws.  I also picked up a fresh tank of propane.   I decided to try and tackle the driver's side first since I already had one screw out.  The problem I had with the socket was I couldn't apply enough forward force to keep the socket engaged in the screw while turning it.  Bugger.  So I tried the heat approach.  At first, I tried heating the plate itself around the screw head hoping it would expand enough to loosen.  No dice.  So then I decided to heat the back of the screw.  There isn't enough room to heat around it, so I just poured the heat to the threads themselves.   I put the air impact wrench to it and for the first 5 seconds nothing happened.  And then POP and ZIPPPPP as the screw broke loose and the impact wrench spun up post-screw removal.   Success!

I got so excited about it working that I tried the same recipe on the other side.  But alas, no such luck even after a couple of heat and PB Blaster cycles.   I may get a different head for the propane tank that has a finer flame point.  The one I have is really for soldering copper pipe.   I'll try that on the next attempt.  In the mean time, I'm still doing the PB dousing of the threads.   I've sprayed so much on them that I had to put a pan underneath the car to catch all the drippings from the rocker panel.  I won't have to worry about that part of the car rusting out in the future.

With the one striker plate removed, I noticed it has a spacer in between it and the body that appears to be stamped with knurls in it so that when the plate is properly adjusted for correct door closure, it bites into the body and the striker place to keep it from moving.   Here's what the driver's side looks like...


So...I'm getting there slowly but surely on the striker plates.  I still may end up drilling out the screws if I can't get the beat-n-heat thing to work.

But isn't this how it usually goes though?  The parts you think would be easy end up taking up the huge amounts of time while the more involved stuff goes much quicker than expected.  I think I had the engine and transmission pulled in the time it's taken me to mess around with these *blinkity-blank* striker plates so far.  But that's all part and parcel to the restoration game.