It's been a hectic couple of months.  From my last entry, you know life has changed for me in regard to what I call "vocation."   Spending a month getting the church and leadership ready for my departure and making sure that everything was in order as humanly possible was exhausting physically and emotionally.   These people at the church have been my extended family for over 13 years.  It was the same when I left Trane Co. and Sylvania.  You work with people on a regular basis and develop relationships that to this day still last.

February was spend in transition setting up my home office, traveling to Edmonton (where it was warmer there than in central Indiana!), and getting ready for my Commercial Pilot license checkride.  Another month that took a physical and emotional toll.   My checkride is supposed to be a week from tomorrow on March 7.  The FAA designated examiner is the recently retired President of the Indianapolis Airport Authority and an aviation specialist attorney with a large law firm in Indianapolis.  Without naming names, let's just say he has a reputation for being tough and sometimes unfair.  I can't wait!

But in the mean time of all this life madness, my baby is perched on the rotisserie out in the garage awaiting further work.  She's been on that device for three years and a week to the day.  That's an embarrassing 1102 days!  (I finally surpassed Sven on something...but not in a good way.)   So my mind turned to my fastback of late.

While contemplating when I can get to work on her, I get an email from CJ Pony Parts with a 30% off carrot hanging out there.  I've gotten these before from CJ,  NDP,  Year One, and just about every vendor who peddles Mustang parts.  So I thought, "I'll take a look and see if the prices are that good."  Well, they were after spending time on-line perusing the other offers.   I had a pile of Christmas cash sitting in my stash box I keep for such expenditures.  With my "wish list" put together, I pulled the trigger and placed my order.  And for what, you are asking?  This... 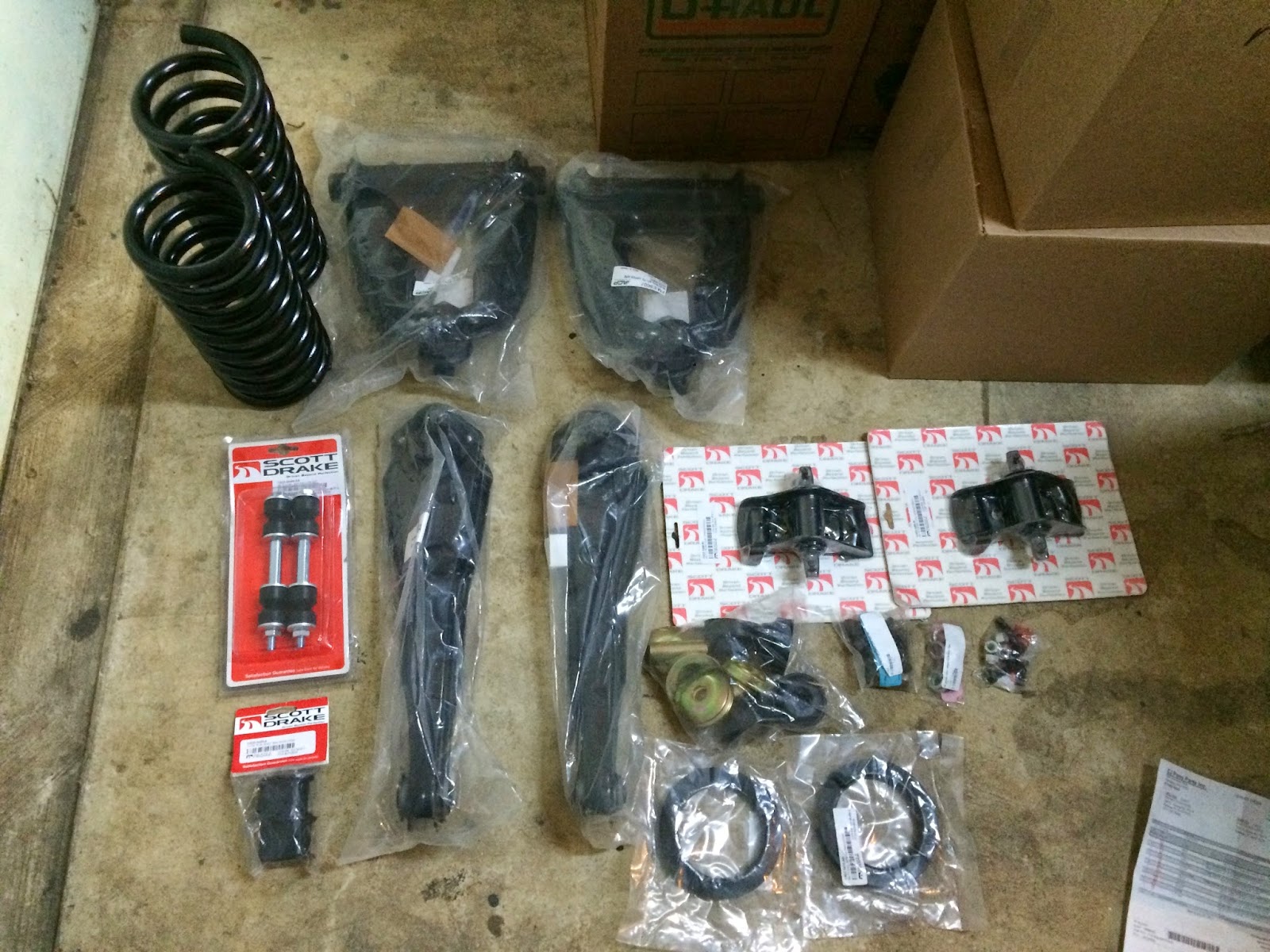 It's every part necessary to put the front suspension back together minus the steering components.  I haven't yet decided what to do there, but the rest of it I was sure of.   What made this deal so good was the discount on the Scott Drake parts which is everything you see pictured except the bolt kits.  I got the 1" lowering springs instead of stock.  I'll see how the car ride height is with them before going with the Arning drop.   So why go this route?   By the time I priced replacing the bushings, shafts, and ball joints in the original control arms, I was already 75% of buying new and still had the labor to do the rebuild.  Based on my previous performance on time, it was a good solution.   Now I need to get by butt in gear, get the garage sorted, and get back to work on the fastback.  After all, the clock is ticking toward June when I'll be in Canada for 3 months.

Speaking of that, part of my new position is to meet with supporters and donors to the ministry.  In an email from my boss, he asked if I'd be willing to go to California and meet with one of them.  He gave me name and the link to the website of this guy's business.   I stared in disbelief when I saw who it was...  Ed Moss.   The Ed Moss who founded Total Cost Involved engineering, or as I know it as TCI.

For those of you who don't know him, he was the one who really got the hotrod reproduction frame industry going with his 1928-1931 Ford Model A frames and components.  But since starting the business, he has graduated to a full line of chassis and suspension components, for not just early Fords but including...are you ready...vintage Mustangs!   Check out his website here.

Yeah, he also sells "bowtie" stuff, but his heart is with the Blue Oval.  He has built one killer 67 fastback that is also the "mule" car for his front and rear suspension kits including those who want to put a Coyote modular V8 in their pony.   Here's the video of the car at 2013 SEMA...

So here is a guy I bought my '29 Ford hotrod rear suspension from...and he has a Mustang fastback of my body style.   Chance meeting?  Luck?  I think it's more divine intervention.

It took all of  .6 second reaction time to respond back to that email with "Yes!"   So sometime in the next couple of weeks, I hope to be winging my way to Ontario, California to meet face-to-face with Ed.  Who knows?  If we hit it off, which would be hard not to, I not only have a donor to keep me flying up north, but a great relationship with a fellow car guy and friend.

Now there's more incentive to get back to work on my Mustang.  A pile of new parts on the floor...A possible meeting with Ed Moss...and a running clock.