After more than a year, it's A Done Deal!

This last Saturday was "D" Day for me...or maybe it should have been called "C" Day for my Commercial pilot exam.  After hours upon hours of study and flying (not to mention the $$$ expense), I got signed off by my flight instructor for the "checkride".

This has been something that I've dreaded, in part because I knew who would be the designated pilot examiner (DPE) doing this checkride.   He is the newly retired President of the Indianapolis Airport Authority.  That is the group that manages and controls not only Indianapolis International, but all the satellite airports, of which there are 7.   He is also the lead aviation litigation attorney at a major law firm here and has several thousand hours of flying under his belt.  He had a reputation of being hard but unfair.  That supposedly has changed in recent years to him being hard but fair.  Anyway, I was sweating bullets over this whole exercise.

Then the plot thickened.  The designated examiner called and asked if it was OK for an FAA examiner to observe the checkride.  Apparently all DPE's have to go through an annual review by the FAA to make sure they are doing things correctly.  Great.  Not just a DPE but an actual FAA guy there to boot.   The only good news was that the $325 fee would be waved.  I'll take what I can get at this point.

The there was a twist in the plot two days before the exam.  I got a call from the DPE I was supposed to fly with. There's another examiner that needed his recertification by March 14.  So I was asked if it was OK to switch to this different guy...who is an x-ATA airline captain, owns is own charter operation...and also an attorney. So I guess I was trading the devil I sorta knew about for the devil I know nothing about.  At this point I thought, "What the heck!  Sure. And while you're at it bring a red hot poker to stick in my eyes too."

Saturday arrived along with the my flight instructor, the DPE, and the FAA examiner.   We went into the conference room and I laid out all my paperwork and that of the airplane.  After getting that done and verifying that I had met the requirements and the airplane did too, we got down to the business of the exam.  Cross-country trip planning including weather, airplane performance and systems, emergencies, etc.  I survived that part mostly unscathed.   Then it was on to the flying.

The FAA guy said he would observe my takeoffs and landings from the ground.  So after a preflight, the DPE and I got in the plane and headed for the runway.  The winds were howling out of the southwest at 14 miles an hour gusting to 22...and it was at 90 degrees to the runway.  Perfect.

Well, I managed the short-field and soft-field takeoffs and landings fairly well.  It was a foot dance on the rudder pedals to keep the plane pointed down the runway and on the center line.   With a radio call to the terminal, the FAA guy was satisfied and left.  Then the DPE and I headed out to do the other tasks as specified in the FAA Practical Test Standard.  Low and behold, I managed to survive that and finally, finally, earned my Commercial pilot certificate.  I got a temporary one until the real one shows up in the mail in the next 4-6 weeks. 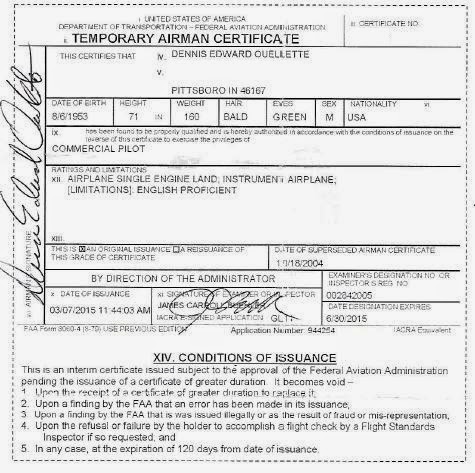