It's been a couple of weeks since I had my "2-fer" weekends working on the car.   I had to take a break since we were doing a semi-major kitchen upgrade to replace our counter tops that were in rough shape.  They had taken years of abuse from cooking and using the kitchen sink for every project around the garage and house.   They were stained and bubbling in places.   So with a really good sale at Lowes on granite we pulled the trigger and ordered it.  3 weeks later, it's ready for the install.  But it didn't go without some hiccups along the way.  In spite of a laser measurement by the stone company, one cabinet needed to be releveled if I didn't want a 1/4" gap.  I fixed it, but then the back splash didn't fit, a point I raised with the company before they cut it based on their laser measured drawing.  After 3 tries and 6 days, the kitchen was back together.  Then I discovered that the new undermount sink put it a good 3-1/2" deeper than the old top mount sink.  The plumbing drain lines were too high.   The only fix was to cut through the back of the cabinet and into the wall and modify all the PVC piping.   I got that done and then cut into the utility room wall for the drain line for a new utility tub  in the utility room (not using the new sink and counters anymore!)

So now, after I have finished the kitchen counter demolition, base cabinet leveling, plumbing, installing a utility tub, and acid washing the tile floor and sealing the grout, the garage was a mess and needed some serious purging of old kitchen pieces parts.  Good Will and Ray's Trash took care of the leftover kitchen hardware.  A trip to the recycle center purged the pile of corrugated boxes from sinks and garbage disposal.  A broom and compressed air got the sawdust managed.  And all the tools used for carpentry, pluming, and electrical got put away.  Now the garage was mine once again.

Sunday afternoon was fairly warm and nice.  After I got home from a presentation of LAMP  (you can check out the organization here)  at a church a couple of hours away I had some time to get a couple of hours in on the fastback.

At my last post, I started to apply the filler with success and started working on that.  But I noticed that I was getting a thin layer of flash rust on the floor where it was bare metal.  I guess it's my fault as I expected to have this in primer long before now...the story of my life, right?

I bought some Eastwood "After Blast" which is a mild etching and phosphate coating product that is used after media blasting or cleaning metal that can be painted over.  I put some in a spray bottle and coated about a 2 foot section at a time, let it sit for a few minutes, and then wiped off the residual product.  It did a really nice job of bringing back the color of the metal.  I worked from the base of the firewall back to the rear of the car including the wheel housings.  It looks pretty good even if I do say so myself... 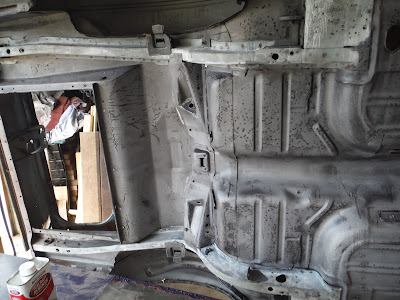 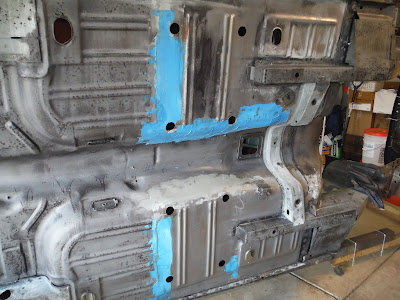 I really didn't want to get into the whole body filler thing and the hood had been leaning up against the back of the garage for months, I thought I'd go ahead and start the stripping process on it since the front fenders are done and I want to get as much of the car in primer before my long summer departure.

A small 1' x 1' section of the hood had been stripped using one of the 4" stripping pads on my grinder.   I thought I'd give the quart of "aircraft stripper" a shot to see if it would speed up the process of ridding the hood of the old paint.

Well, it did get rid of the layer of blue paint, but left what appeared to be a coat of brown primer/sealer. 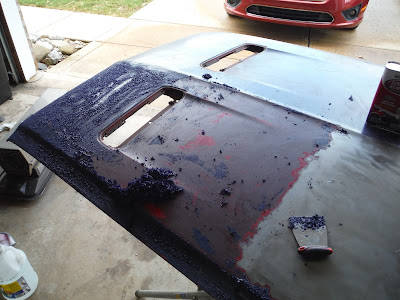 Round 2 got the primer off down to a layer of red paint that was the original color of the hood. 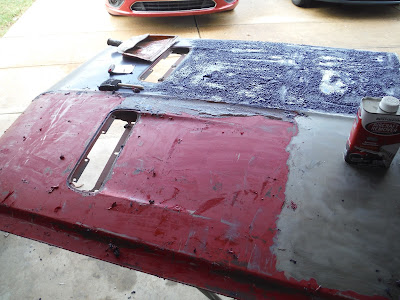 When I put the stripper on the red layer, it did absolutely nothing!  Even letting it sit on it for 15 minutes, there was not even a wrinkle of bubble in the paint. So it looked like mechanical removal of that layer was necessary.  I got out my Kobalt 6" DA sander and started the laborious task of stripping the red off.  An 80 grit pad didn't do much.  A 40 grit pad worked as long as I was judicious on how aggressive I got with the pressure.  The problem was the sander kept throwing the pads off.  It has the head for pads with adhesive backing.   I went through 3 pads in 2 minutes.  I cleaned the surface with acetone and tried again.  It was better but it would only keep a pad on the backing head for 5 or 6 minutes.  After 4 or 5 repeated head cleaning and pad replacements, I put a new pad on and hit the trigger to start up again.  Nothing but air blowing through it.  I had to take it apart to find out what happened to cause it to jam.  I didn’t’ see anything, lubed it with air tool oil and put it back together.  It worked…for about another 10 minutes when I replaced another thrown pad.  Then it stopped again.  I spun the head by hand in both direction and tried it.  It started to work, and then threw the pad off again.   Put a new pad on it and then it wouldn’t work again.

Well, suffice it to say that the Kobalt DA sander is no longer functioning and in the metal recycle bin.  I decided to revert back to my 4" stripping pad even though it takes more time.  I got about 2/3  of the hood stripped before calling it quits to a dusty, frustrating work session.  But what's done on the hood looks OK.  I treated the bare metal with "After Blast" to keep it from flash rusting. 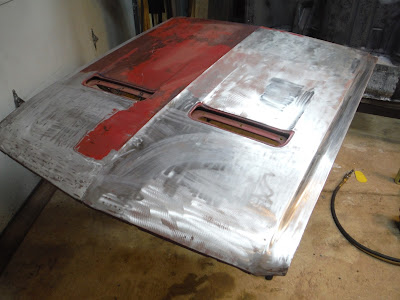 I'll probably replace the DA sander since I really need it for all the body work yet to do on the Mustang.  I can guarantee Lowes will not the place to buy air power tools (and don't get me started on Harbor Freight!).  Home Depot has Ingersoll Rand products and I'll be checking into one there.

In the mean time, the clock is running and what's left before my month of heavy travel in April is quickly slipping away.  I have a training session and presentation to make in Wisconsin this weekend.  Then leave Monday at 6 AM to fly to Cross Lake, Manitoba to help the community there with a state of emergency dealing with youth suicides (you can read about it in the news article here)  It's a tragic situation, but unfortunately one that's not so uncommon in isolated parts of First Nations communities in Canada.  I'll return to the states Thursday night and then collapse.   I might get a chance to work on the fastback again Easter weekend but I'll probably be catching up on stuff for work and home before my crazy April travel schedule kicks in as I'll only be home 8 days that month.   But in the final analysis, people's lives are more important than restoring a classic car.