Just when I thought things were settling down in my life, another project rears its ugly head.  One of our flying club members was out getting his currency back in our Cessna 172RG.  On a "touch and go", he inadvertently raised the landing gear instead of the flaps.  He realized his error almost as soon as he moved the landing gear handle, but it was too late.  The nose gear hydraulic valve opened and it retracted.   Ouch!  (an expensive ouch!)  Being the maintenance officer for the club, this now falls in my basket to take care of. 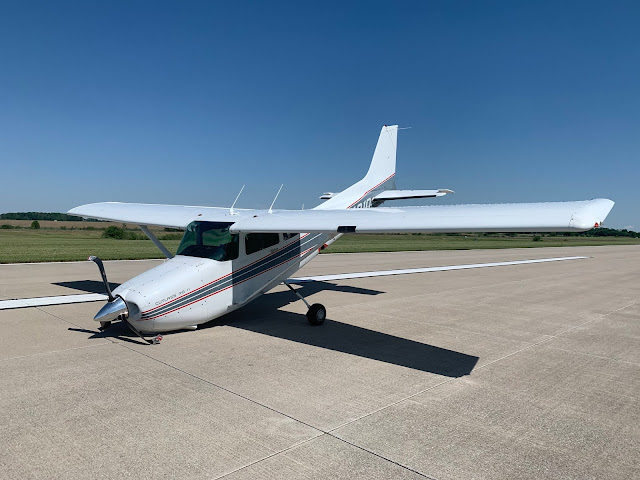 The FAA called it an "incident" and not an "accident".   After the FAA showed up at the airport and did its investigation, the plane was moved to its hangar.  Because it was an obvious prop strike, the engine requires a mandatory tear-down.  The prop will have to be replaced along with the nose gear doors. 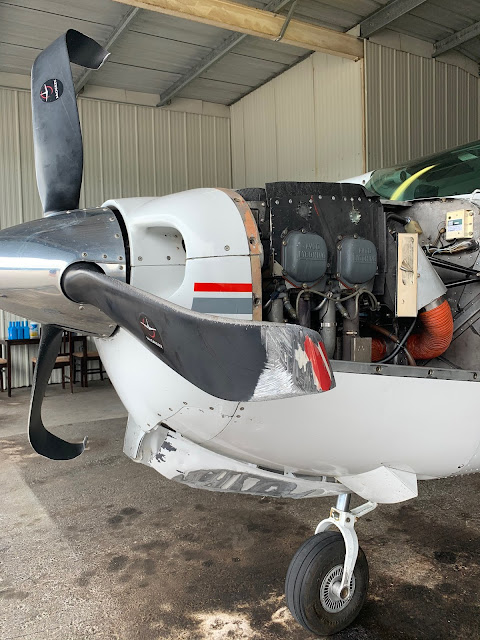 So...when it's all said and done, the insurance will pay us $44K for the repairs.  The club decided that with almost 2000 hours on the engine, we will add funds from our engine reserve account and have a new engine built.  I'm still waiting on the new prop to arrive.  The engine that we will do an exchange on is underway.  The gear doors are on order.  Hopefully, there will be no hidden damage, but the claim will be open until the work is signed off.
Beside this, I was also responsible for a major avionics upgrade on our Cirrus.  We installed a glass panel to replace two key instruments.  That required a ton of rewiring to upgrade. 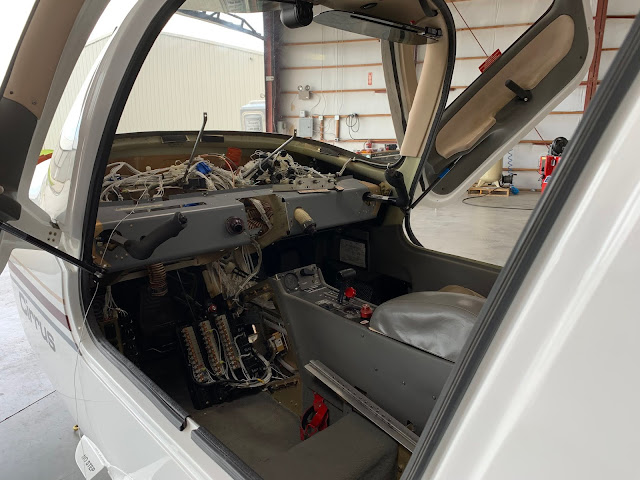 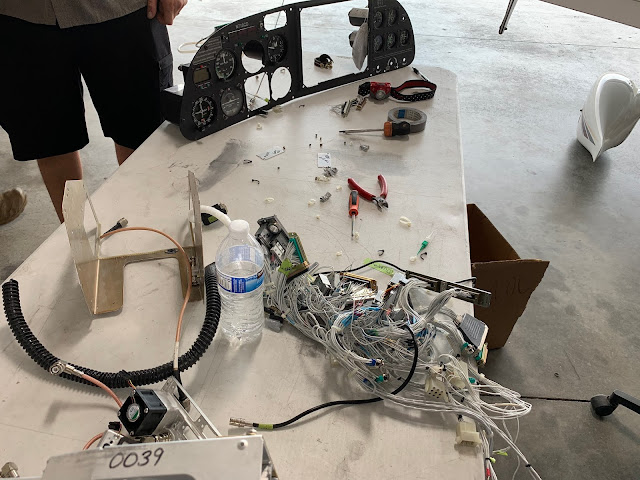 After 2 weeks of wiring and installation, the new Aspen ProMax PFD (Primary Flight Display) was done.  Well, sort of. 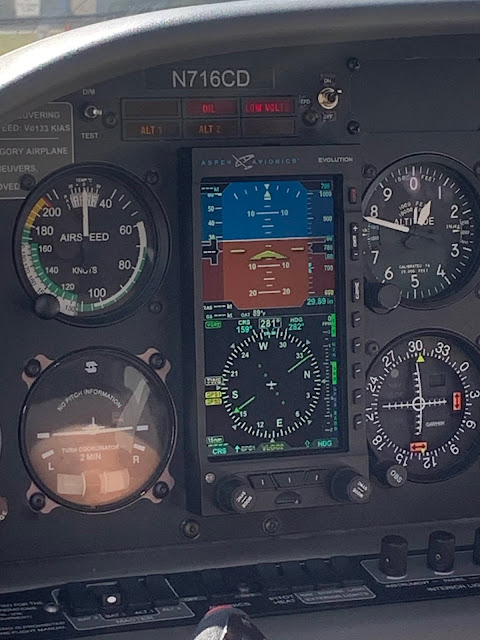 We had several post-installation bugs to get worked out.  There is still one major change left that will be done next week.  Then I can hopefully put this project behind me.
On to the Mustang.
I was getting quite frustrated trying to get the hood aligned.  I enlisted a friend of mine (He's building a '55 Bel Air).  One struggle was trying to adjust the hood against the hinges with the spring tension.  I have a subscription with the Classic Car Club and saw a video on rebuilding hood hinges.  The video showed using a coat hanger to pull the spring off the hinges.  It worked really well.

This made it much easier to move the hood around.  After 20 minutes of trial and error, the hood alignment was spot on.  All the gaps were just right, at least for the level of restoration I was looking for.


Now that the hood is in it's proper place, I will be drilling 1/8" holes through the hinges into the hood under the upper mounting bolt shoulders to hide them.  That way, it will be much easier to put it back in place after blowing it apart for paint.  Whew!
The front valance is one of two I got when I bought the hood hinges and front fenders off a "Flintstone" '68 Mustang convertible.  As rust-free as it is, there are still some dents and dings to remove. 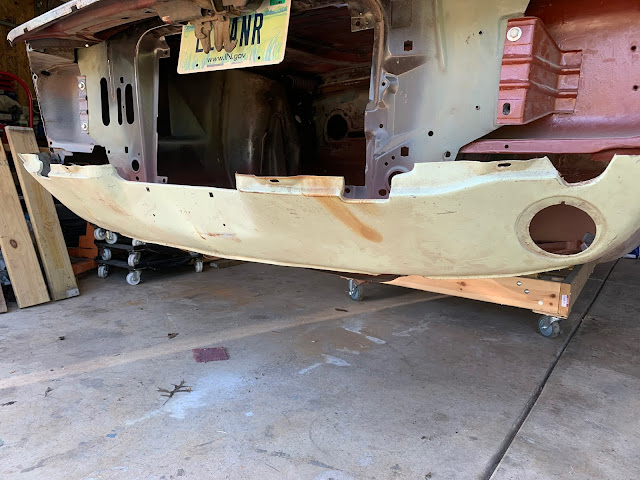 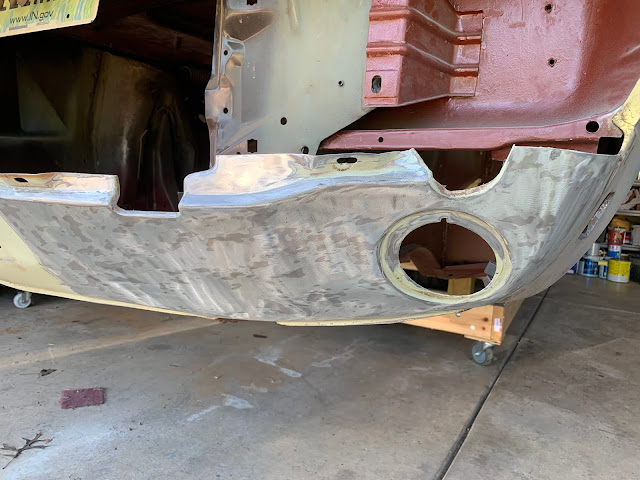 While removing the paint, I discovered a few places where there was a layer of body filler.  Ok.  So now there are more dents and dings to remove.  After some contemplation, I decided that I would try and massage this valance instead of buying a repro unit that may not fit as well. 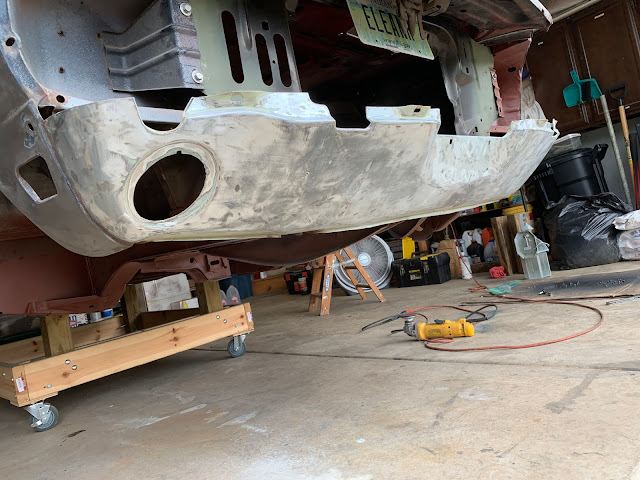 So that's as far as I've been able to get on the fastback for the time being.  I hope to get back on it soon after I get caught up on a couple of more house and airplane projects.   At least it's going in the right direction.
Until the next time...
Posted by deo1929 at 4:56 PM