With the gaps set on the front fenders and hood, the body work began.  I'd already done some work on the hood with the stud welding gun but it still needed some more massaging.  The fenders were from a '68 "Flintstone" convertible.  I've covered them in previous posts a long time ago.  I'm going to divide this post up into 2 parts.  The first post will be the hood.  The second will be the fenders.  I was working both simultaneously as I waited for filler to set.  But it will be more clear about the work done by dividing them up.

This hood was from a '67 and was in fairly good shape...until I had a gust of wind came through the open garage and knock it over onto the outside surface shortly after I purchased it ($100).  (Insert colorful metaphor here)   Hence the stud gun to help get the center peak back close to original shape.

Each of the corners had some minor rash to fix as well.  They were small areas, but unfortunately with compound curves making it more of a challenge.  The 2" air sander prepped the areas nicely.

Of course, the holes where the"FORD" letters were in the hood had to be filled.  In '68, Ford deleted the hood letters.  This was fairly quick work for the 'ol Hobart MIG welder.

The first layer of filler to go on is used as a guide coat to indicate areas that needed more metal work.
The peak pulled out for the most part, but it did not remove the "puckering" of the metal on each side. 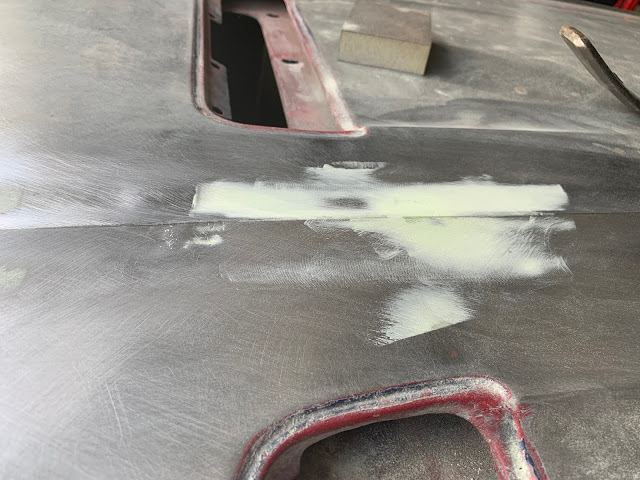 With the supporting structure underneath, it's hard to get to most of the back side.  I resorted to using a spoon with the underneath supported by a 2x4 since there was too much distortion to apply any usable pressure. 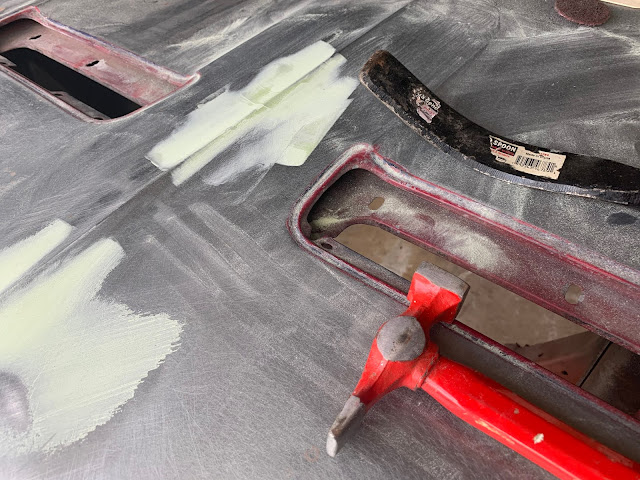 This approach worked well enough that I could round out the puckered areas that were higher than the surrounding metal. 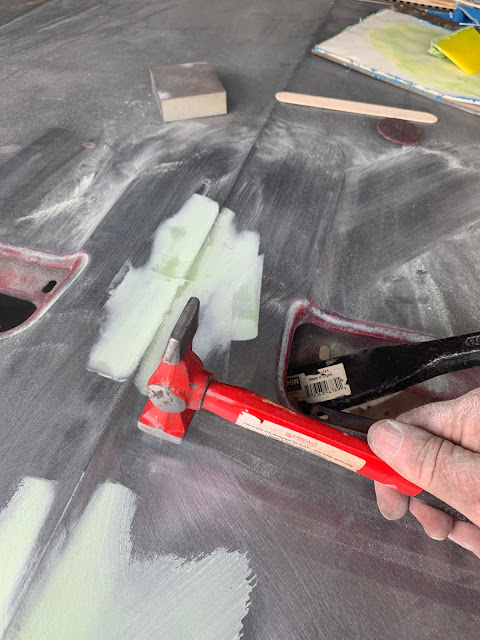 This process took about 3 rounds before the metal and filler started to level the area on each side of the hood peak. 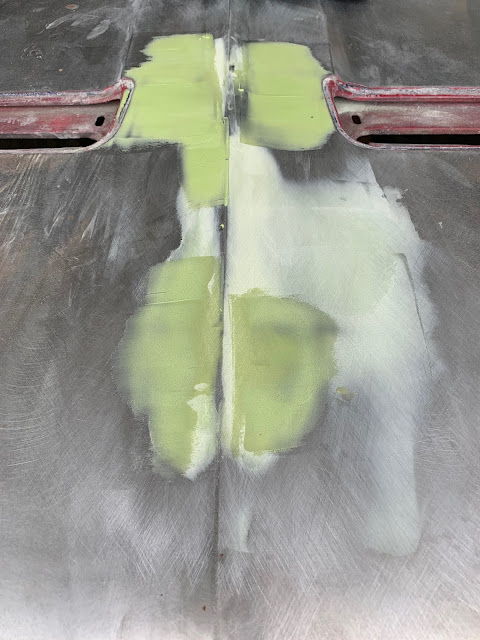 While waiting for filler to cure in the center of the hood, I worked on the two front corners. 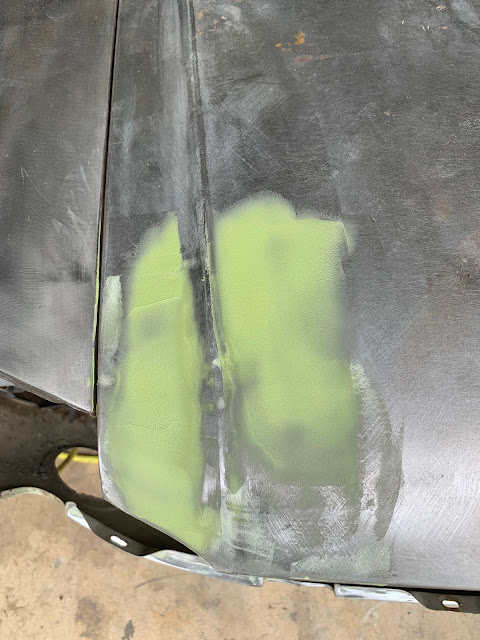 After getting the corners worked on, filling in the letter holes, and getting the hood peak filled and sanded to their contours, I sprayed on guide coat to check with my eyes what my hands couldn't detect.
The guide coat really shows the imperfections and true contours including all the high and low spots.  That means another couple more rounds of filler, sanding, guide coat, sanding, etc. until the guide coat is mostly gone without leaving either bare metal or filler (High spots) or guide coat remaining (low spots)

It took a total of 3-4 rounds of this back-and-forth between filler and guide coat until everything started to take proper shape.  The goal was to get it as close as possible so that the primer-surfacer would be able to take care of the rest when that step came. 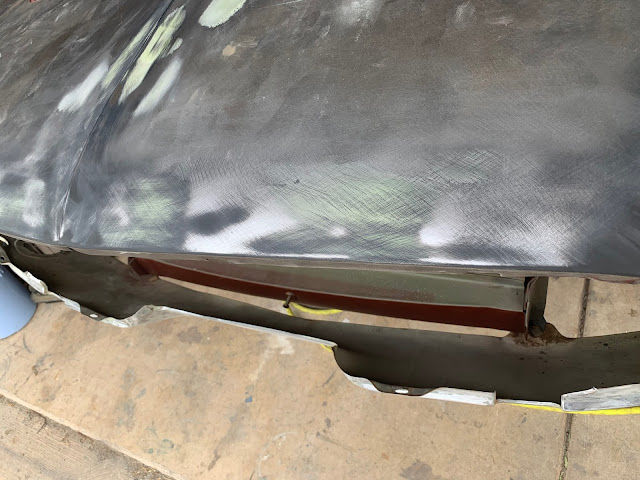 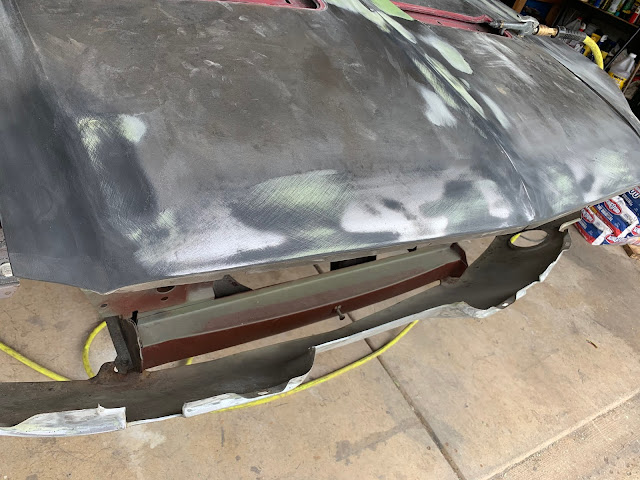 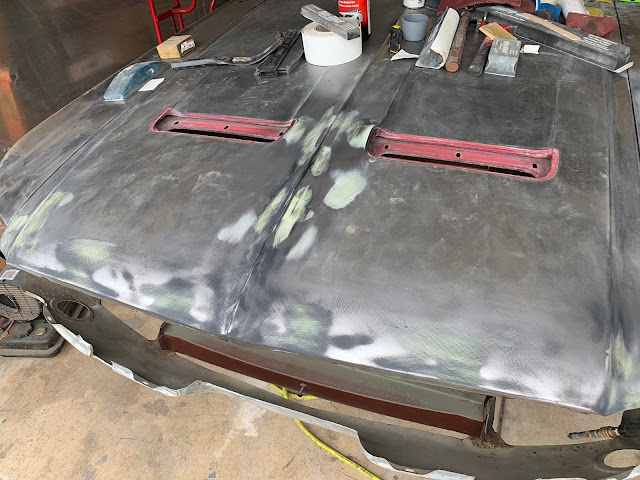 With the hood done about as good as I can get it, I needed to spray on a primer so the surfacer will have something to stick to.  All the manufacturers specify this.  Since I had 3/4 gallon of DP74, I figured I might as well use it.
I had to sand the entire surface of the hood, which it needed after sitting in bare metal for quite awhile.  That revealed a couple more spots that needed to be leveled and filled.  Another couple more rounds of sand and fill, and the hood was ready for primer.  This would be the first "color" that would be on the outside surface of the body, a milestone indeed.
I masked off the fenders and cowl area in preparation for epoxy primer. 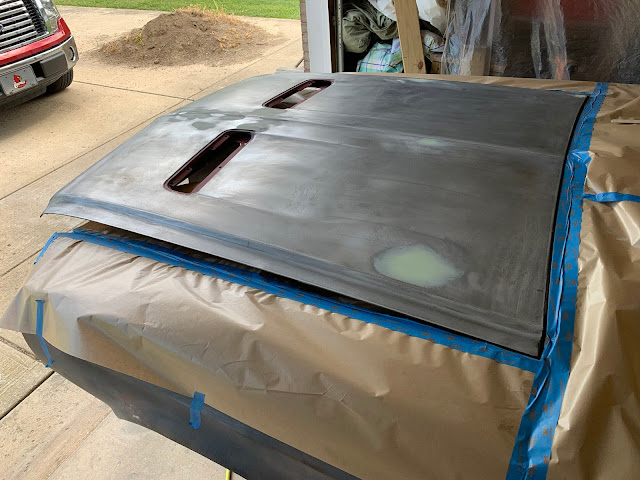 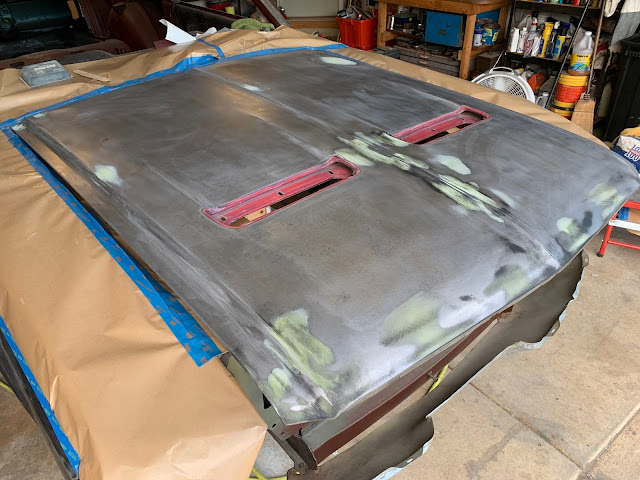 I was having issues with the air supply and it took some trial and error to sort out the issue.  I'll need to get a shorter (25') air hose to paint in the future as the 50' hose had too much pressure and volume drop.  Because of that, and the warm temperatures, the primer didn't flow out as nicely as I would have liked, but I'll end up block sanding it before the surfacer can be applied.  In spite of the issues, I was glad to see the hood in one color and looking pretty good. 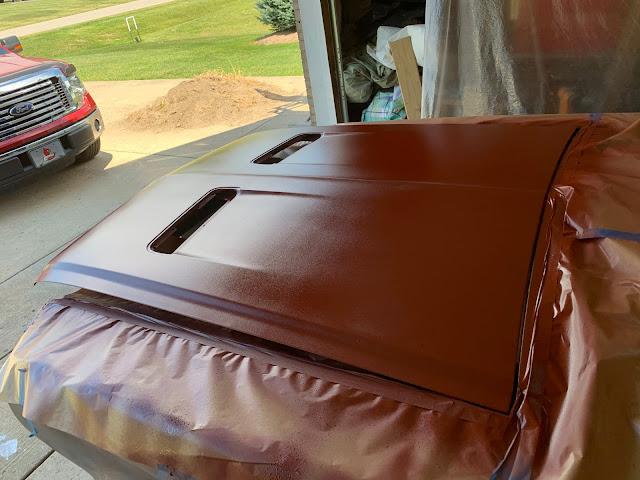 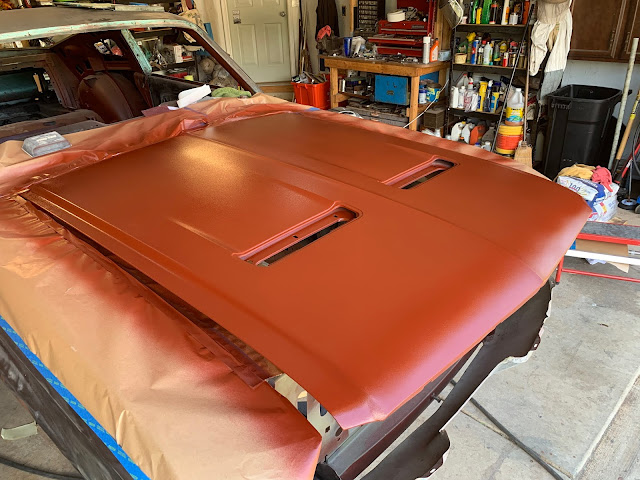 Once I get the rest of the body work done and in epoxy primer, I'll block out the whole care and then spray it entirely with the surfacer primer.  This is going to be a long, long process.  The work on the hood probably took a total of 8 hours from start to epoxy primer.  But I can't knock forward progress.

Next up will be the front fenders.